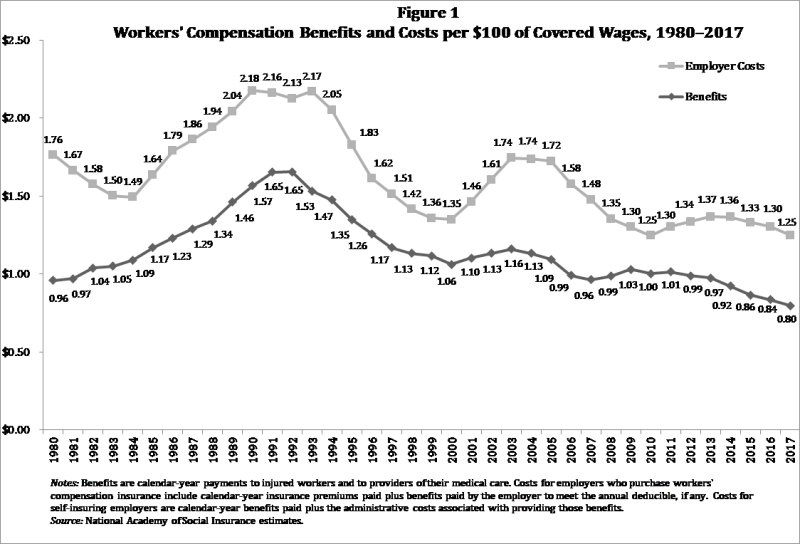 This year, I had the honor and privilege of serving on the National Academy of Social Insurance Workers' Compensation Data Panel. Twenty-three panel members from various backgrounds and policy perspectives (including my blog mate Judge David Torrey) scrutinized data collection over a period of several months and then met in early November to debate, discuss, and refine findings and thought about findings. It was scintillating to this evolving policy wonk. The panel makes every attempt to be a neutral body. Of course, everyone operates through a series of cognitive biases and honest brokers reveal those biases in advance. I think everyone who reads these pages from time to time understands that I am biased in favor of injured workers. When I smell a rat, I say so.  I'm not embarrassed about choosing a side or about choosing the particular side I've chosen -- I conjecture there are plenty of advocates out there who can make the case that what is good for their respective clients is good for America. I made my choice a long time ago.

Still for all of that -- the chart above seemed to rankle certain workers' compensation observers. What does it show? It's very simple. The benefits for injured workers per $100 of payroll continues to go down. The costs for employers per $100 of payroll continues to go down. Now you and I can have a debate about why that might be so. But that is what the numbers show. You might argue that the metric itself is flawed. Maybe you think that benefits and costs per $100 of payroll is a meaningless statistic. Of course, if you have that view you would be in opposition with NASI panels going back several years and, by the way, the use of the metric by other governmental agencies. But, of course, you have the right to disagree with everyone -- I do it all the time. The full NASI report is here, and in my humble opinion is essential reading.

Some critics of the current report seemed to be complaining that benefits can't be decreasing all that much because since the 2012-16 Oklahoma drama there have been no major incursions on the workers' compensation citadel. In a way, I agree with them. Creeping erosion has been the norm. We won't see more opt-out drama until the next severe economic downturn. When that comes--and it always will--the same questions we were considering in 2016 will once again be front and center. I am always amazed at how very intelligent people can talk themselves into the proposition that the 2016 tumult was a tempest in a teapot. I hope you will remember (when the time comes) that this observer thought that, when times get especially bad, the first question an employer might pose to a legislator is, "why do we have to have this expense at all?" If you think there is a clear answer to that question, I respectfully respond that you are wrong. Legal and social consensus is always much more fragile than contemporaries imagine.

The outgoing Obama Department of Labor produced a 41 page report titled, "Does the Workers' Compensation System Fulfill its Obligations to Injured Workers?"  My answer to the question is, of course it doesn't. But if I'm going to be intellectually honest I have to concede that the answer depends on the premises that 1) there is a broader social obligation to injured workers and 2) we have some kind of consensus about what is meant by fulfillment.  It is on point number 2 that I think we have tremendous disagreement. Some believe that workers' compensation is a bare, anti-destitution safety net program. Others believe that because injured workers have forfeited valuable tort rights something more than starvation wages is required.

Forgotten in the clamor is the point that the National Commission in 1972--chaired by the esteemed John Burton and peopled with members who could hardly be considered anti-business--concluded, at the risk of oversimplification, that workers' compensation was inadequate and thought that federal intervention could be in order in the absence of significant improvements. To me, that is the correct context in which to view the chart above -- but that is one man's opinion. The DOL report discussed the National Commission's 19 Essential recommendations and discussed the six focus areas of those recommendations only two of which I'll mention here:

In my day, I was a fair to middling trial attorney and was schooled by excellent mentors to sit down when I'd made my point. You'll be the judge of whether I have. I'll merely point out that the graph above begins only eight years after the Commission's report was issued -- and the graph does not seem to reflect a system that could possibly be improving from the perspective of injured workers.


This blog is an Amazon affiliate. Help support Workers’ Compensation Law Prof Blog by making purchases through Amazon links on this site at no cost to you.