As I have been arguing for some time, there is no doctrinal reason employers could not subject workers' compensation claims to mandatory arbitration. Alexander Colvin has just updated his 2017 report on the expanded general use of mandatory arbitration agreements by employers. He argues in an executive summary to the report, "Under such agreements, workers whose rights are violated—for example, through employment discrimination or sexual harassment—can’t pursue their claims in court but must submit to arbitration procedures that research shows overwhelmingly favor employers." The key findings of the report are:

I was especially struck by the finding that the growth of mandatory arbitration has been accelerating in the last five years.

For employers who have adopted mandatory arbitration, the survey asked them how recently they had adopted this policy. Among the employers with mandatory employment arbitration, I find that 39.5 percent of them had adopted their policies within the last five years, i.e., from 2012 to 2017, whereas 60.5 percent had adopted their policies more than five years ago. This cut-off date is important because it was in 2011 that the Supreme Court issued its decision in AT&T Mobility LLC v. Concepcion, ruling that class action waivers in the mandatory arbitration agreements were broadly enforceable. This means there was a substantial growth in the adoption of mandatory employment arbitration during this five-year period following the Supreme Court giving a green light to the use of mandatory arbitration clauses to bar class actions.

It is also interesting to note the density of mandatory arbitration by state (see below). I find it unsurprising. What readers should consider is why this trend would stop at the hallowed gates of workers' compensation. All I can say is that I find no legal reason it would do so. The FAA preempts all sorts of state law very broadly. And though it is useful to follow the tea leaves for reversals of policy, I am perpetually alarmed that the workers who are not transformed into independent contractors as "Gig" workers, will be swept into arbitration by the FAA. 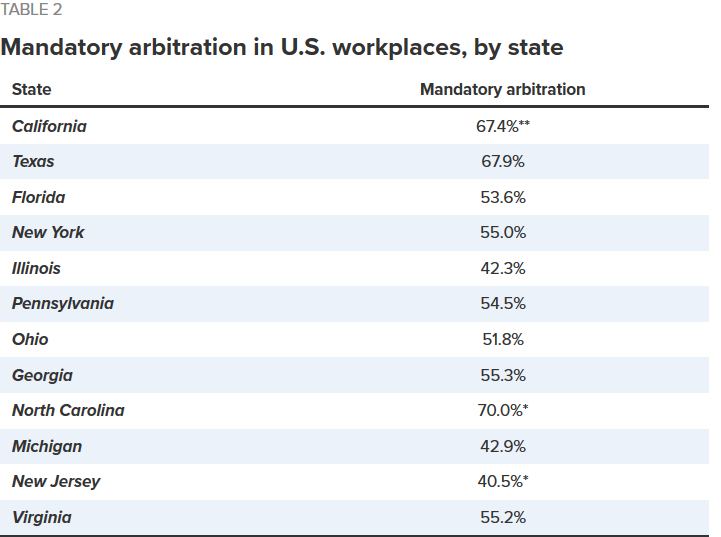 
This blog is an Amazon affiliate. Help support Workers’ Compensation Law Prof Blog by making purchases through Amazon links on this site at no cost to you.