A Chicago man passed away without a will, leaving behind the largest unclaimed estate in United States history. Investigators spent years pulling records to compile a family tree of possible heirs to distribute the $11 million estate. They found 119 distant cousins, none of whom knew Joseph Stancak.

The distant relatives live all over the world, between Poland, Slovakia, Czech Republic, Germany, the United Kingdom, Canada, and the United States. After compiling the results, attorneys are left with a scroll of the family tree that is 15 feet long. 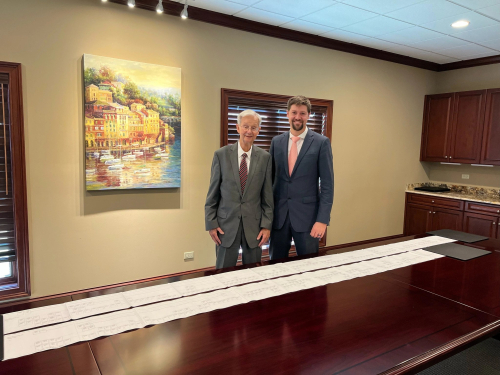 It will take one to four years to disturb the money to each relative, with the average check in the $60,000 range.

Tragic Aaron Carter ‘died without a will’ leaving the state to decide who will’ inherit his assets including $800,000 house which he had out on the market shortly before his death

Former teen hearthrob and singer, Aaron Carter, passed away earlier this month. The 34 year old was found by his housekeeper on November 5th, and died without a will in place. This leaves the division of his estate up to the state of California.

Carter began performing at age nine, had three bestselling albums by age thirteen, toured with Britney Spears and performed with the likes of Liza Minelli, Gladys Knight, and Missy Elliott. He later transitioned into acting and went on to experience a series of public controversies and struggles in his young adult years. Insiders told reporters that Carter quickly spent whatever money he made.

It has been reported that Carter was advised by his attorney to make a will upon the birth of his 11-month-old son Prince, whom he shares with his ex girlfriend, Melanie Martin. Carter was looking to resolve his custody battle with Martin before entering rehab. He had previously admitted to having a huffing addiction.

For more information see Jack Newman “Tragic Aaron Carter ‘died without a will’ leaving the state to decide who will’ inherit his assets including $800,000 house which he had out on the market shortly before his death”, Daily Mail, November 14, 2022.

Special thanks to Joel C. Dobris (Professor of Law, UC Davis School of Law) for bringing this article to my attention.

Joseph Stancak was 87 when he passed away in 2016, leaving behind no obvious heirs to his $11 million estate. This is though to be one of the largest unclaimed estates in the United States. Stancak made his fortune in large part through mutual-fund investing.

A team of lawyers is preparing to distribute his estate among 119 distant cousins who never knew Stancak. Many were surprised to be contacted by the estate lawyers who informed them that they will receive around $60,000 after taxes. All six of his siblings all predeceased him, meaning attorneys had to go through five-generations of his family tree to find heirs in Poland, Slovakia, the Czech Republic, Germany, the United Kingdom and Canada. There are additional relatives in the Chicago area, Iowa, Minnesota, New Jersey, and New York.

This is a further reminder that estate planning is not only for the elite. Any asset, from a bike to a private airplane, will benefit by being addressed in a will.

While Tupper is the biological father of the 13-year-old, he submitted in his filing that he loves both boys “as a father and wants the best for both.” He revealed in the filing that he will object to Laffoon’s petition to take charge of the estate, stating that he is unsuitable to run the estate and is seeking an independent administrator instead.

According to Tupper, Laffoon was estranged from his mother at the time of her death and his since changed the locks on the apartment she shared with the 13-year-old son, refusing his younger brother access to his belongings. Laffoon has responded, calling these claims “unfounded personal attacks” and “frivolous legal claims.”

Special thanks to Joel C. Dobris (Professor of Law, UC Davis School of Law) for bringing this article to my attention.

Anne Heche estate battle begins as ex James Tupper claims he was left in charge, not her 'estranged' 20-year-old son

The dispute over Anne Heche’s estate has begun to heat up over who should be in charge after the actress died intestate. Her eldest son, Homer, requested to serve as special administrator last month, however, now her ex is contesting Homer’s appointment.

James Tupper, the father of Heche’s youngest son, claims he has a “will” from January 2011 that was given to him “in case [Anne] dies tomorrow.” Additionally, he has expressed numerous reasons why he does not believe Homer is equipped for the job, one being that he was estranged from his mother when she died.

The 2011 “will” is an email sent from Heche to Tupper and entertainment attorney, Kevin Yorn, with the request that it serve as her final wishes until formal papers could be drawn up. This email dictates that her assets would go to Tupper to manage and divide amongst her sons equally until they reach the age of 25. At that time, they could sell her real estate and split the money.

Another shocking claim to arise from Tupper's filing is that Homer has changed the locks on his mother’s apartment where she and her younger son resided, and has listed the residence as “vacant” in the court filing. Tupper notes this is “concerning as her home had previously been full of furnishings, jewelry, valuables, files, and records and their removal was in no way authorized by the Court.”

Anne Heche died without will, son files to control estate

Actress Anne Heche, who was declared brain dead on August 11, died as the result of a car crash that had occurred a week prior. She died without a will.

Her oldest son, Homer Heche Laffoon, has filed papers to control her estate in Los Angeles Superior Court on Wednesday. Laffoon, 20, also lists his younger brother and his mother’s former partner, James Tupper, as heirs. In addition, he filed a petition asking that someone be appointed to represent his  brother’s interest in court.

The document lists the value of the estate as unknown, which is not uncommon in initial filings.

Prince estate value set at $156.4M years after his death

Prince died at the age of 57 of a fentanyl overdose in April 2016. The artist died intestate, without a will. Prince's heirs consisted of six siblings, two of which have died since Prince's passing, and two others are in their 80s.

Prince's estate will be administered evenly between Primary Wave, a New York music company, and the three oldest of the music icon's six heirs or their families. If the parties agree, estate administration could begin as early as February.

Article: Emerging Trends in the Law of Succession in Kenya

Marion Shamallah recently published an article entitled, Emerging Trends in the Law of Succession in Kenya, Wills, Trusts, & Estates Law ejournal (2021). Provided below is the abstract to the Article:

Family has been the basic unit of the society as espoused under article 45 of the constitution of Kenya. On the other hand the law of succession is greatly shaped by the laws governing family including marriage and children laws. As such with changes in the family structures and lass the law of succession has greatly shifted towards a positive direction to incorporate children born out of wedlock and cohabiting partners.

The Florida Probate Law Group  has recently made available some useful materials regarding Florida probate law:

Chart to determine intestate heirs, and

A guide to Florida probate.

Article: Intestate Succession in Ghana before and after PNDCL 111, 1985

Joshua Kweku Aba recently published an article entitled, Intestate Succession in Ghana before and after PNDCL 111, 1985, Wills, Trusts, & Estates Law ejournal (2021). Provided below is the abstract to the Article.

The study investigated intestate succession in Ghana before and after PNDCL 111, 1985. To satisfy the objectives of the research, qualitative research was held. The main objective is to find out if PNDC Law 111 fully promotes women’s property inheritance rights by relating it to international human rights protocols. The research is important because it highlights some of the weaknesses of law 111 on women’s rights of intestate property inheritance; and calls for necessary amendment or law reform. The Intestate Succession Act, 1985, (PNDC Law 111) was introduced in Ghana to curb the injustices, which the traditional customary practices mated of spouses after a man dies intestate. Before the coming into force of the Act people who died intestate had their self-acquired properties shared according to their family lineage. These customary practices normally rendered the children and the spouse of the deceased man with nothing and hence the introduction of the Law. The Law only becomes applicable when a man dies intestate. Upon all the significant successes the Law has chalked over the years, the Intestate Succession Act could not precisely address the veracity of polygamy. Where a deceased man in his lifetime had multiple wives, the courts interpret the succession law as granting the household chattels and one house to all of the deceased’s wives and children as tenants-in-common. If the woman was not lawfully or customarily married that woman may not be protected as the Law did not give any significant definition to who a spouse is as it does not include cohabitation. This is an area that the Parliament of Ghana needs to look at.