The ABA Section of Real Property, Trust & Estate Law is sponsoring a 90-minute teleconference on November 16 entitled Using Formula Clauses for Sales and Gifts. The program information is below:

Transferring business interests and other difficult-to-value assets can be fraught with peril for taxpayers and their advisors. The IRS can assert a large gift where none was intended or where a smaller gift was intended. GRATs avoid these issues, but they are not always the most appropriate vehicle. Using a defined value formula clause can mitigate risks when a GRAT does not satisfy the client's objectives. Although the IRS rarely questions formula clauses in testamentary estate plans, it has challenged them for gifts and sales.

Our panelists will discuss:

Learn the benefits of including a charity - and the process this entails - on March 1, 2011, when one of our panelists walks through the process with charities who have experience receiving such gifts.

If Congress changes the estate tax from the exemption amount and rate that it’s set to return to in 2011, the extra billions would have to come from other modifications of the estate and gift tax as a practical political matter. One way Congress might do this is by placing restrictions on GRATs. Another way Congress may choose to do this is through a prepaid estate tax.

Senate Finance Committee member Maria Cantwell proposed a prepaid estate tax. Under this plan, taxpayers could prepay estate taxes on the assets in an “estate tax prepayment trust” at a discount. Essentially, taxpayers could freeze their estates for purposes of the federal estate tax. This idea is receiving serious attention largely because it could raise billions of dollars “over the next 10 years—Congress’ (shortsighted) budget time frame.” However, the possibility of people like Mark Zuckerberg avoiding the estate tax may make this proposal a tough sell to Democrats.

This Article introduces (or reacquaints, as the case may be) estate planners to the basic theory of the step transaction doctrine and its development and application in estate planning techniques. This Article will also examine recent case law to identify methods that estate planners can use to avoid stepping on the issue with the Service, particularly regarding the use of LLCs as wealth transfer vehicles.

Although potential heirs may think they’d be better off if their rich grandfather died at the end of 2010 rather than the beginning of 2011, that may not be the case due to the carry-over basis. George Steinbrenner’s estate will probably pass to heirs tax-free this year, but his heirs may end up owing millions in capital gains taxes when they sell the assets. Nobody is concerned about the Steinbrenner heirs, but it’s the taxpayers who inherit small businesses that will be hit the hardest by the carry-over basis of 2010. Here’s an example of how the carry-over basis affects small business owners:

"Say Uncle Harry built his business with sweat equity. His company was worth $3 million when he died, but its tax basis was zero. Jack inherits the firm and sells it right away. If Harry died in 2009, there would be no tax (since Harry’s estate was worth less than $3.5 million it owed no estate tax, and thanks to stepped-up basis Jack owed no capital gains tax). But under 2010 rules, Jack would owe $255,000 ($3 million less the $1.3 million in allowed step-up leaves $1.7 million in gains taxed at 15 percent)."

Paul, an octopus at the Sea Life aquarium in Germany, correctly predicted the winner of all seven games of the World Cup. He made his predictions by opening one of two clear plastic boxes, each bearing a team flag and containing a mussel. His predictions attracted worldwide attention, and he was subsequently paid to support England’s 2018 World Cup bid. Paul also received hundreds of requests to go to Spain, but his agent turned them all down.

Paul died in his tank Tuesday morning of natural causes at the octopus old age of 2 ½ years. The aquarium hasn’t decided how to commemorate Paul yet, but they may give him a burial plot and modest shrine on the aquarium grounds. “Paul’s name will live on the Greek island of Zakynthos, where a permanent sea turtle rescue center funded in part by donations generated by the famous octopus is being established.”

Special thanks to Adam J. Hirsch (William and Catherine VanDercreek Professor of Law, Florida State University College of Law) for bringing this to my attention.

The National Business Institute is sponsoring a 90-minute national teleconference entitled Elder Law: What to do When a Spouse is Confronting Health Issues on December 1, 2010. The program description is below:

Dealing with incapacity and end of life decisions is never an easy task. This focused legal briefing will give you the skills you'll need to help your clients maintain control when they most need you. Make certain the spouse's loss of capacity will not send your client's life crashing down. Register today!

You can’t leave money or property to minors outright, so giving gifts to young children takes preparation and thought. Here are some tips:

Historically, laws relating to durable powers of attorney were based primarily on the common law of agency, but because of the increased use of durable powers of attorney and the resulting litigation, states have begun to enact detailed statutes. In this Article, the Authors give an overview of the Uniform Power of Attorney Act and examine the Act’s individual sections. The Authors recommend several revisions to the Act and encourage states to adopt the Act to bring uniformity to this area of the law.

Douglas K. Cook (attorney, Phoenix, AZ) recently created an animation of the various estate tax rates and effective exemptions from 2001 to 2011. The animation is below: 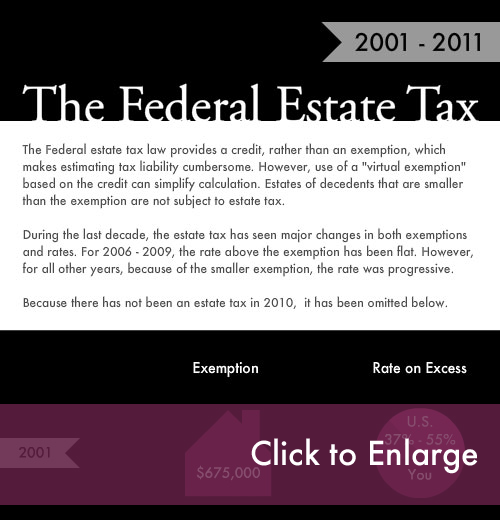 Special thanks to Douglas K. Cook for allowing me to display this animation.