Wills and Trusts in the Antebellum South

Stephen Duane Davis, II and Alfred L. Brophy (professor of law, University of North Carolina) have recently posted on SSRN their paper entitled The Most Esteemed Act of My Life: Family, Property, Will, and Trust in the Antebellum South.  The paper is based on wills filed in Greene County, Alabama, between 1813 and 1845.  The following is the abstract of the article:

This paper combines an empirical study of probate in Greene County, Alabama, one of the wealthiest counties in the United States in the years leading into Civil War, with a qualitative examination of property doctrine and ideology at that time. The data address three key themes in recent trusts and estates literature. First, what testators did with their extraordinary wealth; in particular, how they worked to maintain property within their families, and especially how male testators were suspicious of loss of their family's wealth through their daughters' marriages. Second, the testators used sophisticated trust mechanisms for both managing property and keeping it within their families. In the antebellum era, Americans celebrated the ways they harnessed technologies, from the steam engine to the telegraph and printing press, to create wealth and improve society. This study reveals that trusts should be added to that list of technologies that assisted in the creation and management of wealth. Finally, the data reveal the salience of enslaved human property, often managed through trusts after their owners died and also frequently divided between family members, to the maintenance of family wealth.

While some in the United States at the time, including some jurists, as well as politicians and novelists, questioned the desirability to our country of inheritance, the Greene County data show an extraordinary devotion to maintenance of family wealth. The findings in 'The Most Esteemed Act of My Life' invite further study in other places in the South, as well as in the North, to test the extent to which the existence of wealth (particularly a wealth based on human property) led to different patterns of bequest from those seen among some of our nation's wealthiest individuals at critical period of American history.

For a discussion of the article by one of the co-authors, click here.

Home Funerals On the Rise

Home funerals are increasingly popular with those who desire an informal, intimate, and organic end-of-life memorial.  Here are some things to consider when planning a home funeral:

One coffin maker who specializes in coffins for home funerals says his coffins can be used as a bookcase or coffee table until needed.  One consumer of these multi-functional coffins said that hers "once stood in her bedroom, but her husband, Rudolph, made her move it to a guest room because he pictured her in the coffin every time he laid eyes on it."  Katie Zezima, Home Burials Offer an Intimate Alternative, NY Times, July 20, 2009.

Jackson's Mother Not Contesting Jackson's Will - Yet

Lawyers for Michael Jackson's mother have denied that she is or will be contesting Jackson's will.  One lawyer offered the following comment regarding recent legal action taken on her behalf, which I previously blogged about:

In order to preserve her legal options, an application was filed this past Friday with the court to confirm that any possible objections Mrs. Jackson might raise at a later time regarding the appointment of executors would not constitute a challenge to the will itself. It is only fair and she has such a right under the law.

To those who are tired of the traditional marble headstone blandly reciting the name and lifespan of the those interred, consider the following more creative options for your estate plan.

For the slightly disgruntled: 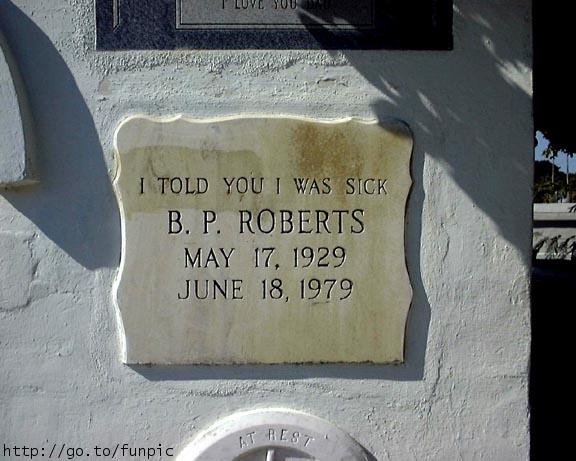 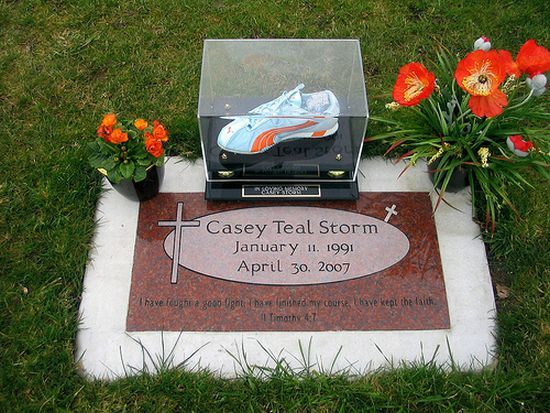 For the proud electrician: 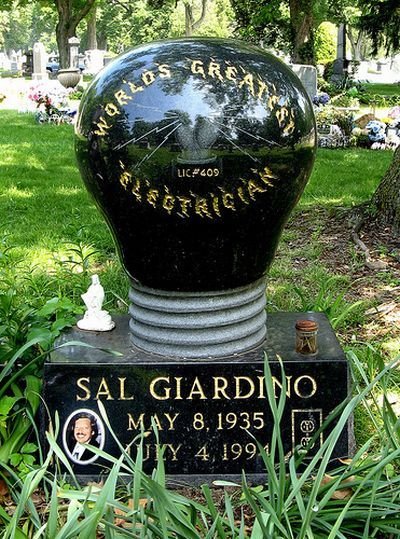 For those with a lot of stuff: 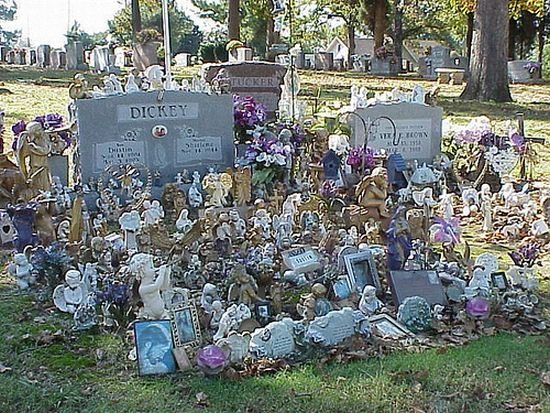 I have previously written on digital estate planning here and here.

A recent article on this issue points out that without knowing the usernames and passwords of a deceased or incapacitated person's online accounts, loved ones must get court authority to these accounts and then work with companies that are not quick to honor such authorizations.

Special thanks to Patrick S. Sylvester (Attorney & Counselor at Law, Sylvester Law Firm, PC) for bringing this article to my attention.

An employee of Foxconn International, an Apple product manufacturer, jumped from a 12 story building to his death after one of 16prototype I-phones disappeared under his watch at the Taiwanese company's Shenzhen factory.  His death came three days after the company launched an investigation into the missing phone.  Friends of the employee say that he was beaten, placed in solitary confinement, and his home was searched during the investigation.

Although the employee's estate plans have not been mentioned, any such documents may prove helpful in determining the true cause of his tragic actions.

The following is an excerpt from the introduction to the article:

Therefore, this Article proposes a new model of analyzing legal issues arising from the evolving notions of parentage in America and uses it to develop rules to govern the definition of parentage for succession law purposes while preserving testamentary freedom. To bring estates law back into step with modern family realities, this Article posits that an unadulterated functionally based approach should replace both the sanguinary nexus analytical framework and the recently adopted 2008 UPC Amendments approach. This unadulterated functionally based approach would be the only framework to determine a parent-child relationship--there would be no need for multiple frameworks--one for children born from sexual conception, one for children born of technological conception, and one for adopted children. Because succession laws look to familial relations only as an approximation of testamentary intent, the proposed framework in this Article focuses on the rights and best interests of the decedent only; in so doing, it often departs from analysis in other parent-child influenced case law where the focus--appropriately enough for other areas of family law, but not for estates law's approximation of testamentary intent-- has primarily been on the rights and best interests of the child.
To accomplish this goal, this Article uses parental support cases as a springboard for criticism of the current approach. As mentioned earlier, in cases where a family court deems a parent to have support obligations, the relationship between the obligated parent and child will also be deemed to qualify the child under the sanguinary nexus test for inheritance rights if the obligated parent died intestate. Surveying a variety of parental support cases involving novel family situations, this Article deploys a normative and pragmatic critique of estates law's reliance upon family law principles to determine relevant family relationships. From a normative standpoint, a close examination of parental support cases reveals how reliance upon family law principles undermines the integrity of testamentary freedom. Paradoxically, that potential attack on testamentary freedom has rather serious deleterious implications for effective family planning in modern society. From a pragmatic standpoint, the work demonstrates the growing impracticability of attending adequately to inheritance rights that arise from continued reliance on family law principles. This Article then articulates and defends an unadulterated functional approach to defining a parent-child relationship that would completely break genetic links (and legal parental determinations) for inheritance purposes. This Article concludes that paying greater fidelity to a wholly functionally based framework, rather than reliance upon blood relationships or family law jurisprudence, would help rehabilitate the core value of testamentary freedom in estates law.
To describe fully the unadulterated functionally based approach to defining the parent-child relationship for inheritance purposes, this Article will address the philosophical foundations of estates law and family law, as well as the doctrinal developments in each that have given rise to the current conflict. Accordingly, Part II, “Foundation Underpinnings of Pertinent Legal Disciplines,” introduces the doctrine of testamentary freedom for estates law purposes and explores the jurisprudence of family law in general. Part III, “Current State of Relevant Property Succession Law,” examines the various succession laws impacted by the debate concerning the definition of a parent-child relationship. Part IV, “Parent Making: The Processes and Problems,” describes the various technological advances in child creation and genetic testing that are influencing the notion of family structures, while highlighting the inadequacies of the sanguinary nexus test. Part V, “Case Analyses,” uses parental support cases for evaluating the desirability of family law's potential influence on inheritance law. Part VI, “Defining the Parent-Child Status,” reviews various frameworks for defining the parent-child relationship, including the 2008 UPC Amendments, and proposes and explores the unadulterated functionally based approach as the sole framework to solve the various issues arising for the changing structures of the American family. Part VII, “Potential Criticisms of Unadulterated Functionally Based Approach,” evaluates the potential shortfalls of the unadulterated functionally based approach to defining the parent-child relationship for inheritance purposes. Finally, Part VIII reiterates the need to amend succession law to encapsulate more fully the evolving notion of parent-child relationships and advocates the adoption of the unadulterated functionally based approach to alleviate the concerns raised by the current reliance of the sanguinary nexus test.

The following is a summary of the book:

This book takes a very practical approach to the question that should be asked by every trustee, especially non-professional trustees: How do I fulfill my fiduciary duties to the trust beneficiaries (and thereby avoid liability for failure to do so) in determining how to invest the trust assets?The book begins with an in-depth introduction to investment basics, examines such issues as the law of diversification and the prudent investor act standard, explores how to determine breach and damages, and explains the effects of principal and income acts on investing. It concludes by addressing the drafting of an investment plan by the trustee, a key topic because under the UPIA a fiduciary is judged not on his or her actual investment performance, but rather on the appropriateness of the investment plan. This chapter provides practical guidelines for newly-appointed trustees on how to develop such a plan, including specific comments directed to life insurance trusts, where a life insurance policy is usually the primary investment. Appendices offer sample trust investment language and an investment plan flow chart.

The following is an excerpt from the introduction to the article:

Several financial firms have inquired about purchasing the Jackson estate's 50% share of Sony/ATV Music Publishing.  John Branca and John McClain, the named executors of the estate who are awaiting court confirmation of their appointments, have said that the estate's stake in Sony/ATV is not for sale.