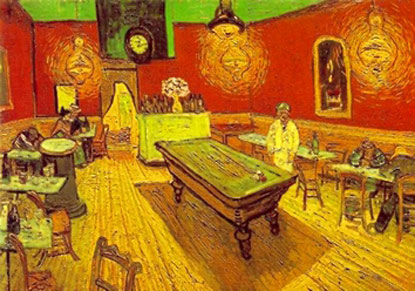 Now, a descendant (Pierre Konowaloff) of the original owner (Ivan Morozov) claims that the property was improperly taken from Ivan by the Russian government during the Communist revolution.

The university says Mr Konowaloff has claimed ownership and has said he wants title transferred to the Russian state and to receive compensation. Mr Konowaloff claims the Soviet nationalisation of property was illegal, so title never passed from his great-grandfather, according to Yale.

Listed below are links to weblogs that reference Yale fights to keep Night Cafe:

I recently came across your blog and have been reading along. I thought I would leave my first comment. I don't know what to say except that I have enjoyed reading. Nice blog. I will keep visiting this blog very often.