Charles Silver, David Hyman, and Bernard Black have posted to SSRN Fictions and Facts:  Medical Malpractice Litigation, Physician Supply, and Health Care Spending in Texas Before and After HB 4.  The abstract provides:

This article, written for a symposium issue of the Texas Tech Law Review, summarizes our research on the impact of Texas’ 2003 medical malpractice (“med mal”) reform. Our central findings include:

(1) there were no major changes in the frequency of med mal claims, payout per claim, total payouts, defense costs, or jury verdicts that can explain the spike in premiums for med mal liability insurance that occurred in Texas in the years before the 2003 reforms;

(2) Texas’ supply of direct patient care physicians grew steadily, at similar rates, in both the pre- and post-reform periods, despite politician’s claims that physicians fled Texas before reform and flocked back thereafter;

(3) although the damage caps adopted in Texas and other states greatly reduced the volume of malpractice litigation and payouts to patients, neither in Texas nor in other states have damage caps moderated the growth of health care spending;

(4) the savings in liability costs generated by the Texas reforms were shared between physicians and their insurers, with the former paying lower premiums and the latter collecting more premium dollars relative to dollars paid out on claims; and

(5) there is evidence that when liability rules are relaxed, hospital safety records gradually deteriorate.

The European Centre of Tort and Insurance Law and the Institute for European Tort Law of the Austrian Academy of Sciences and the University of Graz will host the 18th Annual Conference on European Tort Law from April 25th through April 27th in Vienna, Austria.

The Annual Conference provides a unique opportunity for both practitioners and academics to discover the most significant tort law developments from across Europe. A Special Session on Saturday morning is dedicated to the increasingly relevant topic of ‘Human Rights Violations in Global Supply Chains’.

Simons on the Tort/Crime Distinction

This essay provides an overview of the crime/tort distinction. It first investigates some of the fundamental differences between criminal law and tort law in doctrine and legal structure. It then explores some important similarities and differences in normative perspectives between the two doctrinal fields. This typology should prove analytically useful for examining some of the specific issues at the borderline of crime and torts — such as the proper scope of punitive damage liability and the question whether criminal law as well as tort law should vary legal sanctions simply because of the fortuitous occurrence of harm.

This is a piece he wrote for a symposium here at Widener. 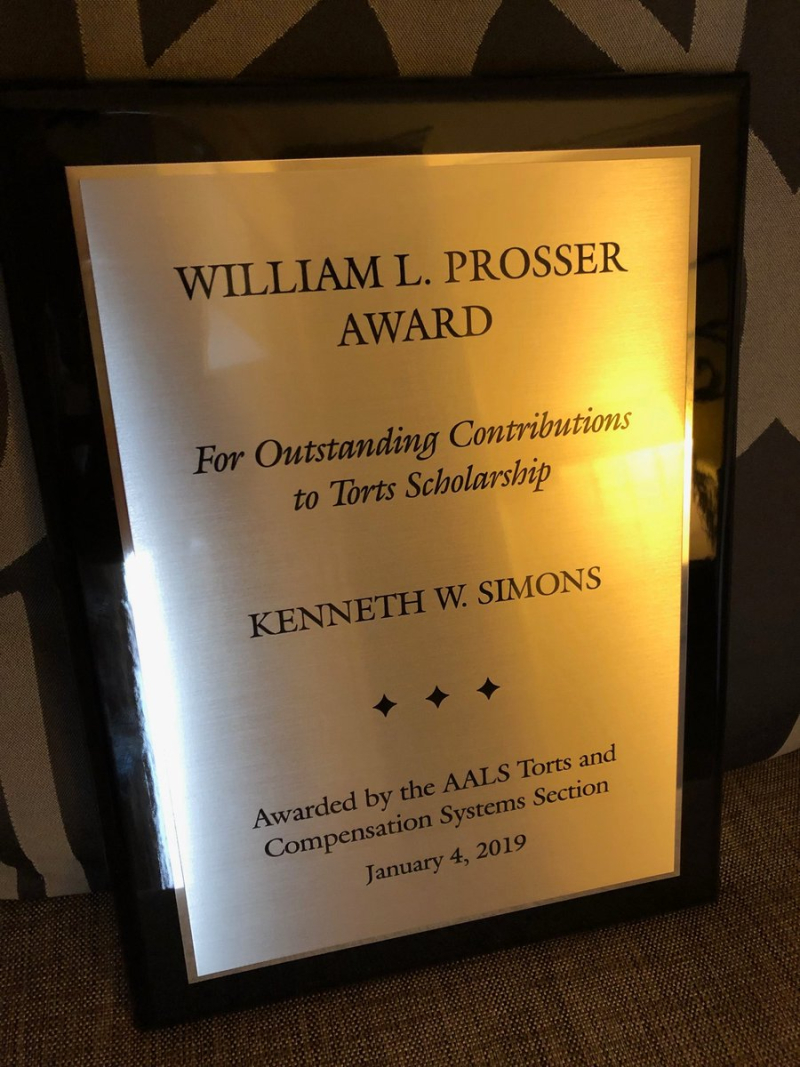 In addition to the traditional Torts Section's panel, there is a Jurisprudence panel entitled "Recognizing Wrongs:  Philosophy of Tort Law":

Torts at the AALS Annual Meeting

Stacey Tovino is concluding her term as Chair of the Torts and Compensation Systems Section.  The program is as follows:

Oxford University Press is pleased to announce the launch of Oxford Studies in Private Law Theory, edited by Paul Miller (Notre Dame) and John Oberdiek (Rutgers), and to issue a call for papers for the first volume.

Oxford Studies in Private Law Theory is a series of biennial volumes showcasing the best article-length work across private law theory.  The series will publish exceptional work exploring the full range of private law’s domains and doctrines—including contract, property, tort, and fiduciary law as well as equity, unjust enrichment, and remedies—and employing diverse methodological approaches to individual areas of private law as well as to private law in general.  Submissions should be approximately 12,000 words, inclusive of footnotes.  The deadline for submission is May 6th, 2019.

All accepted papers will be presented at a workshop at Notre Dame’s Global Gateway campus in London in late summer/early fall 2019.  The Notre Dame Program in Private Law will cover the expense of contributors’ travel and accommodation.

·         “Rights and Retrenchment in the Trump Era” by U. Penn. Prof. Stephen Burbank and UC Berkeley Prof. Sean Farhang

·         “What We Don’t Know About Class Actions but Hope to Know Soon” by U. Penn. Prof. Jonah Gelbach and Stanford Prof. Deborah Hensler

Chamallas Asks "Will Tort Law Have its #MeToo Moment?"

Martha Chamallas has posted to SSRN Will Tort Law Have its #MeToo Moment?.  Presented at AALS in January and forthcoming in the Journal of Tort Law, the abstract provides:

Using tort law’s treatment of claims for domestic violence and sexual assault as examples, this essay identifies prominent features of a feminist historical approach to law to demonstrate how gender inequality is reproduced over time, despite changes in legal doctrine. When informed by feminist theory, history can function as a critique of past and present regimes of inequality, highlighting the various techniques of exclusion and marginalization that emerge to prevent law from redressing serious, recurring injuries suffered disproportionately by women. The essay explores two such techniques: sexual exceptionalism that treats gender-related torts differently than other harms and the adoption of ostensibly neutral rules that have a disparate impact on women and marginalized groups. The essay speculates as to whether the #MeToo movement can provide the momentum to produce a break from the past, particularly with respect to third-party claims holding employers and other institutional defendants responsible for sexualized harms.

Ben Zipursky has posted to SSRN his Monsanto Lecture Online Defamation, Legal Concepts, and the Good Samaritan.  The abstract provides:

Federal and state courts around the country – aided by academics on almost all sides – have completely misread the Communications Decency Act [“CDA”] § 230(c). This widely cited provision was designed to protect Internet service providers and certain Internet users from liability for the defamatory statements posted by others online. Congress did not want these actors to face a defamation-law equivalent of a duty to rescue strangers -- an affirmative duty to remove third parties’ defamatory statements about others. And it certainly did not want a service provider’s efforts to protect a stranger’s reputation to backfire by suddenly creating liability for everything the service provider failed to remove. So, like every state legislature has done for off-duty medical personnel who act as good Samaritans, Congress in 1996 created a law saying that good faith efforts to filter offensive or defamatory material do not create an affirmative duty to remove such material and do not open them up to liability. For good measure, the statute also laid down a basic rule that there is no liability simply for being the conduit of what others have posted or for failing to remove such postings from one’s own site, and it preempts any state law that does otherwise. The CDA thus ensures that states’ defamation law runs roughly parallel to duty-to-rescue doctrine in the common law of negligence as amended by good Samaritan statutes. Indeed, that is why “Good Samaritan” is in the title of CDA § 230(c).

Under the sway of a talented First Amendment bar and in an academic culture hostile to common law concepts, judges around the country have selected an entirely different and misguided interpretation of § 230(c). They read the statute as, in effect, an abrogation of libel law’s classic republication rule, which states that a person who republishes a defamatory statement is liable as if she were the one who first said it. According to the overwhelmingly dominant interpretation of courts today, once someone says something defamatory, anyone who reposts it enjoys complete immunity from all state and federal law, even if the republisher knows the statement to be false and defamatory. Those academics who have rejected this interpretation tend to swing to the other extreme, advocating that website owners who have notice of a defamatory posting should be liable for failure to remove it. This too misses the point of the statute’s text. Through a detailed examination of libel doctrine and a close analysis of the case (Stratton Oakmont v. Prodigy) that generated the development of a protective federal statute, the article displays the correct reading of the statute and the importance of retaining a robust version of the republication rule online.

In the first year of the Trump presidency, several litigation reform bills passed the House of Representatives. The fate of these bills remains uncertain, but the set of issues they raise will not disappear anytime soon. Legal reform advocates see an opportune moment to pursue an aggressive reform agenda, while critics view the bills as threats to civil justice. In addition, the Trump administration has been at the center of a swirl of litigation, raising issues about the role and processes of civil justice. This one-day symposium will address the prospects of civil litigation reform in the Trump era, taking seriously both the threat to the justice system and the opportunities for improving the litigation process.

In case you could not join is in San Diego earlier this month, the podcast from the Torts Section's meeting is here:

I hope to see many of you tomorrow at the Torts and Compensation Systems Section's program at the Annual Meeting.  The program is Friday, January 5 from 1:30-3:15.  We will do three things:

2.  Panel presentations on "The Role of History in Tort Theory":  Speakers are Martha Chamallas, Don Gifford, John Goldberg, and Ted White.  Unfortunately, John Witt is not able to speak.  The panel will take questions from the audience.

Sugarman on Torts and Guns

Steve Sugarman has posted to SSRN Torts and Guns.  This piece is an expansion of his remarks at last year's AALS Torts Section panel and will appear in volume 10:1 of the Journal of Tort Law.  The abstract provides:

When Hillary Clinton and Bernie Sanders squabbled during their 2015-16 election campaigns over the federal Protection of Lawful Commerce in Arms Act (PLCCA), they were talking past each other, misleading their listeners, and failing to understand what this statute pre-empting some state tort claims against the gun industry was actually about. Many critics of PLCCA argue that gun makers and sellers should be liable just like those in the auto, pharmaceutical drug, and tobacco industries. Yet, it is very rare for defendants in those industries to be successfully sued in tort for the sort of conduct that gun control advocates would like to hold the gun industry liable. In contrast to the hopes and fears of Clinton and Sanders, repealing PLCCA would not likely result in a burst of successful lawsuits, although some might be winners. Perhaps potential and actual tort litigation against this industry is better understood as part of a longer term battle over public opinion and eventual legislative reform.

AALS Torts Panel: The Role of History in Tort Theory

The Role of History in Tort Theory

Claims about the nature of tort law are often coupled with historical claims.  Thus, many mid-twentieth century proponents of an expansive, compensation-oriented tort law argued strict liability was prevalent under the common law writ system.  What is the purpose of such appeals to history?  Are they necessary to tort theory, or merely tangential?  Does the importance of history depend on whether the theory is descriptive or normative?  A panel of experts takes up these issues and wrestles with the role of history in theorizing about tort law.

The 2018 Prosser Award will be presented to Marshall S. Shapo, Northwestern University Pritzker School of Law .