As I mentioned yesterday, kudos to the students of the Federal Courts Law Review here at the Charleston School of Law for the Mass Torts in the Federal Courts symposium last week. In addition to the keynote address by Ken Feinberg and remarks by Judge Corodemus, the day included three lively panel presentations. 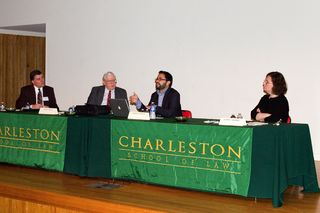 Panel One focused on Preemption. Moderated by my colleague, Bill Janssen, the panel featured (left to right) Jim Beck (Drug & Device Blog/Dechert), Deepak Gupta (Senior Counsel, Consumer Financial Protection Bureau), and Cathy Sharkey (NYU). Beck focused on the presumption against preemption and pointed out the Supreme Court's inconsistency on the doctrine. Beck termed the presumption a "judicial football," and noted that Justice Kennedy holds the "key vote" on the issue. Gupta provided a consumer protection viewpoint, and noted that agencies rely on the tort system to supplement and inform the agency's work. Sharkey pointed out the "absurdity" of the Court's rulings in Wyeth v. Levine and Pliva v. Mensing: If you take the generic version of a drug, preemption applies, but if you take the brand name version of the same drug, preemption does not apply. Sharkey advocated a new framework for the Court to view the preemption question focusing on agency consideration: whether the governing agency has paid particular attention to the risk of the plaintiff's injury should control the premption question. I moderated Panel Two on "Aggregation and Mass Torts." Sheila Birnbaum is speaking in the photo, while seated left to right are myself, Timothy Eble, Alexandra Lahav (Connecticut) and Linda Mullenix (Texas). Eble and Lahav focused on the current litigation system, while Mullenix and Birnbaum addressed the fund approach. Eble focused on settlement class actions and presented a case study involving a medical monitoring settlement class action. He argued that the settlement class is an appropriate use of Rule 23. Lahav discussed the tension between individualism and efficiency in the debate over how to adjudicate mass torts, and asserted that a third value was missing from this discussion: equality. Responding to Ken Feinberg, Mullenix argued that the fund approach is not "sui generis," but increasingly the chosen method for resolving mass torts. Her presentation focused on the voluntariness of a plaintiff's election of remedies under a fund system, and suggested three solutions to combat what she argued was uninformed consent. Her solutions included provision of pro bono counsel to fund claimants, bar association counseling of fund claimants, and judicial invalidation of fund award's based on lack of informed consent. Birnbaum agreed that we are "going to have lots and lots of funds." In response to Mullenix, Birnbaum pointed out that most of the 9/11 claimants had counsel and discussed her work with the 9/11 litigants as well as with the new 9/11 Fund claimants. Birnbaum asserted that the fund approach can provide "more justice" than litigation and criticized the expense and delay involved in the tort system. 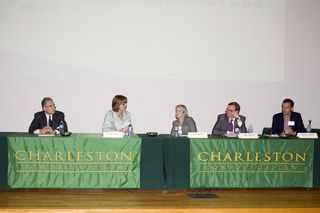 The final panel considered Ethical Issues Surrounding Fees and Settlements in Mass Torts. Nathan Crystal (Charleston) moderated the panel, with presentations by (left to right) Lynn Baker (Texas), Beth Burke (Richardson Patrick), John Beisner (Skadden), and Morris Ratner (Visting, Harvard/Professor-Elect, UC Hastings). Burke discussed aggregate settlements under Model Rule of Professional Responsibility 1.8, and the use of a point-based allocation system as opposed to a dollar-based system. Ratner addressed a new phenomena - trial courts relying on the ethical rules to impose caps on attorneys' fees in non-class settlements. He argued that the ethics rules do not provide the right guidance to fill this procedural gap, and further that incorporating the ethical rules in this fashion imposed a cost on the system. Beisner proposed that the ethics rules should be strengthened to better address conflicts of interest at the outset of mass tort litigation. In response to Ratner, Beisner suggested that courts felt a need to do something about fees that were perceived to be too high. Finally, Baker also considered the trend of judges imposing caps on fees in non-class actions, and asked whether the plaintiffs' attorney ethically may challenge the cap where the court sua sponte has now created a conflict of interest between the attorney and her client.

My thanks to all the participants for a wonderful conference.

Listed below are links to weblogs that reference Mass Torts in the Federal Courts - Recap Part II: