Please Do Not Place the Sharp Pointy Thing In Your Eye Socket, Thanks

Speaking of potential overwarning at amusement parks (well, Ted was, anyway), I snapped this shot at the wonderful Holiday World amusement park in Santa Claus, Indiana. This is outside the Voyage roller coaster (which, I proudly note, my nine-year-old daughter rode very bravely). 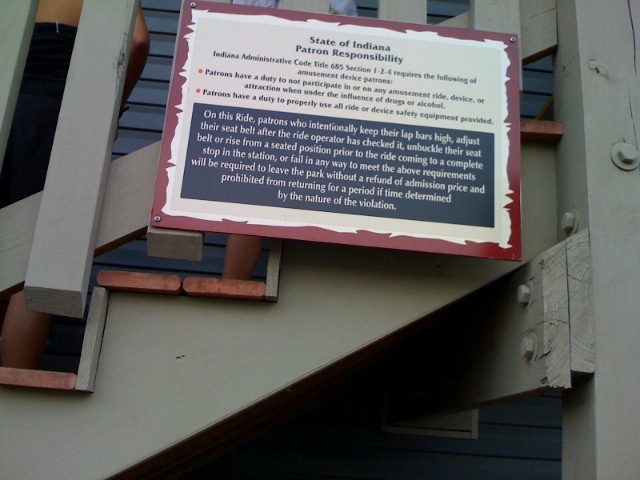 Some background: several years ago, a young woman died at Holiday World after evidently doing exactly what is described in that warning sign -- it appeared that she intentionally evaded the restraints in order to get more "air time." Her family sued; after a number of procedural matters went poorly for the plaintiffs (mostly choice of law issues that ensured that comparative fault would be considered even in the strict liability case, and that excluded punitive damages), the case settled for an undisclosed amount. You can read a lot more about it here.

And, incidentally, they do also have a number of much more general warning signs.

Listed below are links to weblogs that reference Please Do Not Place the Sharp Pointy Thing In Your Eye Socket, Thanks:

[WGC notes: Yeah, I pointed that out to the park's PR director when I saw it.]

OT, but the Voyage is by far one of the best, if not THE best, coaster I've ever ridden. I was down there for HoliWood Nights earlier this year.

It's not inappropriate to want a cigarette after riding it.

No argument here. I'm proud to note that I was one of the Secret Nine involved in discussions about the design of the ride. This was the first time I'd been back since the construction tour; sure was fun to ride what we'd talked about...

Wow. Didn't know about any secret groups :). Mike Graham of the Gravity Group was there that Saturday, and it was cool to meet him. That underground triple-down is one of the best parts of the coaster.