Pharmalot broke the story of David Egilman settling his part of the document leak with Lilly to the tune of $100,000 (to be donated to charity).  The stipulation is available here: Download EgilmanSettlement.pdf, and his affidavit is here: Download EgilmanAffidavit.pdf.  (You will note that it indicates that it is page 1 of 80; I am not posting pages 2 through 80, as they are simply Judge Weinstein's order.)

The affidavit is short; in it, Egilman explicitly acknowledges that he released documents that would help the plaintiffs and that there was an alternative perspective he intentionally avoided providing: 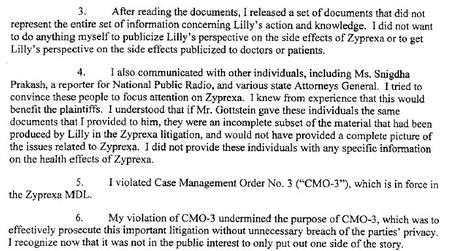 Given number 5, this comment from Egilman's attorney (to Pharmalot) is intriguing at least:

However, Egilman’s attorney, Alex Reinert says that Egilman didn’t admit to anything illegal.

Violation of a federal case management order is not necessarily criminal, and in that (narrow) sense, I suppose it's not the admission to "anything illegal," but he explicitly acknowledges violating a court order.

It appears that James Gottstein (the Alaska lawyer who subpoenaed the documents from Egilman and provided them to media) is still in the mix, though I'm still digging through the filings.

Updated again: I've now looked through the dockets of both the district and circuit courts and see nothing that indicates definitively that any of the other parties have settled.  That leaves not just Mr. Gottstein but many of the enjoined entities.

Yet another (minor) update: In case you're new to the site and want some background, I've done a number of posts about Zyprexa, most about the document dispute; they're here.  Also, I forgot to mention initially that I perform a small amount of consulting for pharmaceutical clients.  Lilly is not one of my clients (nor has it been in the past), but I am involved in litigation in which Egilman is or was an expert for plaintiffs.

And another one: Welcome, WSJ Health Blog readers.  If others haven't seen the post there, do so; it's a good one.  I'm hoping to get a bit more up about the case this weekend.

Listed below are links to weblogs that reference Updated: Egilman "Accepts Responsibility," Settles with Lilly for $100K:

» Zyprexa protective order enforcement VI: Egilman settlement from PointOfLaw Forum
Dr. Egilman "accepts responsibility" and agrees to pay Lilly $100 thousand. His statement recognizes that it "was not in the public interest to only put out one side of the story" in leaking selected documents to the New York Times.... [Read More]

This is shocking. Why would a Professor, who has possibly saved the lives of many by exposing the illegal actions of a drug company "guilty" of anything? I worked for the law firm, Lopez and Hodes, that sued Eli Lilly for negligence, recklessness and gross negligence, strict liability, breach of implied warranty, and long list more over their drug, Zyprexa. At least 26 people died from that drug and others suffered immensely.
It seems David Egilman, had a "duty to act", and should be applauded not punished
There were over 8,000 claims of damages and the settlement was for only $690 million in 2005. Not nearly enough for the damage they caused.

Please send info or web site, on the complaints re Zyprexa. My son is on ot and ai need to be aware