Quite a few people, knowing of my interest in amusement ride safety, have directed me to the coverage of the tragic accident at Six Flags Kentucky Kingdom, where a girl's feet were severed on the "Superman: Tower of Power" drop ride (formerly known as "Hellevator").  The park has removed the ride's page from their website; you can see a cached version at Archive.org.

The ride is an Intamin installation of a "Giant Drop" ride.  This is an image from a different installation: 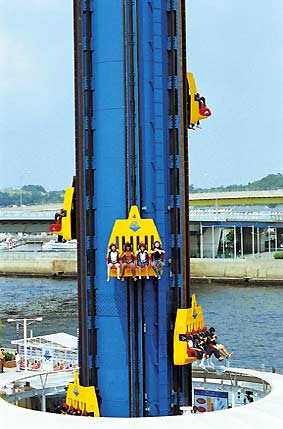 As I understand the ride, each ride carriage is lifted up on three steel cables.  (The cables may be attached to a "catch car" that holds the actual carriage, but I think this is one of the ones without the catch car.)  After being held at the top, the carriage is released, which falls under the force of gravity to the ground, where it is stopped by permanent magnets, making the ride very nearly foolproof -- i.e., so long as the earth's magnetic force doesn't suddenly change, the carriages will always stop.

But then there's whatever happened here.  It is fairly clear that at least one cable broke and either wrapped around the girl's legs or, because of the tension the cables are under, the broken cable flew through her legs.  The CNN story says the cable wrapped around her legs.

The other puzzling part is the consistent description of the cable breaking and the carriage falling immediately thereafter.  The obvious assumption is that the former caused the latter, but I think for that to happen, it would have to have been a catastrophic failure -- i.e., that all three cables broke at once.  My guess (and it's pure speculation) is that the cable braking coincided in time with the point at which the car would have been dropping anyway.

Intamin also manufactured Cedar Point's Top Thrill Dragster, a launched coaster.  The cable on that ride has broken periodically, including at least once when shards allegedly injured onlookers, who sued.  (Intamin is a very prolific ride manufacturer; my sense is that they have perhaps more than their proportional share of injuries on their rides, including a death at Six Flags New England's Superman: Ride of Steel, but it's hard to be sure.)

Update: No surprise, but at least one other park (Kings Island) has shut down its Intamin drop ride.  It's quite different, but the same manufacturer and same basic mechanics.

Listed below are links to weblogs that reference Accident at Six Flags Kentucky Kingdom:

» Young Girl Suffers Tragic Personal Injury at Six Flags Amusement Park in Kentucky from Personal Injury Law Update
As many of our readers must be aware, a 13-year old girl suffered a tragic personal injury on Thursday when her leg severed at the ankle while riding the Superman Tower of Power at Six Flags Kentucky Kingdom. The ride [Read More]

A: I believe all the Intamin drops, including the one at 6FKK have "catch cars"

B: The earth's magnetic field has nothing to do with the ability of magnetic braking to stop the descent. The physical laws of electricity and magnetism would have to cease working for the magnetic brakes to fail to operate.

C: The death at Six Flags New England's Superman: Ride of Steel was clearly due to operator error (restraints were released and not properly checked afterwards) -- read the official incident reports.

D: Regarding "The other puzzling part is the consistent description of the cable breaking and the carriage falling immediately thereafter." All such reports I have seen are based on the observation of one or two emotionally distraught individuals who clearly had little or no knowledge of the ride operation. The consistency is due to the reuse of the same reports by all news outlets.

E: Wait for the official incident report before deciding what happened.

(A) You may be right, but I've seen several descriptions, including those from People Who Know, suggesting otherwise. They may be confusing the Intamin rides with other drop rides.

(B) You're right, of course. I was sloppily trying to point out the fact that it couldn't fail. Thank you for the correction.

(C) I disagree and have read the report, the witness statements, and hundreds of pages of documents relating to it. The "official incident report" cites as "contributing factors" (a) the victim's girth (which prevented the restraint from working as designed - where I come from, that's a design defect and/or negligence in loading); (b) pre-existing medical condition; (c) varied seat belt sizes (again, design defect); (d) failure of ride attendant. It's not even clear from the report that the failure was failure to check the restraints rather than a failure to push them down far enough. The major restraint changes suggest (though not conclusively) that the park reached a similar conclusion about the restraints.

Can Six Flags prevent season ticket holders from demanding a refund because of this incident? I am from Louisville and do not intend to ever go back.

THis is the article about further information on her.
The witnesses and 911 calls say that the cable snapped and then the ride fell almost lifter her off the ride.

LOUISVILLE, Ky. (AP) -- A Louisville teenager has been released from a Tennessee hospital, three weeks after her feet were cut off in an amusement park accident.

Kaitlyn Lasitter, 13, was discharged Saturday from Monroe Carell Jr. Children's Hospital at Vanderbilt in Nashville, Tenn., the hospital said in a written statement on behalf of the girl's family.

"With her discharge from the hospital, Kaitlyn has completed only the first step in her long journey toward recovery," said Vanderbilt University Medical Center spokesman John Howser. "Kaitlyn and her parents are still facing many challenges ahead."

Doctors at the hospital reattached Lasitter's right foot, according to a family statement released earlier this month. Doctors were unable to save her left foot.

The statement did not say where Lasitter will undergo rehabilitation or if the family would return home to Louisville.

A message left for Larry Franklin, an attorney who represents the Lasitter family, was not immediately returned Saturday.

Carolyn McLean, a spokeswoman for Six Flags Kentucky Kingdom, said representatives of the park have tried to contact Lasitter's family several times while she was in the hospital and will renew those efforts now that she has been released.

"We hope to contact them soon," McLean said Saturday.

Lasitter was injured June 21, when a cable broke on the Superman Tower of Power ride at Six Flags Kentucky Kingdom. State investigators have been trying to determine what caused the cable to break. Investigators were taking written statements from witnesses, reviewing statements and analyzing physical evidence and photographs of the scene.

Lasitter's parents, Randall and Monique Lasitter, sued Six Flags Kentucky Kingdom in Jefferson County Circuit Court on Thursday and are asking a judge to order the park not to destroy the cable that investigators believe tore off the girl's feet.

The lawsuit claims the park failed to maintain the equipment and ensure riders' safety. Carolyn McLean, a spokeswoman for Kentucky Kingdom, said she had not reviewed the lawsuit and declined to comment Friday.

Ted Sloan, a spokesman for the Kentucky Department of Agriculture, which inspects amusement park rides, said the investigation into the accident is continuing.

The ride lifts passengers 177 feet straight up, then drops them nearly the same distance at speeds reaching 54 miles per hour. The accident caused Six Flags to shut down similar rides at parks in several states.

(Copyright 2007 by The Associated Press. All rights reserved

I was at Six Flags St. Louis yesterday and it's Tower of Power is closed citing "wet paint."

I'm looking at the picture of the Intamin ride BC posted, all those kid's feet dangling in the air, and I'm getting a little nauseous. If Intamin has more than its' fair share of accidents on their rides than they must be called on it. They must shut them down and correct the problem, though I'm not sure if a retro repair would be a good thing - maybe the entire machine should be chucked!

Some folks were claiming the park had put their own cables on the ride, instead of using the manufacturer's.

That's correct. Intamin states they have not supplied parts for this ride for 13 years...