Illinois state Rep. Kelly Cassidy hosted a panel discussion in Chicago at the end of August to discuss the intersection of LGBTQ and reproductive rights. Cassidy identified these rights as forming the basis of "her life's work" and asked the panelists how the two issues intersect with one another and are viewed by society.

The panelists agreed that these discussions--and making them LGBTQ-friendly--are especially integral for youth. "Destigmatizing sex education is vital for everyone's well being," said Uniejewski of NARAL.

Hunt explained that "everyone has multiple identities," and recognized that today's young people are better at breaking down barriers that have previously existed between separate movements. Intersectionality necessarily breeds conversations about the power dynamics among people, too, which should not be ignored in the quest to bring various movements in solidarity with each other.

The panel also discussed "crisis pregnancy centers" and how their work has been detrimental to the reproductive rights community, largely due to the false or incomplete information these centers offer. "Miller explained that one of the ways to remove these center's power is by overturning the Hyde Amendment." The Hyde Amendment is a provision, passed in 1976,  that bars the use of federal funds for abortion procedures unless the women's life is at risk or if the pregnancy was a result of incest or rape.

The panelists all agreed that halting Brett Kavanaugh's confirmation to the Supreme Court is of primary importance for activists today.

On February 27, 2018, the Center for Reproductive Rights, CUNY Law's Human Rights and Gender Justice Clinic, NYU Law, and others will host a symposium titled "American Poverty and Gender: Government Control and Neglect of Women Living in Poverty."

After an opening keynote from Dr. Khiara Bridges, author of The Poverty of Privacy Rights, a panel of experts will address issues ranging from reproductive justice and maternal health to criminalization and its impact on women.

The moderated discussion follows the December 2017 fact-finding mission to the United States by Professor Philip Alston, UN Special Rapporteur on extreme poverty and human rights. This forum aims to address the particular ways poverty affects women in the United States from an intersectional perspective considering gender, poverty, and race.

Michele Bratcher Goodwin at the University of Utah: The New Reproductive Battlefront 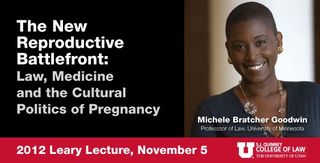 Women's reproduction dominates recent political platforms and debates. However, relatively little attention has focused on the criminal policing targeted at pregnant women across America. Since the late 1980s, state legislatures have enacted punitive feticide laws that ostensibly apply to a broad range of activities, including falling down steps, suffering drug addiction, refusing cesarean sections, and attempting suicide. Legislators and prosecutors from both political parties have decided that a very strong "stick" should be used against pregnant women. Indeed, despite the fact that early feticide laws were intended to protect women from third party harms to their pregnancies, such as domestic violence, because women are more likely to be the targets of domestic violence during their pregnancies, now fetal protection laws—in 38 states—lead to unreasonable arrests and senseless convictions of pregnant women. The scope of the problem is difficult to measure. Yet, what is clear from the legal cases and news reports is that most of the victims are poor and many are women of color. In this year’s Leary Lecture, Professor Goodwin examines the expanded use of criminal laws and civil commitments to shape new reproductive health norms. Watch Live Online >>.

Nov. 2, 2010: London Conference on the Rise of Reproductive Technologies

This event is part of a series of 3 public events on 'Gender and the Bio-medical Sciences' which will bring world class experts together to engage directly with the public on topics of gender and radical bio-medical advances of the 21st Century. What can the latest scientific advances tell us about gender; what will be possible in the future and why does it matter? (Please see the attached poster for details.)

Organised by the University of Cambridge Centre for Gender Studies in association with the Guardian and kindly supported by Cambridge University Press.

For details of all 3 events, please visit: http://www.gender.cam.ac.uk/events/guardianforum/

The Feminism and Legal Theory Project of Emory University School of Law has issued a call for papers for a workshop, "Feminism, Law, and Masculinity," to take place Sept 11-12 2009:

This workshop will explore the relevance of masculinities studies to feminist legal theory and activism. We have long struggled, both within and without the academy, to understand how law defines the feminine by articulating, constructing, and regulating women and the female body. Similarly, and more broadly, feminisms have focused on the place of gender in the construction of social relations that too often fail to protect the interests of women. This work notwithstanding, the place of masculinity has received relatively little attention. We hope to facilitate social and cultural resistance to assertions of hyper-masculinity, particularly those that arise in response to feminism itself.

We will interrogate the privileged positioning of the male body that results from its being cast as normative. We also invite papers which engage feminist ethics or approaches to address the relevance of masculinity to feminist legal theory. We particularly welcome submissions locating masculinity within those areas of study feminism has identified as key: violence, reproduction, state responsibility, poverty, and rights....

Please email a paper proposal of several paragraphs length by March 30, 2009 to:
mfineman@law.emory.edu and m.o.thomson@law.keele.ac.uk

What IS Sexual Freedom? And, more importantly, why should I care about it?

Register NOW and join a group of nationally renowned speakers and local organizers - experienced sexual freedom activists and trainers - and learn how to create social and political change.

This fabulous forum offers a full day of discussions and skill-building/problem-solving sessions featuring some of the best known leaders in the social change movement.