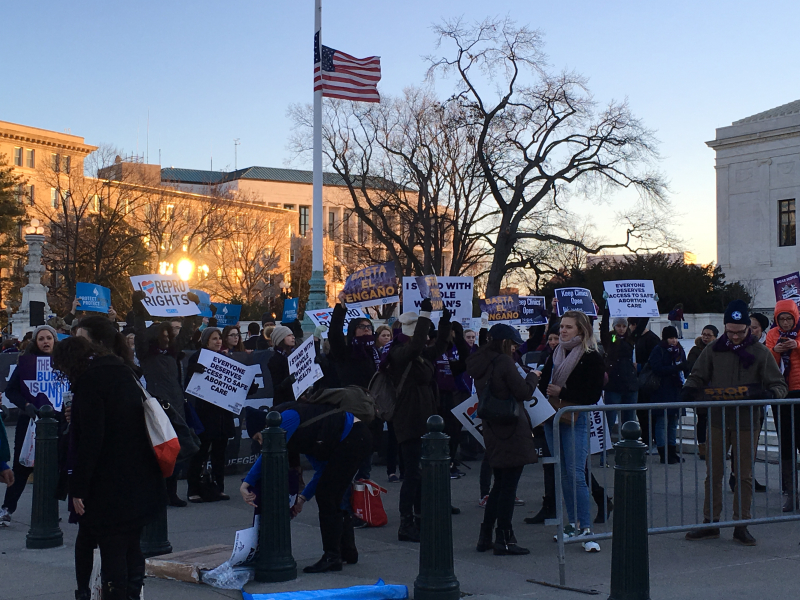 The Supreme Court’s decision in Whole Woman’s Health v. Hellerstedt to strike down two provisions of a Texas law that would have closed more than 75% of the state’s abortion clinics was a major victory for women’s rights. As I explain in an earlier post, the decision should deal a fatal blow to TRAP laws (targeted regulation of abortion providers), sham laws that purport to be health regulations but really are designed to impose onerous unnecessary requirements on abortion providers making it difficult or impossible for them to remain open.

Justice Breyer’s opinion makes it clear that the undue burden standard requires courts to balance the “burdens a law imposes on abortion access together with the benefits those laws confer.” The opinion also rejects the Fifth Circuit’s position that courts should defer to the legislature and not consider whether a law purporting to be a health regulation actually has any medical benefit, emphasizing that a higher level of judicial scrutiny is required when a constitutionally protected liberty is at stake.

Given the sham nature of Texas’ health justification, it’s not surprising that Justice Breyer’s opinion spends a significant amount of time showing why the Texas provisions do not provide any health benefit. Because the undue burden standard balances the burden and benefits of abortion restrictions, the lack of any health benefit significantly influenced the Court’s determination that the provisions are unconstitutional. But, perhaps as a result of this, the opinion spends less time discussing the burden imposed by the law and the impact of the provisions on women.

Notably absent from Justice Breyer’s opinion and Justice Ginsburg’s concurrence is any discussion of the significance of abortion in women’s lives and the reason why state laws designed to undermine women’s access to abortion violates their fundamental rights. Perhaps this indicates that the Court (with the exception of Justice Thomas) so accepts Planned Parenthood v. Casey’s holding that a woman’s right to choose to terminate a pregnancy is “central to [her] personal dignity and autonomy [and] the liberty protected by the Fourteenth Amendment” that it does not feel the need to repeat it.

But it would have been nice to hear the Court reaffirm reproductive choice as essential to women’s liberty and autonomy and perhaps even recognize that access to abortion also implicates other fundamental rights. International human rights law and countries around the world recognize that access to abortion can implicate women’s right to health, right to be free from discrimination based on gender and socio-economic status, and right to be free from torture and cruel and inhuman and degrading treatment. Indeed, Mellet v. Ireland, a recent case from the U.N. Human Rights Committee, found that Irish laws criminalizing abortion in most circumstances violated the human rights of a woman who sought to terminate a pregnancy after learning that the fetus she carried had a fatal genetic condition. Ireland’s abortion restrictions forced her to travel from her home in Dublin to Liverpool England (approximately 136 miles away) to obtain an abortion. The Committee found that under the circumstances forcing Mellet to travel out of the country to obtain an abortion constituted cruel, inhuman and degrading treatment, violated her right to privacy and constituted impermissible discrimination.

Although the challenged Texas provisions did not make it illegal for women to obtain a pre-viability abortion, like the restrictions in the Mellet case, they would have forced many women to travel hundreds of miles to obtain an abortion. Some women forced to travel may have been the victims of rape or domestic violence, carried a fetus with a severe fetal anomaly or experienced other circumstances making it more likely that the restrictions violated their right to be treated humanely and with dignity.

In Mellet, the Human Rights Committee specifically recognized that prohibiting access to abortion and forcing women to travel great distances to obtain treatment constitutes discrimination. In a concurring opinion, Committee member Sarah Cleveland explained that interference with women’s access to reproductive health services can violate their right to equality and non-discrimination by denying access to health services like abortion that only women need.

Cleveland also found that Ireland’s law constituted discrimination based on socio-economic status because forcing women to travel to get health services results in unequal access to care based on income. Recognizing the disproportionate impact of restrictions that limit access to health care services on poor women is important because the district court in Whole Woman’s Health found that the Texas provisions “erected a particularly high barrier for poor, rural or disadvantaged women.”

Although the U.S. Supreme Court did not recognize discrimination based on socio-economic status as an independent basis to strike down the Texas provisions, Justice Breyer made it clear that the undue burden standard requires that the Court consider whether the restrictions imposed a substantial obstacle in the path of certain women seeking an abortion even if they did not have the same impact on all women of reproductive age in Texas. And lower courts have recognized that application of the undue burden standard requires consideration of the ways abortion restrictions interact with women’s lived experiences. These aspects of the undue burden test will be crucial to ensuring that the test not only strikes down sham TRAP laws, but also protects the right to abortion for all women.