The Washington Post (The Fix blog): States that are more opposed to abortion rights have fewer abortions — but not fewer unintended pregnancies, by Aaron Blake:

It also divides the states. In 2010, according to a new study from the Guttmacher Institute, an abortion rights group, an estimated 11 percent of all unintended pregnancies in South Dakota were aborted. In New York, it was 54 percent.

In general, Guttmacher's numbers show that states with more people who oppose abortion rights tend to have lower abortion rates. But views on abortion tend to have much less impact on something else related to all this: unintended pregnancies. . . .

Representative Tim Ryan, an Ohio Democrat who previously opposed abortion rights, has officially changed sides. He’s very welcome in the pro-choice camp. With reproductive freedom under attack in the Republican-led Congress and in G.O.P.-controlled state legislatures around the country, the embattled cause needs all the new supporters it can get. . . .

Seven years ago, Carmen Guadalupe Vasquez Aldana went to jail in El Salvador. She was initially charged with abortion but prosecutors elevated the charge to aggravated homicide, arguing that the fetus was viable. Vasquez always contended that she did not have an abortion but had lost her unborn son due to medical complications late in the pregnancy.

On Wednesday, El Salvador's Legislative Assembly approved a recommendation by the country's high court that Vasquez be exonerated. That's a remarkable turn of events in a country with one of the strongest anti-abortion laws in the world. Even when the health of the mother is at risk, abortion is illegal. . . .

Federal Courts of Appeals have recently addressed two important abortion cases, either of which could end up before US Supreme Court. Last week, the US Court of Appeals for the Fifth Circuit heardoral arguments on the merits of a Texas law that requires abortion facilities to meet hospital-like building and construction standards. The US Court of Appeals for the Fourth Circuit issued a decision[PDF] in late December striking down a North Carolina pre-abortion ultrasound law that requires abortion providers to perform a sonogram before an abortion and to display and describe it to the woman. Each case is important for abortion rights in different ways, but a common theme the cases raise is the question of abortion exceptionalism: whether courts should treat abortion as an exceptional case when states purport to regulate it for health and safety reasons (in the Texas case) or when state restrictions encroach on the right against compelled speech (in the North Carolina case) . . . .

Forty-two years ago today, the Supreme Court issued its landmark Roe v. Wade decision, which legalized a woman's right to abortion. Ever since, America has debated and grappled with how to regulate a woman's right to choose. These graphs and charts help provide some context of how abortion access has changed in the United States since Roe, and how America's position on the issue has evolved over four decades. . . .

Some female Republican and centrist lawmakers helped scuttle a vote on a controversial measure to ban abortions after 20 weeks of pregnancy, prompting the House on Thursday to pass a separate, largely symbolic bill that would further restrict federal funding to pay for abortions. . . .

The bill approved Thursday, which would ban the use of federal funds to pay for abortions or health-insurance plans that cover abortion, passed 242-179. There are already bans in place on using most federal funds for abortion. One Republican, Rep. Richard Hanna of New York, voted against the bill.

The Washington Post - The Fix (blog): How Republicans won by losing on an abortion vote, by Chris Cillizza:

For the last several years, congressional Republicans have pursued what can be described as a short-term gain, long-term pain strategy. That is, the GOP-led House has championed, passed or, just as often, not passed legislation that pleases its base and the group of three dozen or so of its members who stake out the furthest territory on the right of ideological spectrum. That's been a fine thing for those members, most of whom sit in districts in which the only threat of losing comes in a primary, but it has been far more problematic for the overall brand of the party as it tries to recapture the White House in 2016. Think immigration reform.

On Wednesday, House Republicans -- whether purposely or by accident -- reversed that strategy, choosing some short-term pain in exchange for at least the possibility of long-term gain. . . .

House Republican leaders abruptly dropped plans late Wednesday to vote on an anti-abortion bill amid a revolt by female GOP lawmakers concerned that the legislation's restrictive language would once again spoil the party's chances of broadening its appeal to women and younger voters.

In recent days, as many as two dozen Republicans had raised concerns with the "Pain Capable Unborn Child Protection Act" that would ban abortions after the 20th week of a pregnancy. Sponsors said that exceptions would be allowed for a woman who is raped, but she could only get the abortion after reporting the rape to law enforcement.

A vote had been scheduled for Thursday to coincide with the annual March for Life, a gathering that brings hundreds of thousands of anti-abortion activists to Washington to mark the anniversary of the Supreme Court's 1973 Roe v. Wade decision that legalized abortion. . . .

Mark it down as a rare win for House GOP moderates. After scrambling into the evening on Wednesday, House Republican leaders decided to scrap a vote on a controversial anti-abortion measure scheduled to coincide with an annual gathering of anti-abortion advocates on Thursday because they couldn't round up enough support. . . .

The "Pain Capable Unborn Child Protection Act," is a bill banning so called "late-term abortions" -- those involving procedures for women who are beyond 20 weeks into their pregnancy. Several House GOP women protested language in the bill that requires those women who seek an exception to the ban because they were raped have to back up their claim with a police report. A similar measure has passed the House in 2013, but this time some female members -- including some who voted for it last time -- are pushing for that requirement to be stripped out. . . .

This is what happens when opponents of abortion stray from a simplistic but consistent position that all abortion is murder.  They wade into a messy quagmire of exceptions -- which women "deserve" to have an abortion? -- a discussion that only serves to highlight that they do not, in fact, hold a consistent position that an embryo or fetus is a person.  (The discredited claim that a fetus can perceive pain at 20 weeks indeed was supposed to cement the fetus's status as a person and justify the ban in question.) I've written more about this in the following articles: The Meaning of 'Life': Belief and Reason in the Abortion Debate and  Roe v. Wade's 40th Anniversary: A Moment of Truth for the Anti-Abortion-Rights Movement?

On his return trip from Asia, Pope Francis made strong statements supporting the church's ban on artificial means of birth control. He also said Catholics should practice "responsible parenthood" and don't have to breed "like rabbits." . . .

Catholics should not feel they have to breed "like rabbits" because of the Church's ban on contraception, Pope Francis said on Monday, suggesting approved natural family planning methods. . . .

The leader of the 1.2-billion-strong Roman Catholic Church restated its ban on artificial birth control, adding there were "many ways that are allowed" to practise natural family planning. . . .

The Obama administration on Tuesday threatened to veto the GOP-backed bill to ban abortions after 20 weeks, calling it a “direct challenge” to a court-protected right for women.

The House is planning to vote on the bill Thursday, the anniversary of the landmark Supreme Court abortion case, Roe v. Wade, and the same day that thousands of anti-abortion advocates will participate in the March for Life. . . .

The start of 2015 finds no letup in the attacks on a woman’s constitutionally protected right to make her own childbearing decisions. Republican lawmakers and organizations devoted to dismantling reproductive freedom have succeeded in shrinking the already inadequate number of abortion providers, making it exceedingly difficult, if not impossible, for women — especially young and poor women — to obtain safe and legal abortion services in large swaths Texas and other parts of the country. . . . 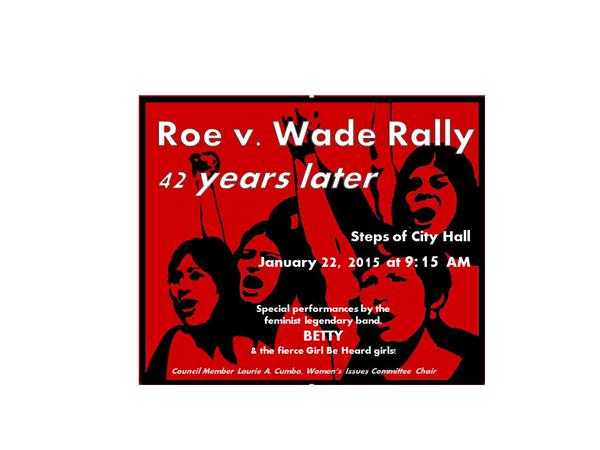 Will 20-Week Abortion Ban Advance in the New Congress?

The new Congress had barely blinked awake when Republicans got back to their usual business – an abortion ban.

The Hill reports that on Monday, the first day of the new session, Rep. Trent Franks and Rep. Marsha Blackburn reintroduced the tendentiously named “Pain Capable Unborn Child Protection Act.” It bans abortion after 20 weeks on the medically-disputed theory that fetuses can feel pain at that point. . . .

Judge Jane Magnus-Stinson of the US District Court for the Southern District of Indiana[official website] entered a permanent injunction Wednesday barring Indiana law IC 16-18-2 [text], which would redefine what qualifies as an abortion clinic and shut down Planned Parenthood's Lafayette facility. The law was barred for imposing rules on facilities that provided only medical abortions that would not have been imposed on physicians' offices providing the same service, violating the Equal Protection Clause of the Fourteenth Amendment [text]. . . .

Lawyers for abortion clinics squared off with Texas state attorneys in a federal appeals court here on Wednesday, arguing over the constitutionality of stringent abortion clinic rules that would force more than half the remaining abortion providers in Texas to close.

But more is at stake than whether large portions of South and West Texas will be left with no abortion clinics, forcing some women to drive hundreds of miles for an abortion, for safety reasons that doctors and clinic owners call a pretense.

The case argued here — along with others arising from the hundreds ofabortion restrictions adopted by more than half of the states in recent years — poses issues that are likely to end up before the Supreme Court in the next year or two, many legal experts say . . . .

Is 150 miles too far to drive in order to get an abortion? In some parts of Texas, that distance could get a lot longer, and it’s up to a federal appeals court to decide whether that places too much of a burden on women seeking to end their pregnancies. . . .

“It’s always been a little bit unclear exactly what constitutes an ‘undue burden,’” said Caitlin Borgmann, a professor at CUNY School of Law with expertise on reproductive rights law. . . .

“If women can’t access abortions, then the right is meaningless,” Borgmann said. “This very much goes to the core of what it means to be a constitutional right to abortion.”

The Al Jazeera America story includes interactive maps that show what parts of Texas would be left without any available abortion clinics if the ambulatory surgical center requirement is upheld.