Anti-Choice Activists Home in on Albuquerque

. . . Albuquerque has become the latest flash point in the abortion wars, with Operation Rescue, the militant group based in Kansas, calling it the “late-term abortion capital of the country.” This is because a private clinic, Southwestern Women’s Options, is one of only a few nationwide that offers abortions after the sixth month of pregnancy. . . .

The number of women using emergency contraceptives — commonly known as the morning-after pill or Plan B — has increased significantly in the last decade, according to the results of a new survey released by the Centers for Disease Control and Prevention. From 2002 to 2006-10, the percentage of women who reported using an emergency contraceptive in the last 12 months rose to 2.2 percent from 0.9 percent, a 144 percent change. . . .

A federal appeals court has ruled that a group of Louisiana abortion providers lack the standing to challenge part of a 1997 law that can make them liable for damage caused by an abortion procedure and denies them access to a state-run fund for paying malpractice judgments.

The law at issue essentially subjects abortion providers to strict liability simply for performing an abortion and excludes them from the benefits of Louisiana's medical malpractice reform regime. In deciding the original, preenforcement challenge to this law, the Fifth Circuit held in 2001 that plaintiffs could not obtain relief because the law creates only a private cause of action not enforced by the state.  I wrote about Okpalobi  v. Foster here: Legislative Arrogance and Constitutional Accountability.

The Supreme Court's Next Abortion Case

The New York Times - Opinionator blog: The Next Abortion Case Is Here, by Linda Greenhouse:

Justice Anthony M. Kennedy, author of the 5-to-4 opinion in Junethat struck down the Defense of Marriage Act, may well be a hero to the gay rights community, and deservedly so. But he’s also the author of the 5-to-4 opinion that upheld the federal ban on so-called partial birth abortion back in 2007, and abortion-rights advocates have viewed with something close to dread the prospect that he could play a similarly decisive role in the Supreme Court’s next abortion case.

Signs of real social progress are often very subtle. They ought to be, by nature, since real progress is really a process of normalization. When same-sex marriage doesn’t merit the “same-sex” modifier, for instance, in most mainstream news publications, it’s a signal that most members of our society think beyond the man + woman = monogamous married couple for ever and ever paradigm. Or, when a wedding announcement in the New York Times openly discusses abortion as a difficult yet pragmatic decision a young couple made before they were financially and emotionally ready to have a kid, it’s a signal that a vast majority of Times readers (at the very least) recognize that having an abortion is a completely legitimate option.

On Friday, the Times announced the wedding of Faith Rein and Udonis Haslem, a power forward on the Miami Heat’s championship-nabbing team. . . .

To see the growing gulf over abortion between California and other states, look no further than the Colorado River that marks the state’s border with Arizona.

On the California side, a bill heading soon to Democratic Governor Jerry Brown would make it easier for rural women to terminate pregnancies by allowing nurse practitioners and midwives to perform abortions in the first 12 weeks, now provided only by doctors. . . .

Conference: Beyond Roe: Reproductive Justice in a Changing World 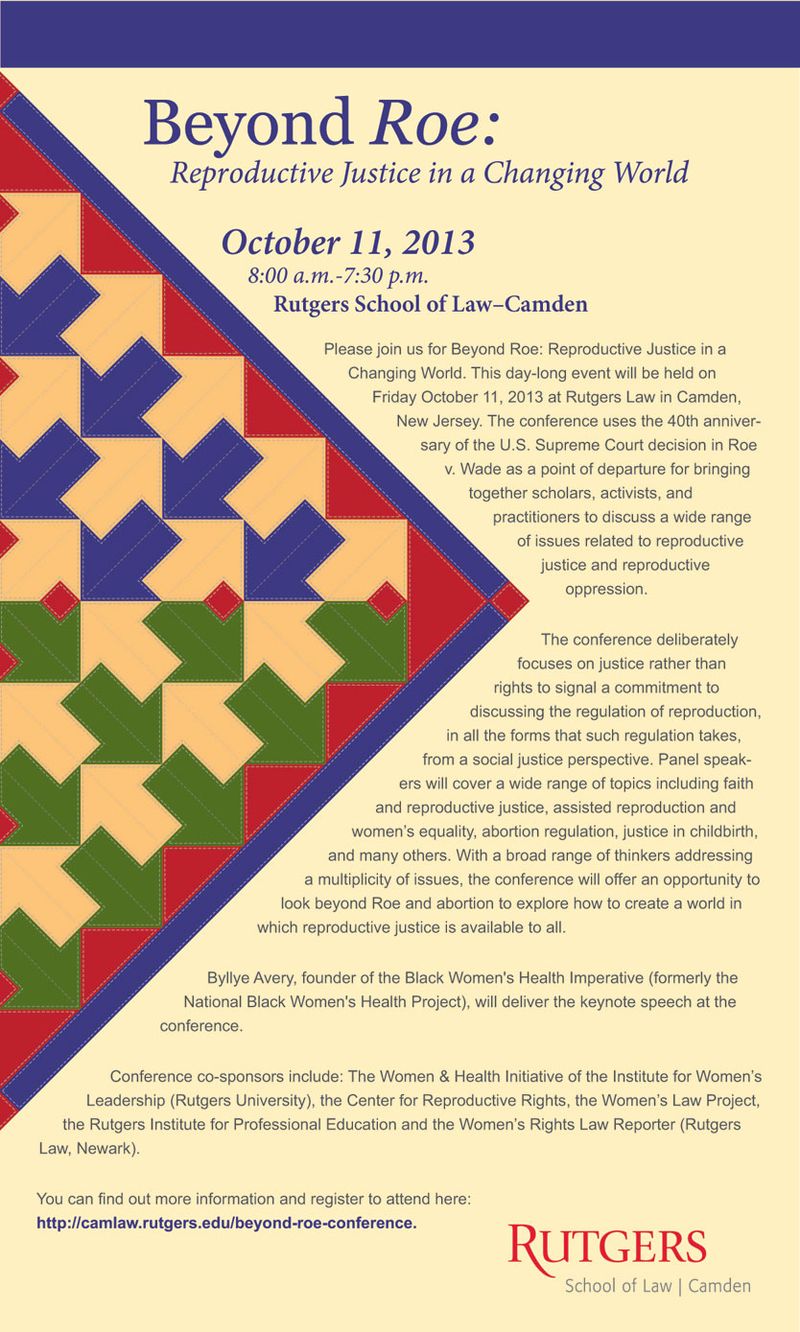