Coverage from the Associated Press here.

The word “abortion” first appeared in a Republican platform in 1976, when the Party hadn’t yet made up its mind on reproductive freedom. The platform acknowledged that “the question of abortion is one of the most difficult and controversial of our time.” The 1976 G.O.P. favored “a continuance of the public dialogue on abortion,” which it called a “moral and personal issue,” while expressing support for “those who seek enactment of a constitutional amendment to restore protection of the right to life for unborn children.”Decades later, there is no more in-between language. . . .

NPR: Why Does Pregnancy Last 9 Months?, by Scott Hensley:

Wouldn't it be better if tiny humans were born able to walk, like horses, or generally were readier for the rigors of the world, like, say, chimps? . . .

The issue of abortion rights was thrust into the spotlight this month after the Republican Senate candidate Todd Akin made some controversial remarks on the matter. A new CBS News poll, however, shows that most voters, Democrats and Republicans alike, are willing to look past the issue when it comes to supporting a political candidate. . . .

Questioning Why Any Women Vote Republican

The noxious “legitimate rape” comment by Todd Akin, Missouri congressman and Senate candidate, has me once again pondering a simple question: Why do any women vote Republican?

The Republican establishment rushed in to pressure Akin to drop out of the race — something that he refused to do — in part because they want to win the seat, win control of the Senate and win Missouri for Romney. A SurveyUSA poll earlier this month — before “legitimate rape” — found Romney and Obama in a statistical tie in the state. . . .

A rally hosted here Thursday on the steps of the capitol by this year’s “No Personhood Campaign” featured speakers who decried government intervention into citizens’ private lives and admonished overreaching political activists who would tap the organs of the state to solve perceived social ills. . . .

One of the scare tactics of opponents of the Affordable Care Act was to float the idea that it would increase the abortion rate, by giving women who were previously forced to give birth out of a lack of abortion funding a chance at insurance coverage. This fear nearly tanked the law, and only by signing an executive order that strongly limits the right of insurance companies to cover abortion was Obama able to save his signature legislation. Now new statistics have come out from the state of Massachusetts, whose health care law signed by Mitt Romney is almost exactly like the ACA—except without the abortion restrictions. Guess what? Instead of the predicted spike in abortions, it turns out that expanding women's access to comprehensive health care quite likely lowered the abortion rate in Massachusetts. . . .

The Washington Post editorial: How is denying health services to the poor 'a win for women?':

ON TUESDAY, a federal appeals court lifted a preliminary injunction against a measure that excludes Planned Parenthood clinics in Texas from receiving state funds. In March, Gov. Rick Perry (R) announced that his state would rather forfeit $35 million in annual federal funding for the Women’s Health Program — a Medicaid waiver program that provides low-income women with contraceptives and cancer screenings — than see any more state tax dollars go to a supposedly pro-abortion organization. Planned Parenthood appealed, but Texas now has the authority to defund the organization. Bottom line: Hundreds of thousands of poor Texas women are likely to be denied a health-care provider because of their state’s ideological zeal. . . .

The New York Times op-ed: Men, Who Needs Them?, by Greg Hampikian:

Mammals are named after their defining characteristic, the glands capable of sustaining a life for years after birth — glands that are functional only in the female. And yet while the term “mammal” is based on an objective analysis of shared traits, the genus name for human beings, Homo, reflects an 18th-century masculine bias in science.

That bias, however, is becoming harder to sustain, as men become less relevant to both reproduction and parenting. Women aren’t just becoming men’s equals. It’s increasingly clear that “mankind” itself is a gross misnomer: an uninterrupted, intimate and essential maternal connection defines our species. . . .

The Boston Globe: Abortion opposition group to back Scott Brown, by Michael Levenson:

The state’s leading antiabortion group said Thursday that it plans to support Senator Scott Brown’s reelection campaign, potentially undercutting the Republican’s effort this week to distance himself from his party’s support for strict antiabortion measures. . . .

The three-judge panel says the government has correctly interpreted a law that bans the use of federal funds to destroy human embryos for research. The ruling is unlikely to put the issue to rest and one of the judges pleaded for Congress to make clear what the government should and should not be able to do. . . .

See also this story by the Associated Press.

Doctors are debunking Rep. Todd Akin's misinformation on rape and pregnancy.  Anderson Cooper talks to Dr. David Grimes about those claims and his reaction to Dr. Wilke's false information they are based upon. 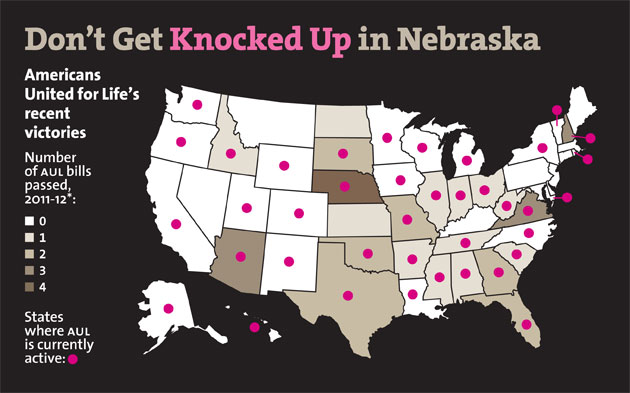 From transvaginal ultrasounds to attacks on Planned Parenthood, Americans United for Life is targeting reproductive rights one state at a time.

"We're having a party," Charmaine Yoest tells me when I arrive for a lunch meeting at her office on a sweltering summer day in Washington, DC. I'd expected a one-on-one interview with the charismatic president and CEO of Americans United for Life, the legal arm of the pro-life movement, but she's brought along four other women: AUL's vice president of external affairs, two staff attorneys, and her 19-year-old daughter, Hannah. . . .

Will Saletan on Romney and Abortion

Mitt Romney isn’t an extremist. He’s a symptom of your failure to make reproductive health a voting issue.

According to President Obama’s campaign, Mitt Romney is an abortion extremist. “Romney backed a proposal to outlaw all abortion, even in cases of rape and incest,” says the Obama campaign. He “supports the Republican Party platform, which … bans abortion without those exceptions.” He’s “in lockstep” with Rep. Todd Akin, R-Missouri, who thinks abortion should be illegal even in cases of what Akin calls “legitimate” rape.

The 2012 Republican platform uses some of the same language on abortion that the party has supported since 1984, supporting legislation that would give 14th amendments rights to “unborn children,” effectively outlawing abortion.

It also endorsed something new: For the first time ever, the Republican platform includes language making the case that abortion is bad for a woman’s “health and well-being.” . . .

The New York Times - The Caucus blog: Abortion and Akin Were Off Limits During Romney Interview, Reporter Says, by Brian Stelter:

It’s the sort of statement that leaves journalists slack-jawed: “The one stipulation to the interview was that I not ask him about abortion or Todd Akin.”

That’s what Mitt Romney’s campaign demanded, said Shaun Boyd, a reporter for the CBS-owned television station in Denver, when she interviewed the Republican presidential candidate on Thursday. . . .

(CBS News) A male birth control pill advanced one step closer to reality, a team of cancer and fertility researchers announced Thursday after their latest discovery. . . .

The Washington Post (op-ed column): On abortion, a matter of exception, by Ruth Marcus:

There’s something off — something a bit cowardly, actually — about the positions of both parties in the abortion debate refueled by the asinine remarks of Rep. Todd Akin (R-Mo.).

Akin’s comments have left Republicans scrambling to avoid the politically unpalatable implications of the anti-abortion views central to their party. Democrats, meanwhile, are delighted to focus on a tiny subset of abortion exceptions — even as they shy away from standing up for the broader principle that women get to decide whether to continue an unwanted pregnancy, no matter how it happened. . . .

A federal court has ruled in favor of Texas, which wants to ban state funding for Planned Parenthood affiliates participating in a health program for low-income women because the family planning network performs abortions.

The ruling vacated a lower court's preliminary injunction and opened the way for Texas to sever money to clinics affiliated with Planned Parenthood, the nation's largest abortion provider, which has come under recent attack from anti-abortion politicians. . . .

The Republican-controlled State Legislature in Texas and Gov. Rick Perry are perfectly willing to endanger the general health and welfare of low-income women to further their agenda of eroding abortion rights. And, now, a federal appeals court has given them a green light to do that, at least temporarily. . . .

It is impossible to overstate the callousness of the state regulation and the harm it will inflict. . . .

The Onion: I Misspoke—What I Meant To Say Is 'I Am Dumb As Dog Shit And I Am A Terrible Human Being':

As a politician, I often find myself in situations where, unfortunately, I express a certain thought or idea poorly, or find my words taken out of context. Indeed, that is what happened this weekend. Upon reviewing the impromptu remarks I made Sunday afternoon, I can now see that I used the wrong words in the wrong way. I would now like to set the record straight with the American people and clear up some confusion about what it was I intended to convey. . . .

The Daily Beast: Abortion Opponents and Many Democrats Want Todd Akin to Stay in Senate Race, by Patricia Murphy:

While Romney and the GOP establishment are urging the Missouri congressman to quit over his ‘legitimate rape’ comment, a mix of abortion opponents and many Democrats, including his opponent, Claire McCaskill, are urging him to stay—for their own political gain.

The pile-on of Rep. Todd Akin was swift and harsh Monday as video of Akin discussing the benign effects of "legitimate rape" on women shot across TV and computer screens. But a handful of people and organizations—from conservative Republicans to liberal Democrats—have remained silent or even praised the congressman, holding out hope that he would remain in the race against Claire McCaskill in the U.S. Senate. . . .

(CBS News)Despite mounting pressure to withdraw from his Senate race after offensive comments he made about rape and abortion, Rep. Todd Akin, R-Mo., isn't backing down, and recorded a TV ad apologizing for his remarks. . . .