Male Condom Gets an Upgrade 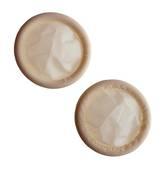 The problem with condoms is that they don't get used as often as they should. But an innovative new product by a British biotech firm may change men's minds: called CSD500, the condom helps men keep their erection longer.

It's been dubbed the "Viagra condom," but that's not entirely accurate. The new product is lined with a vasodilating gel, which increases blood flow to the penis and helps maintain erection. But unlike the pill, it's not designed for men who have erectile dysfunction; rather, it's meant for men who have trouble keeping erectios specifically while using a condom. . . .

Listed below are links to weblogs that reference Male Condom Gets an Upgrade: