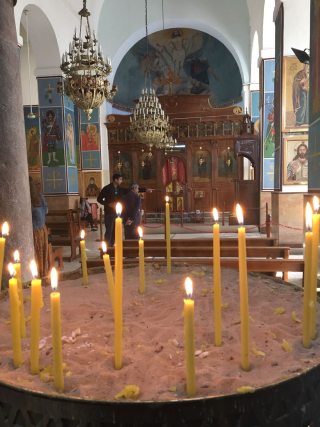 Our fourth day in Jordan was another combination of sightseeing and work, and the last one we will have like that for a while. The next several days are full of stakeholder meetings that will leave less time for sightseeing. It’s been inspiring to see the beauty of this country while at the same time learning about its response to the Syrian crisis. Sometimes those two things overlap.

Jordan is a country that is rich with religious history. For me personally, as my first visit to a Muslim-majority country, it has been beautiful to hear the adhan (call to prayer) echoing across the city, a constant reminder of spirituality throughout each day. Even as we drove from the airport, the number of mosques, lit up green against the night sky, was striking.

Christianity, too, has deep roots in the country, and our sightseeing today took us to some of these sites. We toured two ancient Christian churches in the city of Madaba just outside of Amman—one Greek Orthodox and one Roman Catholic. Both churches are famous for their ancient mosaics.  During our visit, we ventured beneath one church to see its Byzantine foundations, dating from the 6th century. Our third church visit was to Mount Nebo, a holy site for both Christians and Muslims, who share a common devotion to Moses as a prophet.

Islam and Christianity exist side-by-side in Jordan, their common histories intertwined. In Madaba, Muslims and Christians share neighborhoods and mosques are across the street from Christian churches.

The Jordanian response to the Syrian refugee crisis seems in many ways to reflect the coexistence that is built into life here. It would be naïve to think that any time two differing cultures intersect it is always harmonious, and it is true that our conversations (and survey data collected by the Jordanian government) have not painted a uniformly rosy picture of Jordanian-Syrian relations. And yet, in our individual conversations with Jordanians, we continue to be impressed by the level of compassion we hear for the hundreds of thousands of Syrian refugees that have poured into the country over the last six years.

Today’s conversation with a Jordanian who works with an international NGO once again reflected that perspective. She told us that Jordanians are a welcoming people; the diversity that has existed in their country for decades has helped to make them that way. Most people she knows, she said, feel compassion for the refugees, even if their own economic situations are difficult. What’s needed, she told us, are programs that meet the basic needs of both Jordanians and refugees, with a focus on jobs. (Unemployment is a problem in Jordan, and we have heard in other conversations that it is one of the points of tension between Jordanians and Syrian refugees).

The portrayal of Syrian refugees by the mainstream media in Jordan is also generally positive, focusing on the humanitarian needs of Syrians and the Jordanian spirit of welcome.  Even if local media is not always regarded as entirely trustworthy, the media narrative on refugees sets a tone of receptiveness and welcome.

Our conversation today also reinforced the importance of listening to local voices in communities affected by crises. We talked today about how international NGOs sometimes fail to address the real priorities on the ground because of the perception that “we know best” and a failure to listen to what the community says it needs or to put local people in control. 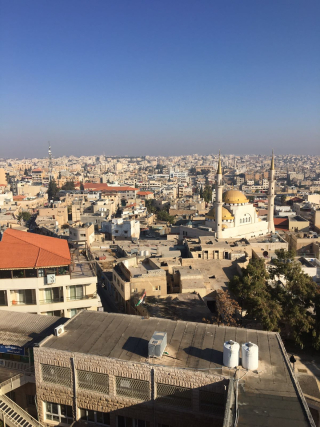 One example we discussed is the flurry of NGO activity around the problem of child marriage among Syrian refugees. While no doubt a major problem, the person we spoke to today expressed some frustration that the money used for these kinds of interventions could be better spent meeting Syrians’ basic needs, since it is severe economic pressures that drive parents to marry off their girls young in the first place. But instead, foreign donors latch on to a secondary problem that fails to meet the real need or make a lasting impact.  The failure to address the priority needs of refugees reveals a lack of insight and an attitude of condescension and lack of respect for the ability of local communities to assess their own needs.

Western international NGOs and their funders would do well to learn from the Jordanian model of coexistence. Living together, learning from each other, and mutual respect are the only ways that meaningful and sustainable work can be done to address human rights needs around the world.