A group of Rutgers Law School students have the unique opportunity to visit Jordan as part of a seminar on the Syrian Refugee Crisis and International Human Rights.  Under the supervision of Professor Sahar Aziz and Professor Jeena Shah, the students are meeting with various stakeholders in government and nongovernmental organizations to understand the complex political, economic, and social factors that affect both the refugees and receiving countries.

By going on the ground and hearing from persons with direct knowledge of the Syrian refugee crisis, the students can compare the media and political rhetoric in Western media with the facts on the ground.  As future lawyers, the students will apply their critical thinking, research, and interpersonal skills to assess a complex set of facts within the broader framework of international human rights.

As a means of informing others with an interest in the Syrian refugee crisis, the students are blogging about their experiences in Jordan. As such, the Race and the Law Profs blog will be posting a daily blog from a student for the next two weeks.  Here is the first post.  Stay tuned for their daily reflections.

WE MADE IT TO JORDAN: DAY 1

We made it to Jordan! After nearly 20 hours of traveling, we are finally in the Hashemite Kingdom of Jordan known for its hospitable people, ancient civilizations, and central location in the Middle East.

While on the connecting flight from Paris to Amman, I sat beside a kind older woman, ethnically of Serbian descent, who was traveling back to her home in Amman after visiting her daughter in the United States. We spent the entire five-hour flight discussing topics including the Jordanian perspective on the Syrian refugee crisis and potential solutions, the effects of the numerous wars in the Middle East, her family history, and even the best places to eat in Jordan. She also shared with me that her son works for a humanitarian organization, focusing on documenting the Syrian refugee crisis in Jordan. Because Jordan has nearly 1 million Syrian refugees and displaced Syrians, it offers a unique opportunity to understand the challenges faced by recipient countries.  We look forward to learning more about the complexity of the Syrian refugee issue, and its impact on Middle East countries. 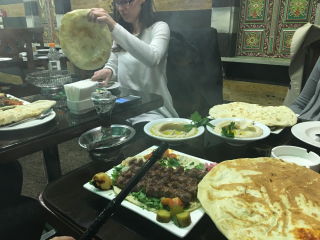 After finally arriving at the airport in Jordan, we couldn’t go to sleep without getting a first taste of the highly praised food in Jordan. The hotel staff members recommended a restaurant that serves grilled meats and appetizers. The meal was delicious, and the staff were hospitable.  As we savored the authentic Middle Eastern cuisine, we planned the following day’s schedule and decided to go visit the famous Petra and Wadi Rum.

Our day finally ended at about 12:30 AM. We have a lot of recovery to do for our big day tomorrow that will begin at 7:00 AM.

In the wake of the mass shooting in Orlando, former U.S. Secretary of State and presumptive Democratic presidential nominee Hillary Clinton delivered a speech on national security.  In Cleveland, Ohio, she spoke of the attack on the Pulse nightclub and about preventing similar tragedies in the future through gun control and enhanced counter-terrorism programs.

One of Clinton’s claims about anti-Muslim hate crimes and political rhetoric this election cycle attracted immediate attention, however, including fact checks by PBS and others. Here’s what she said:

Inflammatory anti-Muslim rhetoric and threatening to ban the families and friends of Muslim Americans as well as millions of Muslim business people and tourists from entering our country hurts the vast majority of Muslims who love freedom and hate terror.

So does saying that we have to start special surveillance on our fellow Americans because of their religion. It’s no coincidence that hate crimes against American Muslims and mosques have tripled after Paris and San Bernardino. That’s wrong. And it’s also dangerous. It plays right into the terrorists’ hands.

Clinton's remarks sparked some questions, including did anti-Muslim hate crimes actually triple last year?  And, just how bad is anti-Muslim violence in the U.S.?

A recent research study from Georgetown University considered this very inquiry. The study, When Islamophobia Turns Violent:  The 2016 U.S. Presidential Elections, examined anti-Muslim violence domestically during two distinct but overlapping time periods.  First, it studied acts or threats of violence against Muslim individuals and institutions during the course of 2015.  Second, it looked at levels of violence during this presidential election cycle.  Third, it tracked Islamophobic statements by those running for the White House.

The study ultimately found a positive relationship, as noted by Clinton, between the verbal and physical attacks against the minority faith community.

Levels of anti-Muslim violence did in fact triple from last October to November when the Paris terrorist attacks occurred and Islamophobic political rhetoric – led by presumptive Republic presidential nominee Donald Trump - ensued.  Whereas the study documented ten (10) incidents in October, there were thirty-five (35) such events in November.

What Clinton did not mention, however, is that anti-Muslim violence multiplied five (5) fold last December in the aftermath of the mass shooting in San Bernardino coupled with Mr. Trump’s publicized ban against Muslim immigration. Ostensibly, the numbers dipped back to October levels in January (11), February (13) and March (7).  A closer look reveals, however, that even during these latter months, anti-Muslim violence remained 3 to 5 times higher than pre-election cycle levels.  In fact, there were only two (2) such attacks in March 2015, when Texan Senator Ted Cruz first announced his bid for the White House.

Significantly, anti-Muslim violence spiked after terrorist attacks where a hostile political climate was exacerbated by inflammatory political rhetoric by Mr. Trump. Contrary to popular perception, the American Muslim community has not always suffered a violent backlash after a real or perceived act of terror.

Representative is American response to the mass shooting in Chattanooga, Tennessee, last July. On July 16th, a young American Muslim with a history of mental illness perpetrated a mass shooting, killing five victims.  Yet, the anti-Muslim backlash was minimal, as documented by the Georgetown study.

Why?  The decision by the local Muslim community to cancel Eid celebrations marking the end of the fasting month of Ramadan, scheduled for that day, may have helped to deflect potential retaliatory attacks. Rather than celebrating Eid, Chattanooga Muslims joined the larger community in their collective grieving. To appreciate the magnitude of this decision, imagine canceling Christmas or Hanukkah.

Additionally, following the Chattanooga shooting, President Obama publicaly characterized the shooter as a “lone gunman” as opposed to a member of a terrorist cell connected to a larger criminal network. He made no reference to “radical Islam” or “jihadists.”  Nor did he cast the Islamic faith or Muslim community in a negative light.

Arguably, the lack of backlash against Chattanooga Muslims speaks to the significant role that our leaders play in remedying, or stoking, a general climate of fear and hostility. Our political leaders are potentially capable of contributing to an atmosphere of hostility toward American Muslims through the language that they use and the policies they propagate.

We need look no further than the current U.S. presidential election cycle to fact-check that claim.

Engy Abdelkader is a faculty member at Georgetown's Edmund A. Walsh School of Foreign Service where she is a Senior Research Fellow with the Bridge Initiative, a research project on Islamophobia.  The author of "When Islamophobia Turns Violent: The 2016 U.S. Presidential Elections," she teaches courses on national security and civil liberties in the post 9/11 era and international terrorism and human rights.

I believe that one of the functions of this blog is to share innovative scholarship that addresses race and the law themes.  In that spirit, I want to announce the publication of HIP HOP AND THE LAW, an innovative scholarly collaboration and textbook edited by Professors andré douglas pond cummings, Donald F. Tibbs, and the late Professor Pamela Bridgewater-Toure. 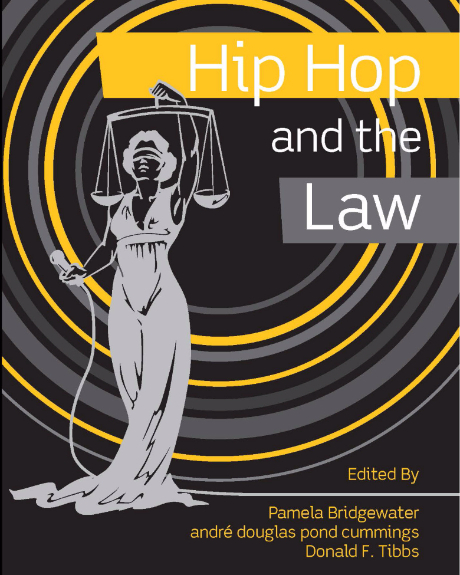 The book features scholars and attorneys from across the legal academy.  (Full disclosure: I am a contributor to the volume.)  The book's chapters explore the varied ways hip hop music and culture interact with and comment on American law. These essays speak to a multitude of substantive issues, including the content of a hip hop and the law perspective and the interaction between the hip hop consciousness and 21st century legal activism. These chapters also provide incisive hip-hop driven accounts of various doctrinal issues ranging from intellectual property law to mass incarceration.

This volume is available here from Carolina Academic Press.  It is not only a substantive contribution to this growing area of scholarship, but it also provides a substantial text for classroom use for those interested in offering a Hip Hop and the Law course. I encourage scholars and the public to share and make use of this resource.