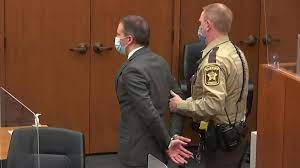 Convicting a police officer is rare.

Moreover, the decision for the police chief and other officers to cross the blue line and speak out against Chauvin’s behavior was nothing short of historic.

Chauvin’s callous action of placing his weight on Floyd’s neck traumatized a nation.  It was so horrific to watch and so blatant that it turned people from around the world into allies.

Even police officers were seen taking a knee and joining protesters. It was truly a watershed moment where a large part of the community said "enough." Sadly, the country has a long history of injustices being committed by the police against people of color without accountability in court.

The country needed a guilty verdict. So did the family, the communities of color and law enforcement.

The guilty verdict validated Floyd as a human being who deserved to be treated with dignity regardless of his past flaws or mistakes. For others, the verdict is overshadowed by the most recent victims of police violence, 13-year-old Adam Toledo and 20-year-old Daunte Wright. Despite protests and calls for reform, the body count of unarmed children and adults killed by police continue to grow.

While policing is an honorable profession, it is clear that there is a problem. The real meaning and impact of the guilty verdict is complicated.

The jury had to also conclude that Chauvin’s actions were a substantial causal factor in Floyd’s death. The law did not require that Floyd had to be in perfect health.

For practical purposes, the fact that Chauvin was convicted in Minnesota will have no binding impact on the laws in other states. In fact, the uniqueness of Chauvin’s case combined with the rarity of a conviction might only reinforce the belief that the police may act with impunity unless there are multiple surveillance videos and police officers willing to testify against the defendant.

Unless the law changes, the public should not expect an increase in convictions involving police misconduct. Most state laws allow the police to use deadly force if a suspect poses a serious threat to others or the officer. In the rare instance that charges are filed and there is a trial, the issue tends to focus on whether the officer’s fear of harm was reasonable.

Many legal experts expected Chauvin to be found guilty of something. The disturbing fact is 98.3% of police killings failed to trigger criminal charges. One case in point was the killing of 12-year-old Tamir Rice in Cleveland. Although the city settled the civil lawsuit, the officer who killed Rice was never held accountable in a courtroom.

When charges are brought, officers are rarely convicted.  According to the Police Integrity Research Group, only four out of the more than 100 nonfederal officers charged in a person’s death were convicted of murder; 18 were convicted of manslaughter or reckless or negligent homicide.

Perhaps the most important aspect of Tuesday's jury verdict was a signal to the country that it’s time for reform.

True change cannot come from jury verdicts but through legislation. Recently, President Joe Biden has signaled his support of the George Floyd Justice in Policing Act, which would include banning certain police practices like chokeholds and federal no-knock warrants and reform qualified immunity laws.

The story of Floyd cannot merely end with a jury verdict. If we are to make the statement by Floyd’s daughter, 6-year-old Gianna, true that her “daddy changed the world,” we must change policing by changing the law.

Njeri Mathis Rutledge is Professor of Law at South Texas College of Law Houston. Follow her on Twitter: @NjeriRutledge

This article was originally published at USA Today on 4/20/21. You can read it here.