By Nadia B. Ahmad

What does pedantic mean?

In frequently asked questions about the word "pedantic," the Merriam Webster Dictionary explains, "Pedantic is an insulting word used to describe someone who annoys others by correcting small errors, caring too much about minor details, or emphasizing their own expertise especially in some narrow or boring subject matter."

The word, "pedantic," arrives in Middle English via French in 1580's/1600's in the midst of the Renaissance period during the Elizabethan and Jacobean ages.

The word is also said to have origins from Latin via Greek. According to the Latin Lexicon:

paedagōgus, i, m., = παιδαγωγός, lit. a slave who took the children to school and had the charge of them at home, a governor, preceptor, pedagogue (cf. praeceptor).

So while the definition and usage of pedantic have expanded and constricted from ancient times to the post-modern era, what has remained the same is the idea of a pedantic person not being someone particularly welcome. Someone who quibbles over small matters losing sight of the big picture.

Pedantic racism entails people walking around not realizing they are being racist as well as those who are racist and don't feel inclined to correct themselves.

Now 2.5 days into 2021, I realize the pedantic racism will continue to fester even as the end of the pandemic nightmare is in sight.

Professor David Bernstein (George Mason Law) writes in The Volokh Conspiracy, "Diversity" Nonsense Cost Tens of Thousands of Lives. Professor Bernstein teaches Constitutional Law, Evidence, Expert and Scientific Evidence, Products Liability,  and Torts and is considered an expert in Constitutional Law, Product Liability, Torts,  and Tort Reform. Professor Bernstein's extensive scholarly record would confirm such. Yet in his recent blog post addressing delays in the Moderna Vaccine, he may have considered conducting a search on Google. For legal scholars, Google often serves as a point of initial assessment. Conducting a preliminary Google search may have provided more insights to his pedantic legal musing published in the Volokh Conspiracy blog.

Professor Bernstein was concerned that "Moderna Delayed its Vaccine Trials to Ensure it had 'Enough' Minority Representation." He then goes on to question the delay on account of failure to include an array of racial and ethnic groups in the testing sample.  He writes:

This is particularly egregious because apparently Moderna felt the need to ensure sufficient representation of Hispanic Americans. Even if you buy the dubious notion that there is a significant chance that vaccines will have significantly different effects by "race," what race are Hispanics supposed to be, exactly? The average American Hispanic is about 3/4 European by descent, based on DNA studies. Essentially, then, Moderna allowed tens of thousands of people to die to ensure that "enough" white people who happen to have Spanish-speaking ancestors were included.

When questioned on his initial post about the scientific evidence of this discussion, he updates his post as follows:

UPDATE: Some readers have questioned where I got the notion that American Hispanics are, on average, mostly European in origin. The answer is from this study, published in the American Journal of Human Genetics: "On average, we estimate that Latinos in the US carry 18.0% Native American ancestry, 65.1% European ancestry, and 6.2% African ancestry." That's a bit off from the 3/4 I cited but:

(b) then you have to consider the fact that the study uses the "Latino" category, whereas I (and FDA-approved studies like Moderna's) use "Hispanic." Hispanic Americans include non-Latinos whose ancestors (or themselves) immigrated from Spain, and who are 100% or so European in origin. Plus, you have self-described "Hispanos," Americans in the Southwest descended from Mexicans who lived in the territories conquered by the US in 1848. Their origins are overwhelmingly Spanish, and they generally don't consider themselves Latinos, but would likely identify themselves as "Hispanic." So between Spanish immigrants and their descendants and Hispanos add a percentage point or two, and you get that the average self-identified Hispanic American is "about 3/4" European by descent. If someone is aware of alternative estimates published in scientific journals, please let me know.

Professor Bernstein is asking the wrong questions and ignoring the bigger issue about ensuring the effectiveness of the vaccine in wider subsets of the population to improve its efficacy, in fact, for Caucasians. I am not an expert in product liability or torts like Professor Bernstein, but I can safely claim a better understanding of environmental health and epigenetics than Professor Berstein. I have also conducted a Google query of how racial and ethnic differences impact vaccine uptake. The reason why a larger subset of the population is needed is because in the past vaccines, such as as the flu vaccine, were more effective in some groups versus others. Those variations in uptake have not been fully investigated. To make sure the vaccines work well across broader groups of Caucasians, it is essential to test the vaccine across diverse racial and ethnic groups. That would mean the delay occurs not only so that diverse racial and ethnic groups have access, but that Caucasians also have a vaccine that is MORE effective for them. Please don't fault diversity for trying to give white people a better vaccine. Don't make diversity the excuse as to why one encountered a delay or received less vaccines - by one week. The entire year, week after week, day after day has been death and devastation. The same way science was avoided in responding to the pandemic, science should also not be ignored in recovering from the pandemic.

Racial and ethnic differences in vaccination levels narrow when adjusting for socioeconomic factors analyzed in this survey, but are not eliminated, suggesting that other factors that associated with vaccination disparities were not measured by the NHIS and could also contribute to the differences in coverage. Additional efforts including systems changes to ensure routine assessment and recommendations for needed vaccination among adults for all racial/ethnic groups are essential for improving vaccine coverage.

Another reason to develop a broader subset of diverse test groups for the vaccine test sample is because of the overrepresentation of people of color among frontline workers, both healthcare personnel and essential workers. These are the people who will have highest contact rates with the subset of the population, which is out and about, so it would make sense to inoculate them and make sure such inoculation is effective. 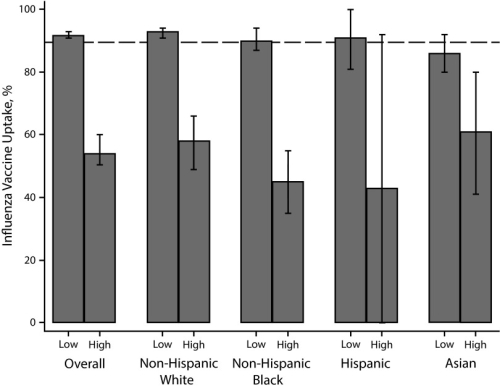 The researchers concluded the difficulty in analyzing a small subset of the population of health care workers (HCW), because the group is isolated and cannot provide "an inadequate sociocultural perspective for understanding barriers to vaccination." The normative response to these findings would be not to ignore the racial and ethnic disparities in vaccine uptake, but to understand the causes and investigate them further. Dr. Ojha and his colleagues found that "Multilevel perspectives such as the socioecological model of health promotion recognize that individuals cluster in social networks and that social networks cluster in communities." They noted:

Then the question becomes, " Is it fair to prioritize racial minorities?" This question is where lawyers can weigh in, but only after reviewing some level of scientific and medical literature. In October 2020, Harold Schmidt, PhD, Lawrence O. Gostin, JD, and Michelle A. Williams, addressed this as a viewpoint in the Journal of American Medical Association (JAMA). They considered if it was lawful and ethnical to prioritize racial minorities for the COVid-19 vaccines. They write:

The United States is experiencing an intense reckoning with structural racism, both because of the disparate health effects of COVID-19 on racial minorities and protests over police violence. Vaccine allocation strategies should not exacerbate racial divisions yet must consider socioeconomic and racial disadvantage. Protected litigation challenging vaccine allocation plans could disrupt the implementation of a COVID-19 vaccination plan. Before implementation, ACIP should model the performance of the [Social Vulnerability Index (SVI)] against racially neutral standards such as the [Area Deprivation Index (ADI)], in capturing vulnerable groups while minimizing legal and ethical risks.

Policy makers should also model how many more vaccines worse-off racial minorities should receive. [ National Academies of Sciences, Engineering, and Medicine] suggests that 10% of all vaccines be reserved for the worst-off SVI quartile in each state. In addition, states should make “special efforts” to deliver vaccines to these areas. The more intense the priority that might be given to racial minorities, the deeper the legal scrutiny will be. In addition, a seemingly arbitrary arithmetic cutoff point can invite further legal concern. An equally pragmatic yet more meaningful approach would consider COVID-19’s effects to date (for example, in terms of deaths an ADI region incurred) on worse-off racial minorities. Grounding priority decisions in objective data help justify allocation formulas both for the general public and for the judiciary.

Public health agencies will have considerable discretion in rationing scarce COVID-19 vaccines. They could become agents of change toward improving social and racial justice. Or they can become complicit in allocation strategies that, once again, disproportionately favor the better-off, White majority. Racially neutral approaches must be implemented to advance social and racial justice in the United States.

Google may be evil, but it can still be your friend.