What If "Defunding the Police" Makes Policing Worse? (by Prof. Elizabeth Joh) 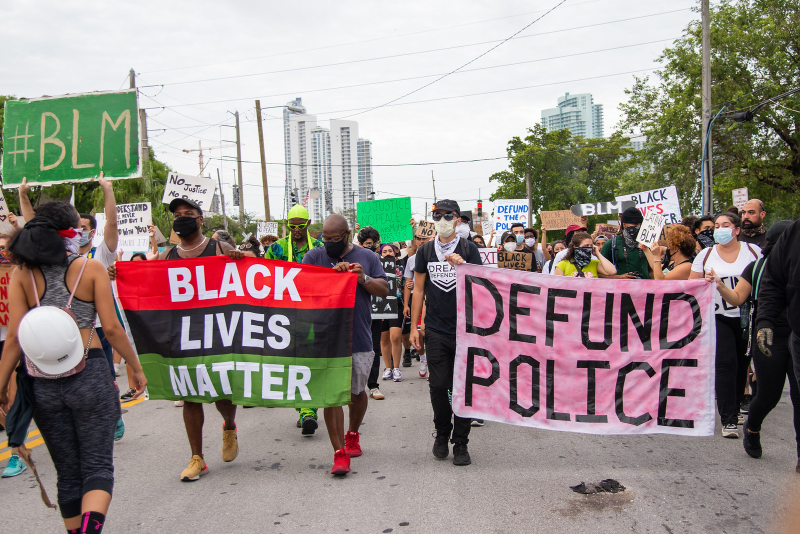 For eight minutes and forty-six seconds, Derek Chauvin pinned George Floyd’s neck to the ground outside of the Minneapolis Cup Foods on Chicago Avenue. Floyd’s shocking death, captured on a bystander’s cellphone video, led to criminal charges against Chauvin and the three other officers involved in the arrest. Floyd’s death also catalyzed thousands of protests around the United States and the world, and to the rallying cry of “defund the police.” These three words are memorable, but what do they mean? It depends whom you ask. For some, “defund the police” means reallocating some of the non-criminal duties that have become the responsibility of the police–think of outreach to the homeless and the mentally ill–to other non-police community service providers. For others, it is less a literal command and more a call to reimagine the objectives of street policing. And for some, it is indeed about police abolition.

But if we take these calls seriously and literally, they aim to reduce police department budgets as a method of reform. Unlike close analyses of the Fourth Amendment or legislative responses, police budgets usually escape the attention of legal scholarship. But in Police Funding, Stephen Rushin and Roger Michalski have presciently raised this issue as a topic of serious study. Police reform advocates calling for “defunding the police” should pay attention to the important observations the authors raise in their timely article. And one of the article’s central arguments is especially relevant after George Floyd’s death: that adequate funding should be seen as a prerequisite for accountable, democratic, and professional policing.

One commonplace among students of policing is that there is no single entity called “the police.” We live instead in a nation of more than 18,000 distinct law enforcement agencies. As a collection of departments, they are unified by a professional culture and bound by decisions of the United States Supreme Court, but the uniformity ends roughly there. American policing is local. Like public schools, American police departments rely most heavily on local sales and property taxes for funding, with some state and federal funding as well.

This means that the funding of American police departments, like schools, varies enormously. So much so, that, as the authors emphasize from their review of the data, there is massive inequality in police funding. For many Americans, the idea of the police may conjure up large urban departments in New York, Los Angeles, and Chicago, but these are hardly representative. What does this mean in practice? While some police officers have access to the latest technology, receive regular training, and are subjected to accountability mechanisms, others are not. The result? Funding differences mean that, depending on where you live, we may receive drastically different levels of police services. Some departments must hire part-time officers, can’t attract qualified entry level candidates, and can’t fire problem officers—all because of funding problems. These departments can hardly staff their departments, let alone address issues of excessive force and racial discrimination.

By mining several national datasets, Rushin and Michalski also provide crucial context to some of the central tenets of the defunding movement. Consider the claim that cities spend too much on policing as compared to other social services. Oakland, California spends about forty-one percent of its general fund on policing, compared to New York, which spends under ten percent on its police. But this comparison obscures the fact that New York collects far more tax revenue; Oakland far less. Both cities spend about the same amount of money per capita on policing services. Less overall revenue means cities suffer in all kinds of ways. Places like Flint, Michigan suffer tainted water, an understaffed police department, and soaring crime.

The nuanced perspective the authors provide in Police Funding means that taking “defunding the police” seriously as a policy proposal may backfire for cities that already struggle to fund adequate police services. No serious student of policing suggests that the police can simply be eliminated. If that is true, then accountability, transparency, and reform cost money (as well as require relentless scrutiny and review). A review of DOJ reports on troubled police departments pursuant to its authority under 42 U.S.C. § 14141 reveals a consistent theme: their recommendations for constitutional and democratic policing require increased financial investment.

And as Rushin and Michalski point out, reducing police funding in many departments around the country may result in worse, not better, policing. They hypothesize that reducing funding may exacerbate police misconduct. Can you think of a profession that has been improved by reducing costs for hiring, training, and oversight? Reducing the funding of the Robbins, Illinois police department may do little to address the problem of the part-time officer, paid 10 dollars an hour, who shot a 13 year old in the back. Instead, the authors propose a different framework altogether: think of policing as a problem of resource inequality. If policing is a public good, then states can take a lead by distributing police funds more equally, as well as require that some portion of these funds be reserved for training and accountability.

To be sure, Police Funding provides no direct solutions to the problems of excessive force, racial bias, overenforcement, and qualified immunity in American policing. The protests prompted by George Floyd’s death will require comprehensive, detailed reforms that demand the sustained attention of lawmakers. Yet the central premise of Rushin and Michalski is right: we should be skeptical of defunding the police—taken literally—as a serious policy proposal. Adequate police funding is a necessary condition for a path forward.

This piece was originally published at JOTWELL Criminal Law on 11/13/20. Read it here. You can find JOTWELL's creative commons licensing agreement here.

Prof. Elizabeth Joh is the Martin Luther King Jr. Professor of Law at University of California Davis School of Law.