The Elite are Not Anti-Racist, and Yet They Teach at America's Top Law Schools

As law schools wrestle with defining their role in a national anti-racism movement, few seem to be focused on the incestuous, elitist model of faculty hiring prevalent at most top law schools.  For if an institution is serious about having its law professors incorporate the role of race, gender, disability, sexual orientation and other subordinated identities into legal education, then it would behoove law schools to hire faculty who both value this pedagogical goal and collectively possess the diverse life experiences to shatter the rigid, elitist intellectual frame through which most American law students are taught.

But as Eric Segal and Adam Feldman warn in The Elite Teaching the Elite: Who Gets Hired by the Top Law Schools?:

A reader may read their article and ask: “Is it important that the twenty-five top-ranked schools hire eighty percent of their faculty from the Top Ten-ranked schools?” to which Professors Segal and Feldman have a persuasive response—if a law school is committed to exposing students to the diverse experiences of their prospective clients including racial and religious minorities, indigent people, immigrants, and other groups who are not proportionately represented among America’s elites.

"We think it is. By limiting their hiring to the most elite schools (and just two, Harvard and Yale, account for more than fifty percent of all faculty in these schools with U.S. law degrees), these schools limit the range of pedagogical choices they adopt and provide for their students. There are many ways to teach law and set priorities for law students. The top-ranked schools do not have a monopoly on the best legal education methods. Moreover, for better or worse, how these schools teach future lawyers has a great impact on the other 165 or so accredited law schools, but the law school experiences of their faculties are mostly limited to ten law schools. This inbreeding stunts creativity, experimentation, and growth, and might even prioritize the theoretical over the practical to the detriment of the legal profession. Moreover, since law schools do not teach law students how to teach, professors at Top Ten-ranked schools have only their shared experiences to rely on, which likely makes it difficult to improve how they teach their students." 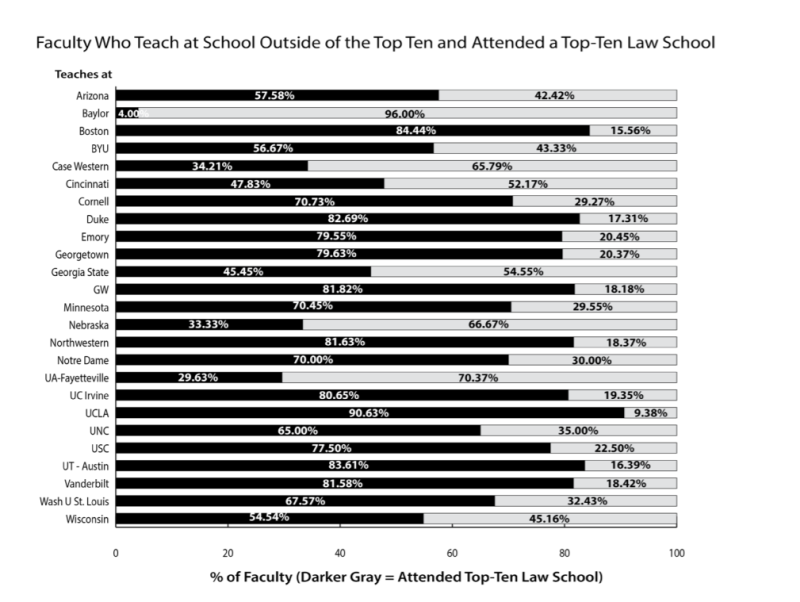 Some readers may rightly respond that law schools deserve praise for the changes in student populations over the past four decades.  Approximately fifty-three percent of American law students are women,  thirteen percent are Hispanic (nearly double the numbers from 1999), eight percent are Black and six percent Asian.  Assuming these changes are based on law schools’ intentional recruiting strategies, as opposed to changes in the American population and external market pressures, such changes are noteworthy.

However, most law students in the highest ranked law schools are from upper middle-class and wealthy families which again limits access to law schools, and by extension law school teaching, to the elite.

Segal and Feldman provide one explanation.

“The LSAT also results in a huge class bias. An article in The Atlantic put this sad but true statement in its title: “How the LSAT Destroys Socioeconomic Diversity.” To do well on the LSAT, preparation classes are extremely important, and their average cost for in-person sessions is $1300. According to this article:

“While law schools are steadily becoming more racially and ethnically diverse, they remain overwhelmingly upper-middle class. Only 5 percent of students at elite law schools come from families that fall in the bottom half of the socioeconomic spectrum—a number that has hardly changed since the 1960s. The Logic Games section [of the LSAT] contributes to this lack of socioeconomic diversity. If you can’t afford to adequately prepare, it’s a lot harder to earn the LSAT score you need to get into a Top 14 school. The vast majority—180—of the 200 accredited U.S. law schools can’t find jobs for 80 percent of their graduates. That means that a low score on Logic Games might stop you from becoming a lawyer.”

As hiring committees and deans conduct their annual hiring searches and law faculties vote on the finalists, they should be honest about how their decisions affect the ways in which law is taught in their schools.  Do they want professors whose life, education, and professional experiences reflect a narrow spectrum that comes with being members of the privileged elite or do they want a faculty that reflects the breadth of life and education experiences that defines the world’s most diverse society.

Do law faculty and administrators want to produce lawyers whose exposure to law is limited to the narrow analytical frames of America’s elites or do they want to see the law from the viewpoint of professors who know what it is like—either through personal experiences or representation of clients—to suffer the hardships of poverty, sexism, racism, xenophobia, and other forms of subordination not infrequently perpetuated by the law?

If the answer is that such factors shouldn’t matter in hiring decision, then law schools have a long way to go before they can overcome their myopic approach to teaching America’s lawyers, prosecutors, judges, and elected officials—many of whom actively contribute to the very circumstances that have triggered today’s anti-racism movement.

-- Eric J. Segall and Adam Feldman’s article The Elite Teaching the Elite: Who Gets Hired by the Top Law Schools? was published in Spring 2019 in the Journal of Legal Education. It can be downloaded here.