The Law and Order President and His Federal, Political Power Grab (by Prof. Ediberto Roman) 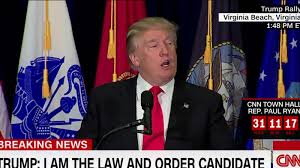 In an unprecedented edict during the civil strife aimed to end the epidemic of police brutality, President Trump on Monday evening declared himself “the law and order president,” and promised to unleash the United States military against U.S. citizens in order to stop “professional anarchists, violent mobs, arsonists, looters, criminals, rioters, Antifa, and others.”

At first blush, an effort by the president to end civil unrest seems reasonable, especially in a time of strife. One problem: President Trump does not have the sweeping power he suggests. While he could deploy the national guard in the District of Columbia, because it is not a state, without special authorization, he does not have absolute power to do so across the country. Specifically, the Posse Comitatus Act outlaws the use of U.S. Military to execute the law domestically unless expressly authorized by the Constitution or an act of Congress. The 1807 Insurrection Actprovides one such congressional permission. However, the Insurrection Act does not give, or ever has been used to give a president complete discretion with sweeping power over the entire nation. When used, it has been for geographically isolated occurrences. Specifically, it was used in the 1957 effort to halt obstructions to enrollment and attendance at public schools in the Little Rock, Arkansas School District; and in 1962 and 1963 federal troops were sent to Mississippi and Alabama to enforce constitutionally protected civil rights threatened by reactions to desegregation.

There are three narrowly tailored bases for empowering the president under the Insurrection Act. First is Section 331 which allows the president to act “upon the request of its legislature or of its governor.” In this instance, no state has thus far made such a request. Second, Section 332 allows the president to “suppress a rebellion” where unlawful obstructions, combinations or assemblages, or rebellion against the authority of the United States make it impracticable to enforce the laws of the United States. There is no indication that the protests here are making it impractical to enforce any law of the United States. It is thus likely, and a stretch for President Trump’s authority to derive from Section 332.

The final basis for Trump’s power grab would derive from Section 333, which is admittedly the broadest provision of the Act, allowing a president to thwart,

any insurrection, domestic violence, unlawful combination, or conspiracy, if it- (1) so hinders the execution of the laws of that State, and of the United States within the State, that any part or class of its people is deprived of a right, privilege, immunity, or protection named in the Constitution and secured by law, and the constituted authorities of that State are unable, fail, or refuse to protect that right, privilege, or immunity, or to give that protection; or (2) opposes or obstructs the execution of the laws of the United States or impedes the course of justice under those laws.

While Section 333 is indeed broad, it is aimed to stop a debilitating insurrection that prevents a state from functioning. The recent protests in several states have caused property damage and there has been a handful of human causalities, the protests have not hindered the execution of any laws within any state. It is one thing to second-guess a state official’s handling of the protests, it is entirely another thing to suggest any state has been stopped from executing its laws. It is simply a terribly dangerous precedent to use Section 333’s “any unlawful combination or conspiracy” language to allow a president at his or her whim to interfere with states’ rights and upend every notion of state authority, i.e., federalism.

President Trump may want to be the arbiter of when rights are violated (the irony is not lost here). However, to allow a tortured reading of a 200-year-old statute to allow such unfettered sweeping power to supersede state authority, would allow a president to resemble a monarch or dictator, and not a leader of a system with checks and balances.

This was originally published at the The Faculty Lounge on June 7, 2020. Read it here.

Ediberto Roman is a Professor of Law at Florida International University School of Law.