Black Panther, Boyz in the Hood, and the Power of Imagination in Black Life 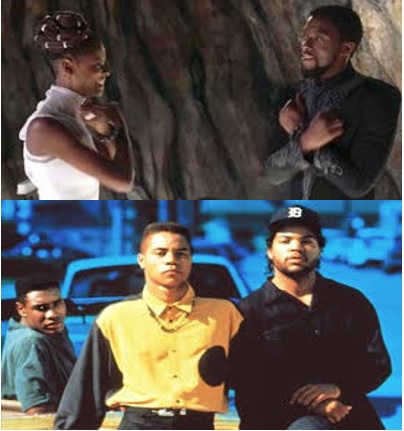 Like nearly every other person of color that viewed "Black Panther," I left the theater mesmerized.  While the movie's all-Black cast makes it a unique Hollywood offering, its depiction of Blackness is even more striking.

From the beginning of cinema, depictions of Blackness have been largely negative.  One of Hollywood’s earliest blockbusters, “Birth of a Nation,” depicted Black people as stupid, lazy, lascivious monsters intent on destroying white society.  In later years, Hollywood depictions broadened to include roles such as the docile slave (“Gone with the Wind”), the simple buffoon (the ‘Stepin Fetchit’ films, “Amos ‘n’ Andy”), the sassy domestic (“Beulah”), and other negative portrayals.

The Civil Rights Movement ushered in an era of more positive representations.  For the first time, African Americans were portrayed as educated professionals (“I Spy,” “Julia,” “A Raisin in the Sun,” “Who’s Coming to Dinner,” - any movie starring Sidney Poitier, really) capable of holding their own with whites.

In the 1970s, blaxploitation films such as “Superfly,” “The Mack,” and others presented an alternative view of Blackness that emphasized sexuality and criminality.  Though this movement briefly waned, in the 1990s, films such as “Boyz n the Hood,” “New Jack City,” “Menace to Society,” and others also explored drug culture and crime.  Though each of these films had strong anti-drug, anti-crime messages, for some, the takeaway was that these films were a realistic depiction of Black life.

To be sure, many African-Americans bristle at negative media portrayals because they fear – and somewhat justifiably so – that these films will negatively influence how whites view us.  But, this argument is problematic for several reasons.  Not only does this argument absolve whites of the responsibility to befriend actual Black people rather than celluloid substitutes, but it is also frequently used as a convenient excuse to engage in respectability politics.  But the largest, glaring flaw in this argument is that it ignores how labelling certain depictions of Blackness “realistic” limits the Black imagination.

The wonderful thing about "Black Panther" is that it challenges Black viewers to see themselves in a different light.  Wakanda is a peaceful, technologically advanced nation with a populace that lives together in harmony.  Yes, it is fictional.  No kingdom with the qualities of Wakanda exists – not in Africa, not in Europe, and not in North America.  But that doesn’t mean we shouldn’t try to get as close to Wakanda as we can.

I came of age in the “New Jack City” era.  While the movies of that era were not my reality, they did accurately depict the reality of any number of African-Americans.    But when reality is so bleak, why must we double-down on it?  If we can’t imagine beyond reality, how can we ever hope to transcend it?

The value of “Black Panther” and other films that portray Blackness and Africanness in a positive light is that they allow African Americans to see ourselves in a different light.  By altering perceptions, they stretch the Black imagination.  Energized imaginations are then able to conceive a brighter, Blacker future.

It would be silly to argue that the reality of Black life as it is should never be portrayed.  Every Black movie need not be set in Wakanda to be meaningful.  However, “Black Panther” proves that while paying homage to our reality is important, imagining our future is equally so.

Hopefully, “Black Panther” will usher in a new era of creativity that stretches the limits of Blackness in cinema and beyond.