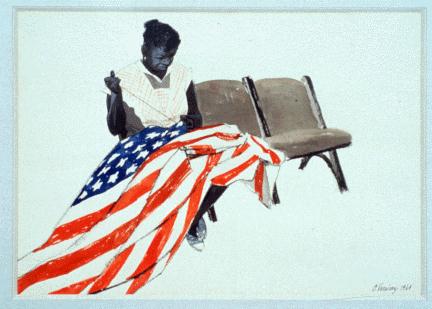 I have never liked the Fourth of July.  As a child, sparklers and fireworks terrified me.  As I grew older, the more I learned more about America’s complicated history with people that look like me, the less likely I became to wave Old Glory.

But this year, I had a realization.

The problem with Fourth of July is not patriotism, but rather that patriotism has been too narrowly defined.  For far too many Americans, patriotism means unquestioning, automatic praise of America.  Criticizing America’s past or present is tantamount to treason. But this need not be the case.  The Oxford English Dictionary says that a patriot is one “who vigorously supports their country and is prepared to defend it against enemies or detractors.”

When most think of America’s enemies, they think of those from foreign lands that would harm Americans.  But we must beware of all enemies, whether foreign or domestic.  A man who advocates a freedom of religion that applies to some, but not all, has surely harmed Americans and done violence to the First Amendment.  A man who has shown nothing but contempt for our cherished freedom of the press is surely no friend to the nation or its constitution.  A man who delights in his refusal to vigorously protect our redwood forests, Gulf stream waters, and beautiful, spacious skies surely cannot love America.  A man who advocates sentencing millions of Americans to ill health – and perhaps even death - by denying them health care is no friend to those Americans.

If you truly love something, you want to protect everyone and everything in it.  A person who is actively working to harm Americans and American institutions can only be considered an enemy to America.

No one has done more to defend this nation against its greatest domestic enemy in recent memory, Donald Trump, than Black women.

Please do not misunderstand.  Black women are not the only patriots in America right now.  There are Black men, white women, Latinos, Arabs, Asians, and many others who are standing against Trump.  However, as a group, Black women have been the most vigorous in their opposition and need to be recognized for this loyalty to their country.

Black women did everything possible to stop Trump from taking office.  A staggering ninety-four percent of Black women voted for Hillary Clinton.  By contrast, sixty-two percent of white men voted for a man who ran a horribly racist campaign and promised to violate the Constitutional rights of their fellow citizens. 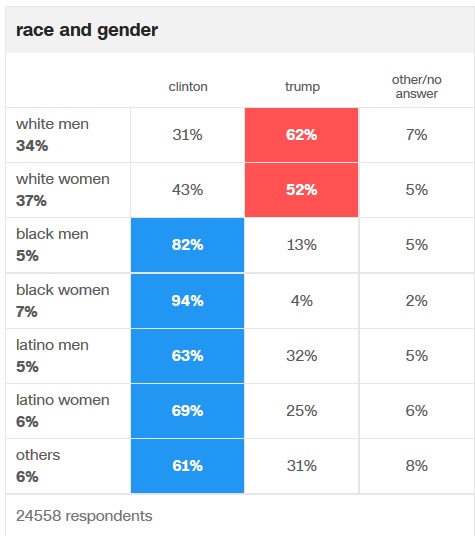 One could argue that some GOP voters mistakenly believed that Trump was simply making brash campaign promises.   But now, almost six months in, we can clearly see the damage Trump is doing at home and abroad.  Despite this knowledge, post election,  58 percent of white men continue to support him.  Meanwhile, just 14 percent of Black women approved, the lowest of any group in the survey.

It’s ironic that Trump supporters claim to love America, but praise a man actively working to harm large groups of Americans.  It seems, then, that Trump voters only love parts of America.  But Black women have shown a more expansive love.  We love America even though, after enduring centuries of both racism of sexism, we likely have more reason to hate America than any other group.  We endured the same chattel slavery, Klan violence, and Jim Crow segregation as Black men while suffering the same gender indignities as white women.  Yet, we continue to do what is best for America.  Like Sojourner Truth, Harriet Tubman, Rosa Parks, and many less famous women, we show America her flaws and even help her to fix them.  We continue to lift her up, push her forward, and help her be a better version of herself even when we are rebuked at every turn.

If that isn’t patriotism, I don’t know what is.

If all Americans adopted the expansive vision of patriotism adopted by Black women and their allies, we would have a government that cared for children, women, the poor, the elderly, the LGBT community, Muslims, Jews, atheists, and all other non-male, non-straight, non-WASP segments of our nation instead of a government devoted to inventing new ways to exclude and dismiss their fellow Americans.

In short, the view of patriotism adopted by Black women would move us ever closer to achieving the goal of a nation with liberty and justice for all.

Next year, I think I’ll buy a pack of sparklers.