Racism in the Credit Card Industry

A new article by Professor Andrea Freeman examines how credit card companies exploit the economic necessity of owning a credit card to engage in discriminatory and predatory practices against Black and Latino customers.

The following is a summary of the article:

“In a social and financial climate characterized by deep racial and socioeconomic divide, racism against credit card applicants and consumers is a core piece of the systemic inequality that perpetuates dramatic disparities in wealth, employment, health, and education. Over several decades, credit cards have evolved into an essential tool for lower- and middle-class families to maintain financial stability through strategic balancing between debt and disposable income. Now, without a credit card, many households cannot manage to meet the basic needs of their families. Credit card companies take advantage of this reality, imposing exploitative fees, interest rates, and other conditions on consumers who have no choice but to use the companies’ products. Even worse, the companies do so in a racially discriminatory way, burdening Black and Latino customers with the worst credit card terms, often unrelated to credit risk. This type of consumer racism dates back to the Reconstruction era and reflects an unbroken chain of laws and policies cementing racial economic inequality. Social norms and stereotypes make the resulting inequality appear cultural and personal instead of systemic and structural.  This Article is the first to apply a critical race theory analysis to the problem of racism against credit card consumers. After describing the role that history and stereotyping play in allowing credit card corporations to discriminate against consumers, it identifies fatal flaws in the two laws designed to address racial discrimination and inequality in credit, the Equal Credit Opportunity Act and the Community Reinvestment Act. It then proposes amendments to the Consumer Accountability Responsibility and Disclosure Act based on rehabilitative reparations theory and slavery disclosure laws that would require credit card companies to make significant investments into the communities they harm.”

The full article can be downloaded here. 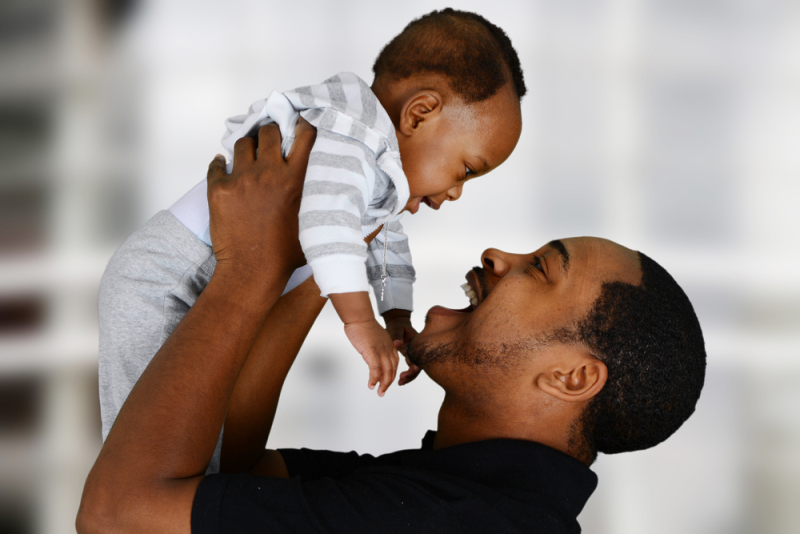 Father’s Day is a time to celebrate the special men in our lives who furnish us with bad jokes and good advice.  But in the Black community, Father’s Day has become a time fret about the impact that fatherlessness is having on our community.

I am so tired of people – and by people, I mean Black conservatives, White conservatives, well-meaning White liberals, “concerned” Black men, and anyone else – blaming fatherlessness for all that is wrong in the Black community.

The fatherlessness narrative isn’t fully rooted in reality.  It is true that just over seventy percent of African American children are born to unmarried parents.  However, when cohabitating parents, stepfathers, and other living arrangements are considered, the number of Black children living without a father drops to about fifty percent.  While this number may seem high, non-custodial Black fathers spend more time with their children than fathers of other races.   So, the number of Black children who are truly fatherless is much lower than reported.

The fatherlessness argument also ignores the Black family structure.  Traditionally, our families have been intergenerational and have leaned on one another for support.  If a child is truly fatherless, it is likely that there is a grandfather, uncle, or cousin willing to provide care and support.  The absence of a father does not necessarily mean a complete absence of male guidance.

The fatherlessness argument is also a subtle way to blame Black women for the plight of the Black community.  This may seem counterintuitive, but it is a short jump from “there are no fathers” to “these women are failing at raising our youth.”  Even more troubling, the not-so-subtle implication of the fatherlessness argument is that if Black men somehow returned to their “rightful” place in the family, the problems facing the Black community would immediately disappear.  This logic is extremely insulting to Black women.  Black women have been the backbone of our race for centuries.  Though we rarely get credit for it, we have been at the forefront of every movement to uplift our race from abolition to Black Lives Matter.   To argue – even indirectly – that Black women are the reason the race is failing is a grave insult.

For those that doubt the role of racism, I offer two points in support.

In 1960, roughly two-thirds of Black children lived in two parent homes – almost the exact inverse of today’s statistics.  Also in 1960, African Americans could not vote, could not stay in certain hotels or restaurants, and could not move into certain neighborhoods.  Our high marriage rates did not translate into political rights.  Do those touting fatherlessness as the cure-all truly believe that if every black child came from a married home that we would never again hear about police officers shooting an unarmed black child or chocking a suspect until he yells, “I can’t breathe?”  I doubt that this is the case.

Second, the percentage of Latino children living in two-parent homes is about double that of African American children.   Yet, the number of Latino children in poverty is only slightly lower than that of African Americans.  If marriage was a social silver bullet, shouldn’t Latinos have a lower poverty rate?   Moreover, why is it that married Black and Latino couples have half the wealth of white single parents?   Perhaps the structural racism that affects people of color is the real culprit after all.

This Father’s Day, the Black community should celebrate all fathers and father-figures in our lives.  Our time would be better spent buying hideous ties than worrying about how “fatherlessness” is destroying our community.

Monday, June 12, 2017 marks the 50th anniversary of the Loving v. Virginia, the Supreme Court decision which invalidated interracial marriage bans in the United States. Recently, the Pew Research Center reported that since the 1967 Loving decision the rate of intermarriage has increased more than five fold, from 3% of newlyweds who were intermarried to 17% in 2015. In recognition of this increase, “Loving Day” annual events celebrate the court decision. Primarily organized by multiracial persons as social events, communities across the nation gather on Loving Day to celebrate the existence of multiracial families. The celebrations are part of a larger campaign to have the federal government create an official Loving Day federal holiday.

No other Supreme Court case, let alone a civil rights case, has its own designated federal holiday. However entire multiracial community websites are dedicated to lobbying the government for a Loving Day holiday. This is because much more is at stake for these activists than commemorating a legal case. Validating mixed-race families and in particular multiracial persons, is the fundamental aim of the Loving Day federal holiday campaign. However, the rhetoric of mixed-race racial distinctiveness used by the campaign has begun to be drawn into judicial questioning of racial integration policies in ways that counter Loving Day celebrations of diversity.

Absent a multiracial census category, a federal Loving Day holiday can be viewed as an alternative route to official public recognition of a presumably racially distinctive population. While it is certainly laudable to demand respect for however individuals choose to personally identify themselves, the public discourse of distinctiveness that accompanies much of the lobbying for federal recognition relies upon the trope of being a new people with distinctive racial problems. Yet, in my own examination of discrimination cases filed by multiracial claimants I find that the racism they describe is very much part of the historic disparagement of non-whiteness in any form, rather than a new “mixed-race” mode of discrimination.

Nevertheless rhetoric has consequences. United States Supreme Court litigation has begun to associate the growth of a distinctive multiracial identity with the obsolescence of civil rights policies. Particularly worrisome has been the judicial suggestion that the growth of multiracial identity undercuts the legitimacy of affirmative action policies that have long sought to pursue racial equality. Supreme Court Chief Justice Roberts directly posed questions regarding the implication of mixed-race candidates for affirmative action programs, when the University of Texas’ consideration of race in its affirmative action plan was challenged in 2013.

In Fisher v. Texas (Fisher I) the Court affirmed the process of considering race as a factor among others in a public university’s admission efforts to achieve a more diverse student body. But the Court also narrowed the ability to use affirmative action by stating that in the judicial assessment of whether a particular admission policy satisfies the strict scrutiny standard of being narrowly tailored in pursuit of the goal of diversity, the university is not entitled to deference or a presumption of good faith in its operation of their programs.  Justice Roberts questioned how compelling the university pursuit of a diverse student body could be if a candidate who was “one-quarter Hispanic” or “one-eighth Hispanic” is allowed to identify on the admissions application as Hispanic. For Justice Roberts, mixed-race applicants are a cause for generating skepticism about the integrity and ability of affirmative action to truly achieve racial diversity.

Nor is this skepticism limited to Justice Roberts. When the Supreme Court re-examined the University of Texas affirmative action policy three years later in Fisher II, Justices Alito, Roberts and Thomas opined that the affirmative action program was faulty because “as racial and ethnic prejudice recedes, more and more students will have parents (or grandparents) who fall into more than one of UT’s five [enumerated racial] groups.” Such judicial weaponizing of multiracial personal identity to undermine the pursuit of racial justice is a perversion of Loving Day celebrations of racial diversity.

One possible antidote to the misappropriation of multiracial identity is for Loving Day celebrations to focus upon what was the ultimate civil rights objective of the Loving v. Virginia decision – the impermissible pursuit of what the Supreme Court there termed “White Supremacy.” This is because interracial bans only prohibited interracial marriage involving white persons. Fifty years later, after the Loving v. Virginia decision, interracial marriage bans no longer exist, but White Supremacist violence and rhetoric still flourish. Whether or not Loving Day ever becomes an official federal holiday, it is to be hoped that its celebrations will specifically commemorate the decision’s fundamental civil rights concern with racial hierarchy.

Tanya Katerí Hernández is a Professor of Law at Fordham University School of Law and the author of the forthcoming book from NYU Press, “Multiracials and Civil Rights: Are Mixed-Race Stories of Discrimination a New Kind of Multiracial Racism.”

Professor David Leonard of Washington State University has just come out with a book entitled PLAYING WHILE WHITE: PRIVILEGE AND POWER ON AND OFF THE FIELD.  In different but related ways, race and sports are two of American's biggest obsessions.  The two intersect frequently, because of the racial demographics of participation in various sports; the prevalent racial stereotypes surrounding athletic performance, mental abilities, and masculinity/femininity; the power dynamics involved in athletic competition on and off the field; and many other factors.  Although sports can sometimes be a venue where racial divisions are transcended, they are equally or more often reflective of the racial hierarchies that pervade American society.  Professor Leonard delves into the ubiquity of White privilege in the sports arena, showing how White athletes are often treated more favorably than Black athletes in similar situations.  He uses examples from a variety of professional sports and critically examines the discourse on athletic competition, highlighting its subtle racial inequities.