On Respectability, the Dallas Shootings, #BlackLivesMatter, and Reasoned Discourse

A lot has gone on this week. There is a lot to say about the police shootings of Anton Sterling and Philando Castile, the mass shooting of five Dallas Police Department officers, and the ongoing debate about race, abusive police practices, and their impact on society. There is too much to say in one blog post given the fact that many are hurting and suffering because of the present violence of this week. More will come on these topics.

But I do want to address two matters here today. This moment in the dialogue around race relations has brought scrutiny on the #BlackLivesMatter movement. Both publicly and in the context of law school education, there are those who have sought to answer the accusation that the #BLM movement is to blame for the problems it seeks to answer. I will discuss two separate but interrelated spaces in which these problems have occurred and share insight about one and a resource concerning the other.

First, there have been many who have sought to blame #BlackLivesMatter directly for the Dallas police shootings. As you  know, the Dallas shooting happened during a #BLM protest and the police were present to keep the peace. Some private and public figures used the opportunity to conflate the violence (apparently committed by a solo gunman not connected with #BLM) with the movement itself. (Indeed, the comments of Rep. Joe Walsh insunated that "this is now war" and that "real America would come for" #BLM and President Obama.)

This line of criticism of #BlackLivesMatter seeks to caricature the movement as reverse racist, anti-police, and corrosive to social order. Indeed, as we have discussed at length on the blog, these objections parallel the "respectability" objection to #BlackLivesMatter.

As I argued in the respectability symposium,

The modern-day respectability politics that [Professor] Kennedy and others advocate for fails to confront the underlying premise. They buy into the myths that Black people, or any subordinated people, should and must buy into white respectability in order to be accepted. And whether the standard-setter of such politics is liberal or conservative, or whether such performance of respectability serves an end of the right or the left, such politics deny agency and subtly reassert racial supremacist thinking.

Accordingly, during this moment of renewed heightened awareness of police violence against African Americans and anti-police vigilantism, there are those who seek to assert the respectability paradigm through shaming and threats against #BlackLivesMatters to force it to conform to an ideology of white supremacy and a reaffirmation of the carceral state. #BLM, President Obama, and all those who seek to critique abusive policing, ought to, in this thinking, keep their place.

Second, this kind of shaming of #BLM social activism is nothing new. Among many other places, it takes place in higher education, and in law schools in particular. Indeed, amid the posts that sought to blame #BlackLivesMatter for the Dallas shooting came a gem of a document that articulated answers to many of these complaints--a law professor's answer to students complaining that said professor wore a #BlackLivesMatter t-shirt to the law school.

This post, circulated anonymously two months contains a well-crafted set of answers to those who object to the movement and deconstructs the fallacies imbedded in many of those objections in the broader discourse around law schools and higher education--that law is objective and fixed, that the consumer model of education ought to reign out, and that the #BlackLivesMatter movement is inherently racist because of its focus on Black lives. 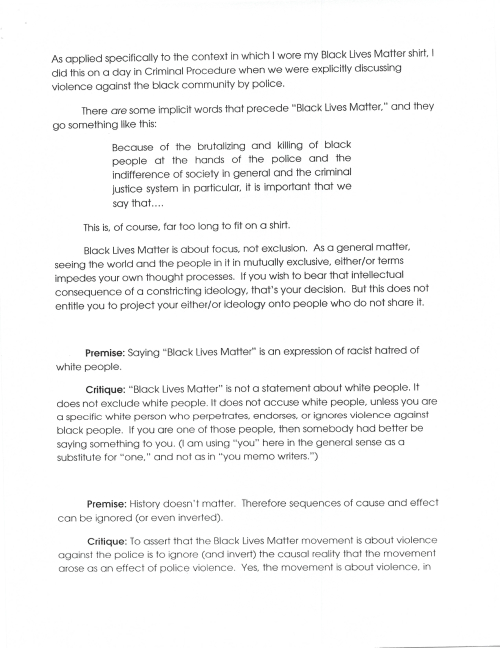 I found this an ingenious way of addressing the all-too-often intrusive objections that come with social activism within this neoliberal day and age. This document contains deep insights which can help sweep away misconceptions about the #BlackLivesMatter movement and effectively target the imbedded stereotype threats that buy into the white supremacist assumptions of respectability. And this document offers a model for all law profs who teach on race or other subjects that seek to confront subordination.