1 World Trade Center and the History of Skyscrapers 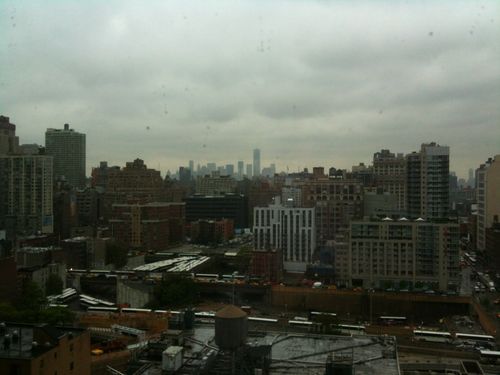 I visited New York City a few weeks ago and stayed in a hotel at 42nd and 10th.  My room looked south, so although the weather was hazy for most of my visit, I could observe the construction of 1 World Trade Center and (I think) 4 World Trade Center. 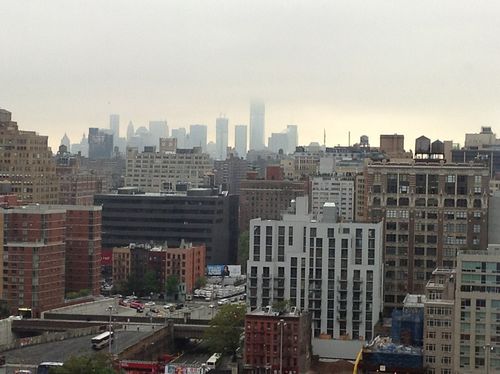 All of this is background to introducing a really interesting article in today's New York Times regarding the history of skyscrapers.  I love the Streetscapes column in the Times -- they do a wonderful job of blending the history of New York City real estate with present issues.  This article is no exception.  My favorite tidbit:

In 1897 The Record and Guide, alarmed by a proposal for a building 2,000 feet high, protested that New York was open “to attack from the audacious real estate owner” who cared nothing about robbing light from the neighbors, adding, “All that is needed is a barbarian with sufficient money and lunacy.”

The article discusses the historical animosity towards skyscrapers in New York, and the political battles regarding the land use restrictions that were put in place after the turn of the last century.  The article begins and ends with a description of the construction of 1 World Trade Center, concluding:

No one talks seriously about banning skyscrapers anymore; indeed congestion has been in recent decades praised, not derided. And so we have before us the prospect of a tower one-third of a mile high, that will be considered a monument of civic pride, a literal triumph out of tragedy. What people would have said in the 1880s and 1890s is barely a footnote.

But as a law professor, of course, I love footnotes. 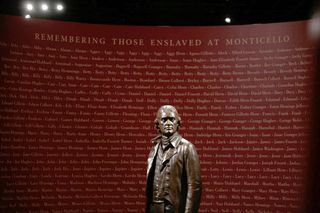 If you find yourself in our nation's capital (say, to attend the ALPS conference), consider visiting the Smithsonian Museum of American History to view the new exhibit "Slavery at Jefferson's Monticello:  Paradox of Liberty," which opens today.  It looks fascinating.  From the Washington Post review:

Standing outside of “Slavery at Jefferson’s Monticello: Paradox of Liberty,” the thematic tensions are clear. On one side of the entrance, an image of Jefferson is placed against the script of his most famous writing, the Declaration of Independence. On the other side is a reproduction of a page from Jefferson’s farm book, with slave names neatly listed.

The Strange, Utopian Quest for a Workable Bikeshare Program 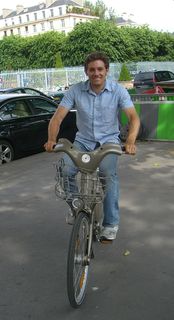 Two years ago the “Smartbike” program launched in Washington, D.C. (for the uninitiated, bikeshare programs offer free or low-cost access to community-owned bicycles for trips around a city).  By all accounts, Smartbike has been an unqualified disaster.  No one bothered to promote the program, only long-term memberships were offered (freezing out tourists), and there weren’t many places that a rider could pick-up or drop-off a bike.


Despite the total failure of Smartbike, D.C. is trying again; This week the D.C. Department of Transportation debuted Capital Bikeshare.  The new plan certainly seems like an improvement.  The city has heavily hyped the scheme (they’re on Facebook!), prospective users had input on the locations of the bike stations, and tourists will have access to bikes for 24-hour periods.

Despite these positive innovations, my Property-themed crystal ball indicates that Bikeshare will certainly falter.  Why?  No individual bears a significant portion of the costs if they damage a bicycle – a flat tire here, a bent rim there. Thus, users have little incentive to take care of the bikes or ride them in a safe and reasonable manner. This is classic Tragedy of the Commons territory.

It is commonplace now to see the bikes at docking station in Paris with flat tires, punctured wheels or missing baskets.  Some Velib's have been found hanging from lampposts, dumped in the Seine, used on the streets of Bucharest or resting in shipping containers on their way to North Africa. Some are simply appropriated and repainted.

The failure of the Bikresharing programs is not confined to France.  Other plans have had difficulty (financial or otherwise) in Melbourne, Portland, Stockholm, and Amsterdam.  If both theory and history show that these programs are duds, why do governments keep insisting on giving them a go?

(Picture:  The author, thoroughly enjoying a Velib ride before ditching his bike in the Seine)

For years I've read with interest Al Brophy's posts here at PropertyProf on monuments and their contested meanings, particularly with regard to the southern United States.

During my stint in the Czech Republic this summer, I got to see concrete examples (literally) of the contested meanings of monuments -- and the contested histories they represent.  Below are some photos I took (please forgive my awful photography) of monuments that coexist in Prague today, but that tell very different stories.

Here is a monument that stands near Hlavni Nadrazi, the main railway station in Prague. It memorializes the liberation of Prague, and much of the Czech Republic, by the Soviet Union in 1945.

The Soviet soldier is embracing a Czech partisan -- or perhaps more accurately, the Czech partisan is clinging to the neck of the Soviet soldier.  Many Czechs justifiably regarded the Soviets as their saviors.  For just one example, when the Soviet army arrived at the Terezin concentration camp, they immediately set up five field hospitals and saved countless victims from the genocidal pit the fascists had thrown them into.

One result of the gratitude many Czechs felt toward the Soviets was a rapid and genuine increase in the political support the Communist party found in the Czech population.  By 1948, the Communists were the largest single party in the the Czech parliament -- and shortly thereafter seized power completely, entering fully into the Soviet sphere.  Today in Prague, if you look carefully, you can still find monuments to the era of Soviet domination, celebrating the alliance -- although even that word would be controversial, since most Czechs would justifiably say the relationship was imposed by force, particularly following the 1968 Warsaw Pact invasion -- between the Czechs and the Soviets.

Here, for example, is a bas-relief plaque celebrating the cooperation between the Czechs and Soviets in the achievements of the Soviet space program.  It can be found in the Andel metro station in Prague.

But of course these monuments masked another story, one of oppression and terror and poverty.  Today in the Czech High Court in Prague, which was once a Gestapo headquarters, and where the Communists conducted Stalinist show trials for advocates of democracy like the executed Milada Horakova, and later-president Vaclav Havel, one can find a series of statues depicting a horrifying confrontation between a man and two wolves.  Ultimately the wolves are captured and impaled, but not until the man has suffered horrific (perhaps nearly fatal?) wounds himself.  (to emphasize my photographic skills, I accidentally included a mop in the picture).  What do these statues mean?  I don't know the intent of the sculptor, but to me they suggest the confrontation between justice, on the one hand, and fascist and communist totalitarianism, on the other.

And finally, before this post swamps the entire page, there is one of the most stunning monuments I have ever seen.  It is to the victims of communist rule in the Czech Republic.  It is actually six different statutes built into one staircase, emerging from a wood.  To me, it suggests man emerging from a history that has de-humanized him.  What does it suggest to you?  Regardless of how you interpret its specific meaning, to me it creates an almost overwhelming feeling of sorrow -- yes, for the specific victims of communism, but also for all of the people of central and eastern Europe, emerging from a century of almost unbelievable violence and horror, as their world tore itself apart.

What is most fascinating to me, even beyond the particular stories conveyed by these monuments, is that they coexist today in Prague.  We could interpret that as suggesting there is a contest over Czech history, and that would be accurate to some extent.  But I think the real meaning of their coexistence is that the Czechs have resisted, with integrity, a simple narrative of their history.  Good vs. evil is usually a fairytale.  The uncomfortable truth is that most historical moments contain both.  The Czechs have justifiably and unambiguously rejected communism, but as these monuments suggest by their coexistence, they have also rejected the fairytale of unambiguous history.

Happy New Years from Maui, where we're vacationing. Here's a photo from the beginning of a hike my daughter and I took yesterday. Our quest was to climb from Lahainaluna high school (founded in 1831, it's the oldest high school west of the Rocky Mountains) to Pa'upa'u, a mountain where a giant "L" is carved into the mountainside (for the high school).   Above the "L" is the grave of David Malo, a Hawaiian poet and historian who attended the high school during the 1830s. Malo's best known work is Hawaiian Antiquities, describing the ancient culture.  The book is also important because it's one of the earliest books written in the Hawaiian language.  Malo was one of the architects of the Hawaiian constitution and bill of rights.  He was critical of the increasing control of the white immigrants over Hawaii and asked to be buried in the West Maui mountains "above the tide of the foreign invasion."

Back to yesterday's outing.  Unfortunately we did not reach the "L" or the gravesite due to defects in our hiking guidebook, which had a sketchy map and an inadequate textual description of the route.  But we went through fine grasslands and forest (mainly eucalyptus) and enjoyed tremendous views of Lahania, the ocean, and the nearby island of Lanai before we retraced our steps to the high school.  As we were leaving, we met with a administrator from the high school.  He was irritated with the author of our guidebook for a different reason.  Before publication of the last edition, he had told the author that hikers going through the high school campus needed to get advance permission from the high school, but nothing to the effect made it into the book.  Much of Maui is privately owned, and there are fewer public access trails here than I had expected to find.  Many areas are posted "kapu" (no trespassing).  One of the way private landowners of natural Maui make money is to license "eco adventure" companies, who escort their customers on hikes through private lands to see waterfalls, etc, and charge ridiculous prices -- $80 to $120 for several hours; $140 to $180 for full day hikes.