When is it time to take down memorials?

Thought-provoking piece in the New York Times today about the discussions in Newtown, Conn. regarding the spontaneous and often homemade memorials to those who died at Sandy Hook.  The article mentions that many of the flags made from bedsheets, or signs made from plywood violate homeowner's association covenants, but they also violate sign ordinances, zoning, and other laws.  How long is long enough to allow these rules to be bent to allow people to mourn?

McLaughlin on the Creation and Acquisition of Conservation Easements

Robertson on Public Access to Private Land for Walking

Whether people have an independent right of access to walk on land they do not own is a question answered differently throughout the world, largely due to cultural, historical, and political variations amongst regions. In this decade, English citizens gained a legislated right to roam on privately owned land designated by the government for public access. The British government now designates land as access land by evaluating the nature of the land itself, not its ownership status. In Sweden, the right to roam on land owned by another has long been a deeply rooted cultural tradition, though not codified in law. Other countries have adopted variations of a right of access, while some, like the United States, continue largely to resist it, choosing instead to hold property owners’ right to exclude above a public right of access. This paper looks at some of the historical and cultural reasons countries have adopted, cherished, or rejected a public right of access to privately owned land. In particular, it focuses on the degree to which each culture values environmental and individual responsibility.

To do so, it considers the Scandinavian countries, with an emphasis on Sweden, where a public right of access is longstanding and cherished, and there is a corresponding deep respect for the environment and individual responsibility. It then considers England, which has moved decisively toward granting broader rights of access to certain types of land through legislation, grounding that expansion on the satisfaction of certain rules pertaining to environmental and individual responsibility. It also looks briefly at several countries in Europe,where environmental and individual responsibility, as well as other cultural factors, have supported expanded rights of access. Finally, it raises the question why the United States does not have, and will not likely achieve, a similar legislated or cultural right of access to private land for walking.

I saw Heidi give a version of this paper at ALPS and thought it was terrific.  I'm going to bring some of this research into my class this year.  In particular, I think her case study of Sweden provides a great counterpoint to the right to exclude cases in Dukeminier.

Jessica Owley (Buffalo) has posted Tribes as Conservation Easement Holders: Is a Partial Property Interest Better than None? (book chapter) on SSRN.  Here's the abstract:

Towns in the Floodway

In case you've been living in a cave for the last few months, it's been raining a lot in the middle of the country.  Here in Lexington, we've got lots of wet basements and leaky roofs; But along the Mississippi River, the consequences of too much water are far more serious.  In 1927, for example, the river flooded 27,000 square miles, displaced 600,000 people, killed 250, and caused $400 million in property damage.

As water levels of the Mississippi near record levels, the Army Corps of Engineers is taking steps to ensure that there isn't a repeat of 1927.  This weekend, the corp opened the Morganza Spillway for the first time in 40 years.  The Morgnaza is a huge flood control system that can divert water out of the Mississippi and away from New Orleans and Baton Rougue.  Unfortunately, the water has to go somewhere else.  The water that flows out of the Morganza will pour across farmland and destroy homes before heading into the Gulf of Mexico.

The property question is, what happens to the towns and farmland in the floodway?  Why can the government flood homes here to save property there?  Does the flooding caused by the Corp amount to a taking?

It seems that it does not.  According to Tulane University geographer Richard Campanella, the federal government purchased flow easements from the property owners in the 1950s that allows it to store water on the land. The Corp also sends residents yearly written notices to remind them of the possibility of opening the floodway.  Despite the threat of flooding, a number of folks took the calculated risk to invest in the flood plain.

For the past thirty years nonprofit organizations have revolutionized open space and habitat conservation in the United States through the use of conservation easements. Pursuant to legislation, nonprofits may now acquire and hold perpetual restrictions that prevent alteration of the subject land’s natural and ecological features. These rights can be held “in gross,” with the result that the nonprofit need not own land near the restricted property and can be based in a distant location.

This article will provide a framework of the major policy and legal issues that could, and in my view should, inform a country’s decision to adopt private conservation restrictions. These include considerations of cost, efficiency, preference for private vs. governmental actors, the benefits and costs of perpetual limits on land, public regulation of land as an alternative, the specter of neocolonialism in environmental controls, the nature and capacity of the country’s nonprofit sector, and the local legal system. Finally, the learning about conservation restrictions should be a two-way street, not just the export of American methods: the views of some other countries about governmental involvement in private conservation may teach valuable lessons to American jurisdictions about the need for an increased role of government and the public in certain aspects of the selection, modification, and termination of a some conservation easements.

What's In Your Yard?

Teaching the law of servitudes, and in particular the ubiquitous case of Van Sandt v. Royster, often brings both my students and myself to the startlingly abrupt realization that we have no idea what's buried in our yards -- although we know there must be pipes down there, we don't exactly where they are, or what kinds of pipe they are, or even who's supposed to be taking care of them.  That's an issue in Van Sandt because the court holds that a sewage pipe running through the plaintiff's yard -- which the plaintiff himself was unwittingly using -- created an implied easement, and that the plaintiff was on constructive notice about its existence when he purchased the property.

I think I can say with a high degree of confidence that most of us connected to municipal systems don't know exactly where our sewage goes during it's journey through our yards; we really only care that it goes away (permanently) when we flush.  Similarly, I don't know where the water that comes into my house comes from on its journey from the local tower; I only care that it arrives when I turn the faucet.  I also have no idea where, exactly, the natural gas that comes into my home travels through my yard or neighborhood  I know enough not to dig without calling the local utility company, but that's it.  And let me add -- I practiced utility law.

The horrific fire in San Bruno reminded me again how little most of us know about what we are living on top of.  The unimaginable inferno that suddenly erupted literally underneath an entire neighborhood killed at least four people, but five are still missing and authorities are struggling to identify anything that may be human remains in the pile of ash.  Dozens more were injured and about 40 homes completely destroyed.  All as a result of a rupture in one of those pipes we never think about, that had been buried beneath the neighborhood for the past 54 years. 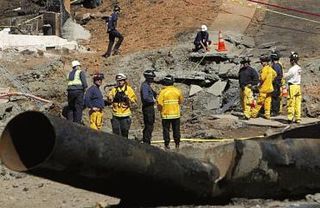 As the utility infrastructure put in place in the post World War II suburban boom continues to age, we may find that, like the plaintiff in Van Sandt, it behooves us to know more about what, exactly, is in our yards.  Utilities will want to recover the high cost of replacing those pipes through rates -- and the relative willingness of ratepayers to pay for infrastructure improvements will undoubtedly have a great deal of impact on whether and how quickly those improvements are made.  Tough choices ahead, and tough times for the people of San Bruno now.

[comments will be held for approval, so there will be some delay in posting]

Hester and Wright on The Evolution of Railroad Easements

Jeffrey Hester (William J. Tucker & Associates) and Danaya C. Wright (Florida) have posted Pipes, Wires, and Bicycles: Rails-to-Trails, Utility Licenses, and the Shifting Scope of Railroad Easements from the Nineteenth to the Twenty-First Centuries on SSRN.  Here's the abstract:

This article responds to a series of class action suits filed against railroads, telecommunication companies, and the federal government claiming that once railroads abandon their corridors, all property rights shift to adjacent landowners. This article reviews the state law on this matter and offers a theory of how courts should handle these cases. After discussing the history of nineteenth-century railroad land acquisition practices, it analyzes the scope of the easement limited for railroad purposes, then discusses the role of abandonment in affecting the rights of third party users of these corridors as well as successor trail owners. The article concludes with a theory of railroad easements that interprets the railroad's powers based on the public participation that helped create and establish these corridors and the tenuous claims of adjacent landowners.

I told myself I wasn't going to do anything other than work on my paper on the Fugitive Slave Act of 1850 and what it teaches us about public perceptions of the rule of law in antebellum jurisprudence.  But, Mr. Ingram's covenant against Yankees has resufaced.  (Thanks to Volokh Conspiracy, who brought this to my attention and Never Yet Melted, which brought it to Volokh's attention.)  A lesson here: be careful what you put in covenants.

Way back in 1998, when this first made the news, Shubha Ghosh (of the antitrustprof blog) and I wrote a short (and we hoped amusing) essay on the covenants.  The covenants purport to prohibit sale to any member of the Yankee. Yankees are defined as people who've lived north of the Mason-Dixon line for more than a year or were born north of the Mason-Dixon line.  But didn't Ingram also include an exemption: if Yankees take a southern loyalty oath and whistle dixie as a sign of loyalty, then you can buy the property.

Lots to say about this, including that Langdon Cheeves once owned the property.  And you know what?  His daughter, Louisa McCord, who was one of the leading proslavery writers of the 1850s, lived in Philadelphia for a few years while her father was serving as president of the Second Bank of the U.S.  Guess she couldn't buy the property under the covenant.

The buyers should have little fear: the covenant's unenforceable.  It's a violation of the restraint against alienation; the benefit's in gross (it seems), so the burden won't run to subsequent buyers; it's likely now been waived by laches (according to the most recent paper, no one's tried to enforce it); and it likely violates the Fair Housing Act.

I use this example in class every year when talking about covenants.  Makes for some amusing discussion.

UPDATE:  Our friends at the Island Packet, the newspaper that broke the story about the current problems with Mr. Ingram's covenants, ran my op-ed on the problems with them on July 17,