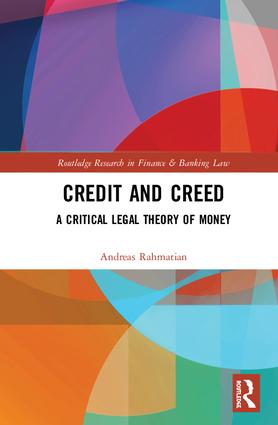 Andreas Rahmatian (Glasgow) recently published a book titled Credit and Creed: A Critical Legal Theory of Money (Rutledge Press), which considers the law of money through a property theory frame. Here's the summary:

Money is a legal institution with principal economic and sociological consequences. Money is a debt, because that is how it is conceptualised and comes into existence: as circulating credit – if viewed from the creditor’s perspective – or, from the debtor’s viewpoint, as debt. This book presents a legal theory of money, based on the concept of dematerialised property. It describes the money creation or money supply process for cash and for bank money, and looks at modern forms of money, such as cryptocurrencies. It also shows why mainstream economics presupposes, but avoids an analysis of, money by effectively eliminating money from the microeconomic market model and declaring it as merely a neutral medium of exchange and unit of account. The book explains that money rather brings about and influences substantially the exchange or transaction it is supposed to facilitate only as a neutral medium. As the most liquid of all assets, money enables financialisation, monetisation and commodification in the economy. The central role of the banks in the money creation process and in the economy, and their strengthened position after the bank rescue measures in the wake of the financial crisis 2008-9 are also discussed.

Providing a rigorous analysis of the most salient legal issues regarding money, this book will appeal to legal theorists, economists and anyone working in commercial or banking law.