This just in from Tim Iglesias (San Francisco):

The State of the Low Income Housing Tax Credit Program:
What’s Working, Problems, Solutions and Visions for the Future

TheJournal of Affordable Housing & Community Development Law(the Journal)invites articles and essays on the theme of the state of Low Income Housing Tax Credit program. What’s working? What are important problems/issues and proposed solutions? What are visions for the future? The Journalwelcomes essays (typically 2,500–6,200 words) or articles (typically 7,000-10,000 words).

In addition, the Journalwelcomes articles and essays on any of the Journal’straditional subjects: affordable housing, fair housing and community/economic development. Topics could include important developments in the field; federal, state, local and/or private funding sources; statutes, policies or regulations; and empirical studies.

The Journalis the nation’s only law journal dedicated to affordable housing and community development law.  The Journaleducates readers and provides a forum for discussion and resolution of problems in these fields by publishing articles from distinguished law professors, policy advocates and practitioners.

Interested authors are encouraged to send an abstract describing their proposals. Submissions of final articles and essays are due by May 1, 2019. Please email abstracts and final drafts to the Journal’s Editor-in-Chief, Tim Iglesias, at iglesias@usfca.edu. The Journal also accepts submissions on a rolling basis. Please do not hesitate to contact the Editor with any questions.

Kelman on Nollan, Horne, and Takings

Not atypically, the Supreme Court in Horne interprets the canonical Nollan narrowly as a case about developer exactions.  Viewed that way, Nollan does not speak to the issue in Horne: the raisins that the government took from the owners were not surrendered in exchange for explicit permission to engage in an activity the government either did or could forbid.

In Nollan itself, the Court is clear that the state should not be discouraged from using its preferred policy instrument to protect public view of the ocean (allowing development of a bigger, view blocking structure and seizing a viewing easement on the landowner’s property) rather than an inferior instrument (refusing to permit development) by being forced to compensate when it seizes the easement.  If an owner accepts the state’s offer to surrender the easement (rather than merely refusing to develop) we know that the deal is Pareto superior.

In Horne, the federal government should not be induced to use an inferior policy instrument that does not give rise to a duty to compensate (ex ante production quotas or ex post restrictions on raisin sale) rather than a superior one (seizing raisins once market conditions are known) by being forced to compensate only if it uses the instrument that involves a traditionally compensable physical seizure.

Though it is generally easiest to tell in exaction cases that the owner prefers the state’s favored policy choice when the owner surrenders property in exchange for a permit, it is simple to tell in Horne as well because the owners retain a contingent interest in the profits earned on the sale of seized raisins, and any rational grower would prefer that to a simple sale restriction.

The John Marshall Law School in Chicago seeks two or more experienced faculty members to serve as full-time visiting professors for the 2019-2020 academic year (one or both semesters). We need coverage in the areas of Civil Procedure, Corporations, Employee Benefits, Estates & Trusts, Income Taxation, Legal Research and Writing, and Property. Candidates must have law school teaching experience. It is contemplated that the successful candidates will be current full-time faculty members at ABA-approved law schools, although others with extraordinary credentials may be considered.

To apply, submit a current CV, cover letter, and three professional references to Associate Dean David Sorkin at 7sorkin@jmls.edu. The Committee will begin reviewing applications as they are received and will continue on a rolling basis until the positions are filled. We may conduct an interview via Skype or a similar platform or in person, and may request submission of teaching evaluations or other materials.

The John Marshall Law School is committed to diversity, access, and opportunity. Subject to the approval of our accreditors, JMLS is in the process of being acquired by the University of Illinois at Chicago, with an anticipated closing date in August 2019. For more information, visit www.jmls.edu and jmls.uic.edu. 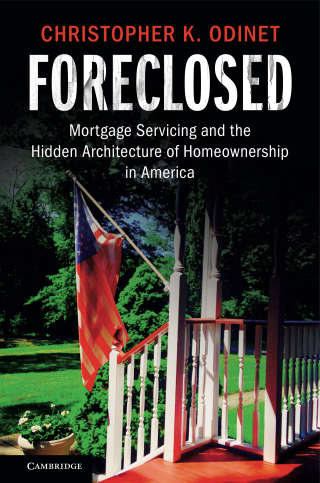 Anyone who knows me, knows I've been obsessed over the past few years with mortgage servicers (what I call the "mortgage middlemen"). My beef with them is that they hold enormous power over homeowners, yet homeowners have no choice in their selection (or quality) and servicers are notoriously abusive, negligent, or incompetent when it comes to dealing with homeowners in financial distress. Shameless plug: have you ever wanted to know a lot more about mortgage servicers and the legal and financial issues they present? If so, check out my new book with CUP (just released today!) titled "Foreclosed: Mortgage Servicing and the Hidden Architecture of Homeownership in America."

Interestingly, the U.S. Fifth Circuit recently decided a case called Christina Trust v. Riddle where a homeowner brought a claim against one of our country's most infamous and troubled mortgage loan servers (Ocwen Financial [and lesser known servicer BSI was added as well]) for failing to properly handle the homeowner's loss mitigation application as required under the Real Estate Settlement Procedures Act (another plug: chapter 3 of my book has some really horrific stories of how servicers treated homeowners and "lost" their loss mitigation applications in the wake of the financial crisis):

Riddle, our homeowner, also asked the court to impose vicarious liability up from the servicer to the actual owner of the loan (which was Christina Trust - a securitization trust created after the loan was originated by Bank of America). The court stated that:

. . . Riddle's theory of vicarious RESPA liability theory requires pleading facts that suggest an agency relationship between Bank of America and either Ocwen or BSI.

Unfortunately, Riddle's lawyer did not undertake an agency analysis in the pleadings, which the court found problematic:

Without facts suggesting an agency relationship, even if everything Riddle alleges in her complaint is true, her complaint does not "state a [RESPA] claim" against Bank of America at all—let alone one that is "plausible on its face."

What is more problematic, however, is that the court didn't seem to think that, even if the pleading did include an agency analysis, Riddle could prevail in the vicarious liability claim:

Even if Riddle had pleaded facts suggesting such a relationship, we hold in the alternative that the district court appropriately dismissed her RESPA claim for another reason: Bank of America, as a matter of law, is not vicariously liable for the alleged RESPA violations of its servicers. . .

A loan servicer's obligation to follow this regulation derives from RESPA itself, which also confines this obligation to servicers alone. . . The statute prescribes that "[w]hoever fails to comply with any provision of this section shall be liable to the borrower for each such failure[.]" . . . Because only "servicers" can "fail to comply" with 12 U.S.C. § 2605(k)(1)(E), only servicers can be "liable to the borrower" for those failures. . . . The text squarely settles the issue.

I find this case and its analysis troubling for the same reasons I find cases involving servicer liability for their contractors and subcontractors troubling (as I describe in Chapters 6 and 8 of my book and here). Servicers derive their power to deal with homeowners from the trust that owns the mortgage loans (i.e., from the mortgage-backed securities investors). Every pooling and servicing agreement in the country makes this clear. These agreements also give a tremendous amount of discretion to the servicer (which is often ill-equipped and ill-resourced to deal with the high-touch activities that are needed to successfully deal with defaulting and distressed homeowners). However, when servicers misbehave, the investors do not bear the brunt of the conduct of their servicer-servants. This, in my view, gives very little incentive for securitization sponsors and those that select servicers to do a thorough job vetting servicing firms before deciding which ones to manage the loans in various trust pools. It also gives aggrieved homeowners a diminished chance of actual recovery if the litigation results in a judgment against a thinly capitalized servicing firm. Consider that in the UCC article 9 context, creditors who undertake repossession activities cannot relieve themselves of liability by saying that the repossession company they hire is not, in fact, their agent. Rather, creditors are automatically liable (i.e., vicariously liable) for the acts of their agents in undertaking the repossession of collateral if a breach of the peace occurs. See U.C.C. 9-609 cmt 3. So, why not servicers too? In some ways, article 9 debtors are better off than homeowners with a mortgage. As I described in chapter 8, tenants are also given superior protections. So much for the sanctity that the law places on the castle-like home.

In sum, homeowners continue to face legal hurdles in asserting their rights against servicers, driven largely by the fact that current legal regimes are ill-equipped to deal with (or even fully-recognize) the mortgage loan securitization structure. For solutions on reforming mortgage and regulatory law in this space (one last shameless plug), check out Foreclosed: Mortgage Servicing and the Hidden Architecture of Homeownership in America here!