Parking on public streets is scarce. The current allocation system for parking spots based on rule of capture coupled with low parking fees creates a tragedy of the commons scenario. The misallocation of parking has consequences for commerce, for access to public spaces, and for pollution and congestion. Municipalities have not widely adopted the solution that economists propose to solve this scarcity problem: increase the price. Politics aside, the reluctance of municipalities to do so may be explained by the unique nature of public property as reflected in well-rooted legal and societal constraints. This unique nature helps explain, for example, municipalities’ ban of software applications (apps) allowing occupants of curbside parking to “sell” their spots to would-be occupants in Boston or San Francisco. While the ban may be justified, the unique nature of public property is not incompatible with some well-designed, efficiency-oriented policies, as this paper will put forward. This article distills the legal constraints on curbside parking and any other public property management by drawing on case law regarding parking meters, case law on public resources managed in trust for the public, and decisions by municipalities regarding parking apps and privatization of parking meters. These constraints include, among others, that public property shall not be used to raise revenue, although placing a price on it may pursue other regulatory aims consistent with public use, or that municipalities shall not lose control of the public spaces dedicated to curbside parking. At a normative level, the above constraints provide a framework for assessing policies regarding curbside parking and, by extension the management of any other public property resources. At a positive level, the article proposes ways to make efficiency compatible with the principles guiding the management of public property. It analyzes to what extent the efficiency oriented policies that would translate into a price increase—variable pricing, tradable property rights, and privatization—clash with those principles constraining the monetization of public property. In addition, the article concludes by pointing to other situations where its analytical framework could be extended, such as other uses of public streets (for instance, use of public bus stops by shuttle-buses of private companies) or existing practices in connection to public resources of a similar nature (for instance, semi-privatization of beaches by surfers).

Gregory Stein (Tennessee) has posted Will the Sharing Economy Increase Inequality on SSRN. Here's the abstract:

The rise of the sharing economy benefits consumers and providers alike. Consumers can access a wider range of goods and services on an as-needed basis and no longer need to own a smaller number of costly assets that sit unused most of the time. Providers can engage in profitable short-term ventures, working on their own schedule and enjoying many new opportunities to supplement their income. Sharing economy platforms often employ dynamic pricing, which means that the price of a good or service varies in real time as supply and demand change. Under dynamic pricing, the price of a good or service is highest when demand is high or supply is low. Just when a customer most needs a good or service – think bottled water after a hurricane – dynamic pricing may price that customer out of the market. This Article examines the extent to which the rise of the sharing economy may exacerbate existing inequality. It describes the sharing economy and its frequent use of dynamic pricing as a means of allocating scarce resources. It then focuses on three types of commodities – necessities, inelastic goods and services, and public goods and services – and discusses why the dynamic pricing of these three types of commodities raises the greatest inequality concerns. The Article concludes by asking whether some type of intervention is warranted and examining the advantages and drawbacks of government action, action by the private sector, or no action at all.

Alexander on Human Flourishing and the Right to Destroy

Gregory Alexander (Cornell) has posted Of Buildings, Statues, Art, and Sperm: The Right to Destroy and the Duty to Preserve (Cornell Journal of Law & Public Policy) on SSRN. Here's the abstract:

Markets require some sort of property rights, including transferability. Without transferable property rights market relations cannot get off the ground. Moreover, markets assume that these rights refer to some resource, some thing that is the object of the market relationship. In this sense property is, as some commentators recently have argued, about things. Saying that property is about things doesn’t tell us very much, though. It tells us nothing about the sorts of things that are the object of property rights, and it gives no indication whether property rights are uniform and fixed regardless of the sort of thing involved. Things are not all of a piece; pencils are not Picassos. There is no good reason to think that the law of property should treat all things alike. Modularity can take us only so far. Property law does and should make distinctions regarding the rights that owners have or don’t have and the extent of those rights depending upon the sorts of things they own. This Article investigates distinctions that property law does draw or should draw with respect to the right to destroy. That right has important implications for the market because the consequence of full exercise of the right, i.e., destruction of the thing, is complete and irrevocable removal of an asset from future market transactions. Where the asset involved is of a fungible sort, a pencil, for example, there is little cause for concern about this loss. The losses about which we worry, however, are those involving non-fungible items, pearls of great price. Such losses include historic buildings and important works of art. Disputes involving the right to destroy have ranged farther, though. Among the most contentious and sensitive of these are disputes over the disposition of human reproductive material. These controversies too have implications for the market, as human sperm and eggs may be sold and bought under certain conditions. Despite its importance, the right to destroy is one of the least discussed twigs in the proverbial bundle of rights constituting ownership. A recent article by Lior Strahilevitz analyzes the right in detail. Other than his article, only an earlier article by Edward McCaffery, and 1999 book by the late Joseph Sax, Playing Darts with a Rembrandt, have discussed the right to destroy within the past several decades. McCaffery’s essay takes the position that most courts have adopted, rejecting the claim that owners have the right to destroy that which they own. McCaffery regards such a right as “an embarrassment in Anglo-American law.” This appears to be the conventional wisdom, with the recent edition of Black’s Law Dictionary excluding the right to destroy from the incidents of ownership included in its definition of ownership. More recently, however, Lior Strahilevitz has provided a powerful defense of the right to destroy. Strahilevitz bases his argument substantially on expressive values implicated in an owner’s preference to destroy an object that he owns. Sax’s book opposes a right to destroy with respect to works that have cultural significance. This Article analyzes the right to destroy from the perspective of the human flourishing theory that I have been developing over the past several years. I will discuss four controversies in which the related questions whether owners have a right to destroy what they own and whether they have obligations to preserve their property. The settings that I will examine, albeit briefly, are historic preservation, artists’ destruction of their own work, removal of public statues, and destruction of frozen sperm. My aim is to show how the human flourishing theory provides an illuminating framework for analyzing what is at stake in disputes over an owner’s asserted right to destroy something that he owns. Hopefully, this framework will provide a more satisfying, analytically and morally, means of resolving such disputes. To set the stage for these case studies, I begin with a brief summary of Lior Strahilevitz’s argument in support of the right to destroy.

Lovett on the Concept of Good Faith in a Mixed Jurisidction 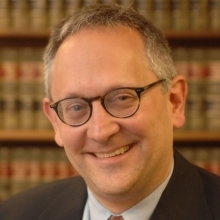 The article first observes that in all of the instances in which good faith is employed in Louisiana property law an initial owner of a corporeal thing either risks losing all or a portion of her property rights to another person who has invaded the owner's sphere of exclusive control or may be required to compensate another person who has acquired possession of the thing. In other words, the law shifts a property entitlement to someone who would ordinarily not be entitled to any legal protection. The article argues that in these entitlement shifting situations the Louisiana Civil Code uses the concept of good faith as a crucial mediating device, reallocating the rights and obligations of the original owner and the new player who has arrived on the scene either uninvited or through some intermediary transaction.

The article demonstrates that the concept of good faith has two essential components in those contexts: honesty and carefulness. Honesty is a fundamental and constant requirement for good faith status. Carefulness, however, plays a more variable role. In the context of building encroachments, the Civil Code only requires a minimal level of carefulness-no knowledge of obvious red flags. Under the bona fide purchaser doctrine, different market situations can lower or raise the level of carefulness required to achieve good faith status. In the law of accession, a good faith possessor must rely on a written title translative of ownership but otherwise must only be innocently unaware of defects. Finally, under the law of acquisitive prescription of immovables, a good faith possessor must rely on a just title and meet a rigorous standard of objective reasonableness.

This article shows that that as the consequences of the entitlement shifting rule increase, good faith is transformed from a relatively simplistic and mechanistic tool focused primarily on honesty to one that becomes increasingly precise, exacting and ethically responsive, focusing more and more on the transactional and contextual carefulness of the good faith claimant's actions-and sometimes on the relative carelessness of other parties in a property relationship. The article concludes by speculating on what Louisiana property law might gain and lose if the notion of good faith were banished from consideration.

This just in from Timothy Mulvaney (Texas A&M). The conference looks to be quite an interesting gathering, which includes a key note address by Micheal Gerrard (Columbia). 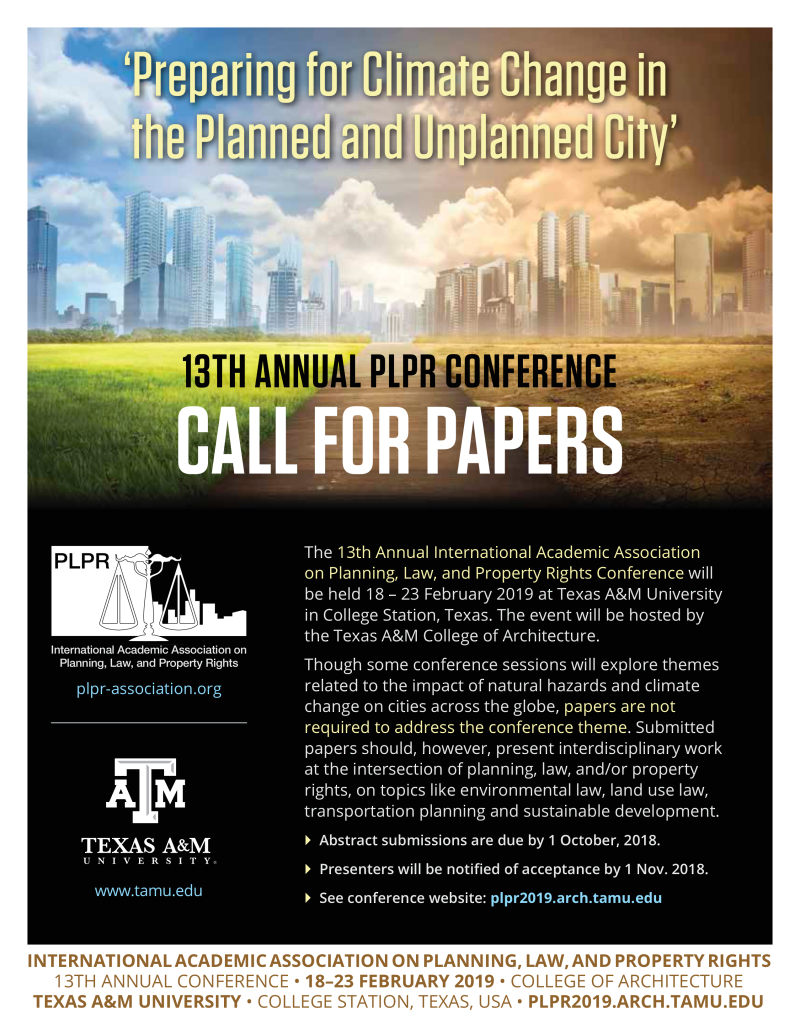