The High Cost of Rental Housing in 2018 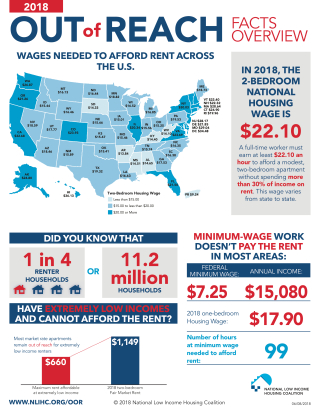 Happy Monday, property law profs! Last week, the National Low Income Housing Coalition released its annual report titled Out of Reach 2018. The basic takeaway is that there's nowhere in the US where a full-time worker (no over-time) earning minimum wage can afford a decent two-bedroom apartment. Here's an excerpt from the study:

The report’s Housing Wage is an estimate of the hourly wage a full-time worker must earn to afford a rental home at HUD’s fair market rent (FMR) without spending more than 30% of his or her income on housing costs. FMRs provide an estimate of what a family moving today can expect to pay for a modestly priced rental home in a given area. This year’s findings demonstrate how far out of reach modestly priced housing is for the growing low-wage work force, despite recent wage growth, and for other vulnerable populations across the country.

Now of course, not everywhere in states like New York does one have to earn that much and work that long to afford a place to rent. To that end, the interactive map allows the user to zero-in on many zip codes within a state to get more customized data.

When you cover landlord-tenant law, this is a really great tool to use in class. This, used in conjunction with the Urban Institute's mortgage origination map, can help students see the real world effects of our housing economy--who gets what kind of tenure and what they pay for it. Have a great week!