Walsh and O'Mahony on Property Law Ideologies in England and Ireland

This article examines the role of property ideologies, and the local contexts in which they were articulated and applied, in shaping English and Irish land law. Despite their shared histories and influences – from the transplant of the common law system to Ireland to traditions of training Irish lawyers and judges in English universities – the politics of property led Irish and English land law down distinct, and sometimes oppositional, ideological paths in the twentieth century. The politics and practices of land tenure, competing economic and property ideologies, and their direct links to the evolution of national identity and statehood in each jurisdiction, shaped the foundational commitments of English and Irish land law. The article traces the complexities of lived experience in regulating the use and ownership of land, as well as the role of global and local forces – from world-system movements (for example, the influence of European political developments in 1937 on the Irish Constitution) or bi-lateral relationships (for example, the impact of the Irish land wars on the English land reform movement, or the ongoing trade dependency between Britain and Ireland into the twentieth century). Our analysis reveals the multiple competing, and at times overlapping, property ideologies that shape property systems; and the powerful role of events and externalities in contextualising the practical, political, social and symbolic meaning and content of the law as it has evolved in local contexts, and in determining whether, and when, the status quo prevails, or a tipping point for law reform is reached.

NEW BOOK: Insecurity and the Home

This book explores the emergent and internationally widespread phenomenon of precariousness, specifically in relation to the home. It maps the complex reality of the insecure home by examining the many ways in which precariousness is manifested in legal and social change across a number of otherwise very different jurisdictions. By applying innovative work done by socio-legal scholars in other fields such as labour law and welfare law to the home, Law and the Precarious Home offers a broader theoretical understanding of contemporary 'precarisation' of law and society. It will enable reflections upon differential experience of home dependent upon class, race and gender from a range of local, national and cross-national perspectives. Finally it will explore the pluralisation of ideas of home in subjective experience, social reality and legal form. The answers offered in this book reflect the expertise and standing of the assembled authors who are international leaders in their field, with decades of first-hand practical and intellectual engagement with the area.

The table of contents is as follows:

We are delighted to announce that, on Sunday 3 and Monday 4 June 2018, the Bar Ilan University law school and the Center for Jewish and Democratic law will be hosting an international conference titled “Communities & the Law”. The conference will bring together scholars from all branches of law, including private law, constitutional law, local government law and technology to discuss the role of communities in the legal, economic and political spheres.

A series of panels on both conference’s days will include the role of communities in private law (focusing on property law and contracts law); local governments as the law of communities, communities in a multicultural world; Technology, Communities & Cooperation, and feminist approaches to communities.

The full program of the conference is available here.

Save the Date: 2019 International Conference on Planning, Law, and Property Rights

This just in from Tim Mulvaney (Texas A&M): 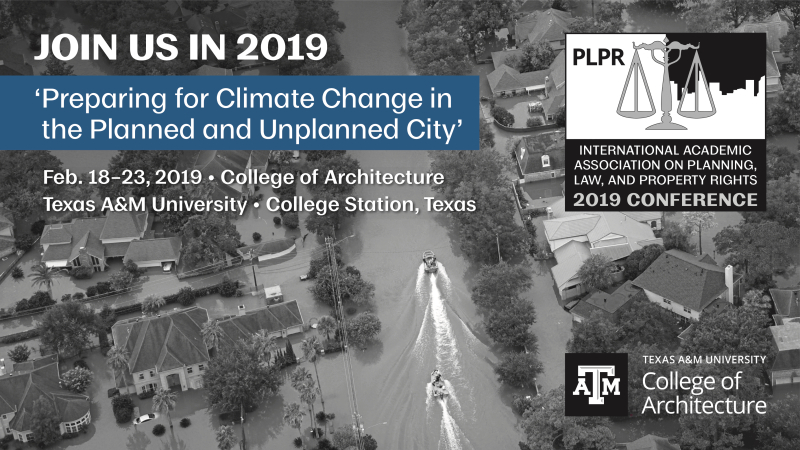 It's that time of year: AALS Call for Papers season! Here's the CFP from the Real Estate Transactions Section:

The year 2018 marks the 10th anniversary of the 2008 housing crisis—an event described as the most significant financial and economic upheaval since the Great Depression. This year is also the 50th anniversary of the Fair Housing Act, which upended many decades of overt housing discrimination. Both events remind us of the significant role that housing has played in the American story—both for good and for bad.

Of the many aspects of financial reform that followed 2008, much of the housing finance-related work was centered around mortgage loan origination and creating incentives and rules dealing with underwriting and the risk of moral hazard. Some of these reforms include the creation of the qualified mortgage safe-harbor and the skin-in-the-game risk retention rules. But when it came to the secondary mortgage market, little significant reform was undertaken. The only government action of any serious importance related to the federal government—through the Federal Housing Finance Agency (FHFA)—taking over control of Fannie Mae and Freddie Mac. This major government intervention into the workings of the country’s two mortgage giants yielded takings lawsuits, an outcry from shareholders, and the decimation of the capital reserves of both companies. Despite Fannie and Freddie having both paid back all the bailout funds given to them, the conservatorship remains in place to this day.

In the area of fair housing, the past several years saw the Texas Department of Housing and Community Affairs v. Inclusive Communities case whereby the U.S. Supreme Court upheld (and narrowed the scope of) the disparate impact theory under the Fair Housing Act. We also saw efforts aimed at reducing geographic concentrations of affordable housing through the Obama administration’s promulgation of the affirmatively furthering fair housing rule.

Yet, meaningful housing reform remains elusive. None of the major candidates in the most recent presidential election meaningfully addressed the issue in their policy platforms, and a lack of movement in resolving the Fannie/Freddie conservatorship is viewed as a major failure of the Obama administration. Additionally, housing segregation and access to affordable mortgage credit continues to plague the American economy.

In recent months, the topics of housing finance reform and providing Americans with credit (including mortgage credit) choices have been a point of focus on Capital Hill and in the Trump White House. Will these conservations result in meaningful legislation or changes in regulatory approaches in these areas? Will programs like the low-income-housing tax credit, the CFPB’s mandatory underwriting requirements, public housing subsidies, and the government’s role in guaranteeing and securitizing mortgage loans significantly change? Where are points of possible agreement between the country’s two major parties in this area and what kinds of compromises can be made?

The Real Estate Transactions Section looks to explore these and related issues in its 2019 AALS panel program titled: “Access + Opportunity + Choice: Housing Capital, Equity, and Market Regulation in the Trump Era.” The Section invites the submission of abstracts or full papers dealing broadly with issues related to real estate finance, the secondary mortgage market, fair housing, access to mortgage credit, mortgage lending discrimination, and the future of mortgage finance. There is no formal paper requirement associated with participation on the panel, but preference will be given to those submissions that demonstrate novel scholarly insights that have been substantially developed. Untenured scholars in particular are encouraged to submit their work. Please email your submissions to Chris Odinet at codinet@sulc.edu by Friday, August 3, 2018. The selection results will be announced in early September 2018. In additional to confirmed speakers, the Section anticipates selecting two to three papers from the call.

All panelists, including speakers selected from this Call for Papers, are responsible for paying their own annual meeting registration fee and travel expenses.

Tenants named in an eviction proceeding, no matter the outcome or the context, find themselves placed on registries collected and maintained by private "tenant reporting services." Tenants whose names appear on these so-called "blacklists" are often denied future renting opportunities, stigmatized and excluded from thepromise of fair housing. At a time of continued rollbacks and dramatic cuts to housing voucher programs andaffordable housing options, a candidate named on a dreaded blacklist can find herself on a quick path tohomelessness. That tenant blacklisting has been allowed to persist is emblematic of how powerless many tenants - and particularly public housing tenants - have become. This paper endeavors to give voice to some of the stories of tenants affected by the practice. It then sets forth an agenda for reform.

She is also working with the mayor of Newark on an initiative to provide free legal counsel to certain individuals facing eviction. Paula has written about this effort here and as follows:

Our State's courts have become inundated with eviction actions, as tenants struggle to make ends meet. In Newark alone, tenant evictions affect 30,000 residents annually, destabilizing families and neighborhoods, targeting the most vulnerable and compounding the crisis in homelessness.

Against that bleak landscape, I applaud Newark Mayor Ras Baraka's commitment to bring to fruition a right to counsel for Newark tenants most at risk of eviction - the disabled, the elderly, and those with incomes no more than two times the federal poverty level. The city's initiative will give voice to tenants otherwise silenced by a system that too often is stacked against them. It is a major step on behalf of fundamental fairness and equal access to justice and should serve as a model for State-wide implementation.

Professors' Corner
Current Developments in Title Insurance Law
Tuesday, May 8, 2018
12:30 – 1:30 pm ET
Speakers: Professor Joyce Palomar, University of Oklahoma College of Law and Professor Barlow Burke, American University Washington College of Law
Moderator: Professor Wilson Freyermuth, University of Missouri School of Law
Professors Palomar and Burke are the country’s most authoritative scholars on the law of title insurance. In May’s Professors Corner program, they will discuss recent developments in title insurance law, focusing most significantly on the proposed changes to the ALTA Owner’s Policies and Loan Policies.
Please note that CLE credit is not offered for this program or any Professors' Corner programs.