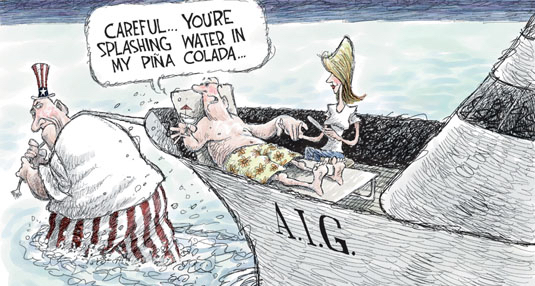 Yesterday, a court that very few lawyers spend much time thinking about (the US Court of Appeal for the Federal Circuit) rendered a decision in an important series of cases regarding the use of takings claims in connection with government intervention resulting from the 2008 crisis. But before I get to the case itself (Starr International v. United States), first a little background . . .

As almost everyone knows, in the wake of the 2008 financial crisis the federal government took several measures aimed at saving many of the country’s largest financial institutions from disaster. Among these institutions were Fannie Mae and Freddie Mac (the mortgage finance giants that shortly prior to the crash either guaranteed or outright owned forty percent of all U.S. residential mortgage debt) and AIG (a Wall Street financial institution that, in the run-up to the crash, entered into complex derivative contracts called credit default swaps with various parties that ended up costing the company trillions of dollars in liabilities that it could not hope to pay).

In order to deal with these failing but systemically important entities, Congress essentially took them over through a series of legal transactions. With regard to AIG, in order to save that entity from collapse and an ultimate bankruptcy, the Federal Reserve Bank of New York made a loan to it in the amount of $85 billion. In exchange for this loan, the New York Fed obtained a majority and controlling number of shares in the company. It was argued by market commentators at the time that without such measures, “ultrasafe money-market funds owned by individual investors to complex derivatives used by Wall Street banks” would crash.”

In the cases of both Fannie/Freddie and AIG, the companies were in tremendous financial distress and, moreover, the financial health of these entities had become so intertwined with the financial health of the country that a failure of any one of them would have had dire consequences. However, these entities were private companies and each had their own private shareholders. Because the federal government required that a significant amount of the control and economic rights of these shareholders be suppressed in exchange for federal aid, a number of these shareholders asserted constitutional takings claims.

In 2013 and 2014 groups of Fannie/Freddie shareholders initiated lawsuits against the government, arguing that, among other things, the FHFA’s orders regarding the sweeping of net cash, the cessation of dividends, and the removal of the entities from the publically traded marketplace constituted an unconstitutional taking of their property rights. As Nestor Davidson (Fordham) wrote in his 2016 article Resetting the Baseline of Ownership: Takings and Investor Expectations After Bailouts, to date courts have held that the actions taken by the FHFA with regard to Fannie and Freddie do not in fact amount to a taking of property.

I’ve argued recently that the reasons behind many of these court decisions hint at a larger move toward embracing the idea that, to quote Eric Freyfogle (Illinois), “that private ownership . . . is a tool that society uses to promote its interests.” For instance, the court in Perry Capital LLC v. Lew (70 F.Supp.3d 208) noted that while it is true that the FHFA foreclosed the possibility of dividend payments to shareholders (other than the treasury) in the near-term, the fact that these investors had purchased stock in private entities that were widely known to be highly regulated by the federal government makes the fact that dividend payments had ceased even more foreseeable and reasonable, and thereby less evident of a deprivation of their “reasonable investment-backed expectations.” This idea of an investor operating in an arena that is inherently public and attuned to societal policy shifts—thereby imbuing such property rights with societal concerns—underscores the assertion that “[t]here is no need to weigh public interests against private interests in a kind of apples versus oranges assessment. . . The public interest is central and private rights exist to the extent their recognition helps promote that public interests.”

Similarly (and to the point), in 2011 AIG’s largest shareholder (Starr International Co.) filed suit against the government in the U.S. Court of Federal Claims, arguing that although the New York Fed may have had the authority to make the loan under the company’s then state of financial exigency, it did not have the authority to require stock in exchange for such credit and thereby become the controlling shareholder. Due to this illegal act, so the shareholder alleged, the government had effectuated a taking of the plaintiff’s property rights in the company. The trial court in Starr International Co. v. United States (121 Fed.Cl. 428) agreed with the plaintiff that the New York Fed had acted beyond its authority when it took an equity stake in the company in exchange for the loan, but the trial judge nevertheless denied that a taking had occurred. Importantly, the court stated that there had been no damage as a result of the fed’s act, due to the fact that without the loan the shareholders (while certainly free of interference with their economic and governance rights in AIG) would have held merely worthless paper in the company.

[As side note, Starr International is a Panama corporation with its headquarters in Switzerland. It’s chairperson and controlling shareholder is Maurice Greenberg, who was the CEO of AIG until 2005. Also, although Starr is the main plaintiff, it represents 274,000 AIG shareholders in a certified class for this litigation.]

The trial court in Starr noted that “[i]n the end, the Achilles' heel of Starr's case is that, if not for the Government's intervention, AIG would have filed for bankruptcy.” If such an insolvency proceeding had been commenced, the court noted, then “AIG's shareholders would most likely have lost 100 percent of their stock value.” In other words, the shareholders of AIG, for all practical purposes, had property rights that were worthless as the company faced immediate insolvency and ruin. Therefore, having “lost” some of those rights by virtue of the New York fed’s exchange of the loan for the stock did not amount to a taking because the shareholders were actually better off after the equity distribution than they were before.

Needless to say, the AIG shareholder (Starr) appealed the decision to the U.S. Court of Appeals for Federal Claims. That court’s decision was rendered yesterday (Tuesday, May 9, 2017). The holding essentially came down to an issue of standing with regard to the takings claim. Starr argued that it met its standing burden because “the Government’s acquisition of equity harmed Starr’s personal ‘economic and voting interests in AIG,’ independent of any harm to AIG.” The acquisition of the equity stake in AIG, so argued Starr, was “’indistinguishable from a physical seizure of four out of every five shares.’”

The court explored the standing issue at great lengths (with regard to corporate law compliance and regarding the federal reserve loan program), but for the readers of this blog I will focus on what the court said about Fifth Amendment standing. Starr said that the Takings Clause created a “special relationship” between the federal government and the AIG shareholders, and that relationship created standing when the government acted so as to harm Starr's “property” interest related to that relationship. The court was not persuaded by this argument, noting that Starr cited no authority for this Fifth Amendment “relationship” concept. However, the court took note of the fact that “Starr has not demonstrated why that duty would flow directly to a corporation’s shareholders rather than the corporation in the context of an equity transaction that affects all pre-existing shareholders collaterally.” Reading into this, it would seem clear that the court was rejecting the “relationship” theory for the shareholders, but maybe leaving the door open for the corporation to assert the takings claim? The court later stated, in a more omnibus holding paragraph, that Starr’s claims “are therefore exclusively derivative in nature and belong to AIG, which has exercised its business judgment and declined to prosecute this lawsuit.” It’s hard to tell if that statement was meant to apply to the pure takings claim of Starr or merely to other collateral claims related to compliance with corporate law and federal reserve statutes.

In any case, the whole “special relationship” business seems like nonsense anyway. I am certainly no expert in federal courts or civil procedure, so I will not attempt to opine on the intricacies of the standing analysis, but the idea that (even if Starr had standing) that this was a taking under the Fifth Amendment is ridiculous. Obviously an interest in stock in a corporation is a form of property right. That much is well-established. But the circumstances under which the voting power of Starr was diluted by the government’s exchange of a loan for common stock do not present a taking that would require compensation by the government. While it may be true that the “property” right in the stock was in some way diminished, the economic realities of the corporation must give context to the claim. AIG would have gone under and that, in turn, would have rendered Starr’s stock worthless. The fact that Starr ended up (for a period of time) holding stock that had less voting power than before the New York Fed’s loan must be viewed through the lens of the inevitable vanquishing of the stock’s value had no government intervention occurred. Thus, as the trail court noted, without the government action, “AIG's shareholders would most likely have lost 100 percent of their stock value.” Moreover, it was (in my view) within the reasonable public interest for the government to intervene and acquire the stock in exchange for the loan. The fall of AIG would caused significant damaged to the economy. The public interest (indeed, the quite strong public interest) in staving off that kind of wide-spread damage must inform the takings analysis when balancing against the private rights.

But, in truth, the audacity of corporations like Starr in using the Takings Clause as a way to profit from what was essentially their own poor (or malfeasant) decision-making in the lead-up to the financial crisis is really quite appalling. Starr was the controlling shareholder of AIG (thereby able to select AIG's board of directors), and the Starr CEO was the prior CEO of AIG in the run-up years to the crisis. To have allowed AIG to engage in a wide-range of poor investment choices (with serious consequences for everyday Americans) and then to turn around and assert a takings claim against the government AFTER taxpayer funds were used to bailout the company represents exactly the kind of greed that has come to be so closely identified with the 2008 crisis.

In the end, I’m glad the court threw-out Starr’s case on standing, but I would have much better liked had the court smashed the merits of these “bailout” takings claims altogether.

Thanks very much, Chris, for this careful and thoughtful analysis.