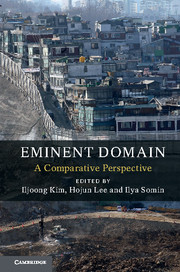 Fresh from Cambridge University Press, property law scholar and friend of the blog Ilya Somin (George Mason) recently published a co-edited book titled Eminent Domain: A Comparative Perspective. The work analyzes the use and abuse of eminent domain in a number of jurisdictions, including Germany, Taiwan, the US, South Korea, and a variety of developing nations. The book came about as a result of a conference hosted by the Korea Development Institute (one of South Korea's leading research centers), as the use of eminent domain in South Korea has attracted a great deal of attention from law and policy makers across the globe.

Here is a summary of the book:
The taking of private property for development projects has caused controversy in many nations, where it has often been used to benefit powerful interests at the expense of the general public. This edited collection is the first to use a common framework to analyze the law and economics of eminent domain around the world. The authors show that seemingly disparate nations face a common set of problems in seeking to regulate the condemnation of private property by the state. They include the tendency to forcibly displace the poor and politically weak for the benefit of those with greater influence, disputes over compensation, and resort to condemnation in cases where it destroys more economic value than it creates. With contributions from leading scholars in the fields of property law and economics, the book offers a comparative perspective and considers a wide range of possible solutions to these problems.
This project has garnered some impressive pre-publication endorsements, including by noted scholars such as Richard Epstein (NYU) and Roderick Hills (NYU), as well as Justice Soon-il Kwon of the Supreme Court of Korea.
Great work, Ilya! An excellent edition to the literature.