Maps of the day: the new winter 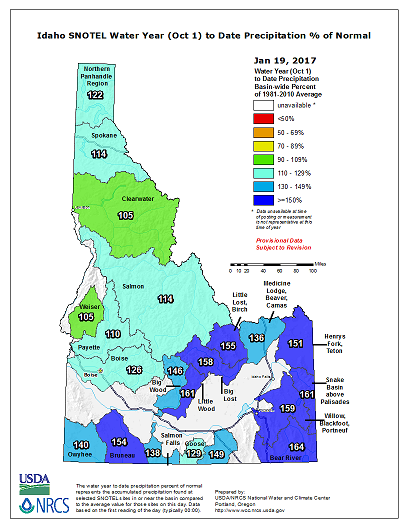 I just came back inside from helping dig my neighbor's car out of the snow pile in front of his house. The last two weeks have provided two snow days for the local school district--one because of too much snow, and yesterday because of too much melting snow. And Boise, which isn't particularly used to significant snow fall, 300 miles to the south of my home in North Idaho, has experienced six snow days of its own.

These are the types of conditions that often cause the cynical to say, "I could use some of that climate change right now."

But for parts of the West, this apparent bounty of snow hides one of the most significant changes will we face in a climate-altered future.

These maps reflect current data from the NRCS SNOTEL sites across Idaho, which measure precipitation and snow pack, and help predict water availability for the coming year. The first is how much total precipitation has fallen in the current water year (since Oct. 1) as a percent of 1981-2010 median. That map shows well above normal amounts of precipitation.

But the real story is in the second map, which shows snow water equivalent in the current snow pack. This is a more useful measure of water availability, since is reflects the amount of water stored in our snow pack reservoirs--water that will be available next summer as the snow pack m 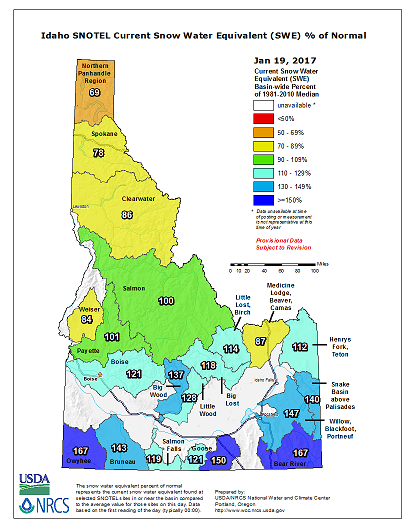 elts. That map tells a different story, with most of North Idaho well below normal, notwithstanding the piles of snow in our front yards. Much of that above average precipitation fell in the early winter as rain, and has already made its way downstream to the ocean.

In the lower elevation mountains of the Pacific Northwest, climate change will raise snow levels, bring more rain and less snow, and shift the peak of the hydrograph to earlier in the year.  The snow reservoirs will hold less water, and less water will be available everyone: farmers, cities, hydroelectric dams, and anadromous fish.

And as these maps demonstrate, we are seeing those effects today. More rain, less snow, and a less predictable water future.