For me, being a spectator as the race for the White House comes to an end is akin to trying to find the exit of a casino.  Even if you want to get out, there are distractions that keep you pulled in at every turn.  If you can get past the distractions, the exit signs are never clearly marked.  Once you actually find an exit, it’s never as simple as just walking out the door; there’s always another hallway or stairwell or lobby you have to get past before you can truly be finished with the casino.

I feel the same way about the presidential election.  Based on my anecdotal evidence, I don’t think I’m alone.

While drowning myself in news articles about the election but trying to think about something, anything, else, I wondered, what property does the President get to take when he (or, perhaps very soon, she) leave office?  Obama has received tons of gifts since he was elected in 2008—a parking pass for all future Chicago Blackhawk games, a ping pong table, Mexican tequila, a lot of clothes, rugs, paintings, etc. He’s gotten some good loot.  But query, does he get to keep all of it? 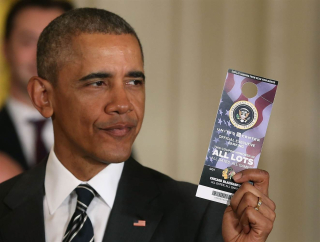 Gifts to politicians are something I have dealt with in a previous life.  Before going to law school, I worked for then-U.S. Senator Mary L. Landrieu, and at one point in my Senate staffer career, helped the Senator with the Labor, HHS, Education Appropriations bill.  This was in the days before earmark reform, so each member had a pot of money to use for projects in his own state or district.  Despite some very public reports about the abuse of such earmarks—remember the bridge to nowhere?—earmarks were pretty small potatoes.  In 2006, which happens to be the last year I worked in the Senate, earmarks cost $29 billion.   The 2006 federal budget was $2.82 trillion.  The costs of earmarks was not even a full drop in the bucket. Regardless, earmarks were seen as pork and pork was seen as bad.  The House banned earmarks and now all project funding has to run through the executive branch instead of the legislative branch.

Back before the ban, constituents would come to Washington with write ups on the project(s) they wanted funded and, if they were from Louisiana and had a project related to health care or education, they got to meet with me.  What lucky ducks they were to meet with a then 22-year old recent college graduate who had studied a lot about political theory but who knew very little about politics in practice.

The one thing I and my colleagues did know, however, were the gift rules.  Because we were meeting with people who wanted the Senator to appropriate to their project $100,000, or $250,000, or $500,000, it was not unusual for the constituents to bring in a gift or want to take us out for a fancy dinner.  Giving a member of the Senate or her staffer something while asking for money in return raises at least the appearance of impropriety, so the Senate has strict gift rules.  Under Senate rule 35.1(a)(2)(A), you cannot accept an individual gift of more than $50, and you cannot accept gifts from one person that add up to more than $100 in a year.  If someone tried to give you something worth more, rule 35.1(c)(1)(A) requires you to promptly return the gift.  The Senate gift rule has a lot of other nuances to it, but the bottom line was always never take anything that costs more than $50 and if you weren’t sure, it’s better to be safe than sorry.

Now I am not a hockey aficionado—remember, I live in Louisiana . . . we don’t do hockey—but I am a football fan and, as a regular attendee of college and professional football games, I know that parking spots to sporting events are outrageously expensive!  Heck, a parking pass at Tulane is outrageously expensive!  So, does Obama get to keep all the gifts, including the lifetime parking pass to the Blackhawk games, he has received or is there an Executive Branch rule 35?

Turns out there is a lot more than an Executive Branch rule 35.  Under Article I, Section 9, clause 8 of the Constitution, the President is not allowed to accept any present from any “King, Prince, or foreign State” without Congressional approval.  Given the gridlock in Congress today, it seems hard to imagine Congress approving any gift given to Obama, but fortunately in 1966 the Foreign Gifts and Declarations Act was passed which provided, among other things, that Congress consented to the President receiving “a gift of minimal value tendered and received as a souvenir or mark of courtesy.”  5 U.S. Code § 7342(c)(1)(A).  Currently “minimal value” is defined as $375, but that figure is re-evaluated every three years and will be up for re-evaluation in 2017.  Anything given to the President by a foreign state that costs more than $375 is immediately turned over to the National Archives, a practice that can produce interesting results.  When George W. Bush was in the White House, for instance, he received a Bulgarian sheepdog, Balkan, from the President of Bulgaria.  Pure bred dogs ain’t cheap; a Bulgarian sheepdog costs between $1,000 and $1,500.  So President Bush couldn’t keep the dog, but the National Archives didn’t exactly want a puppy running around either. Solution:  President Bush bought the dog (he couldn’t keep the dog as a gift, but he could pay face value for the dog, i.e. removing the dog from the “gift” category and into the “things bought by POTUS” category) and gave Balkan to a friend in Maryland.  Executive re-gifting at its finest.

That covers gifts from foreign dignitaries, but what about gifts from U.S. citizens?  Under the Ethics Reform Act of 1989, no federal officer, including the President, can accept any gift from someone who is seeking action from, doing business with, or is regulated by one’s agency, or whose interests may be substantially affected by the performance or nonperformance of one’s official duties. 5 U.S.C. § 7353(a).  There are some caveats to that broad rule for federal officers other than the President.  For example, other federal officers can accept gifts of less than $20 in value, assuming the gift is not being given as a quid pro quo. 5 C.F.R. § 2635.204(a).  And the other federal officers can accept gifts based on family relations or friendship. 5 C.F.R. § 2635.2014(b). 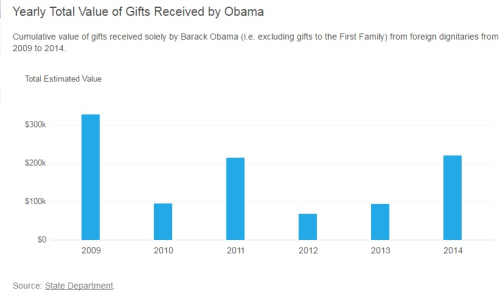 What does all this mean?  Obama now has free parking at the Blackhawk games which makes him actually a lucky guy.