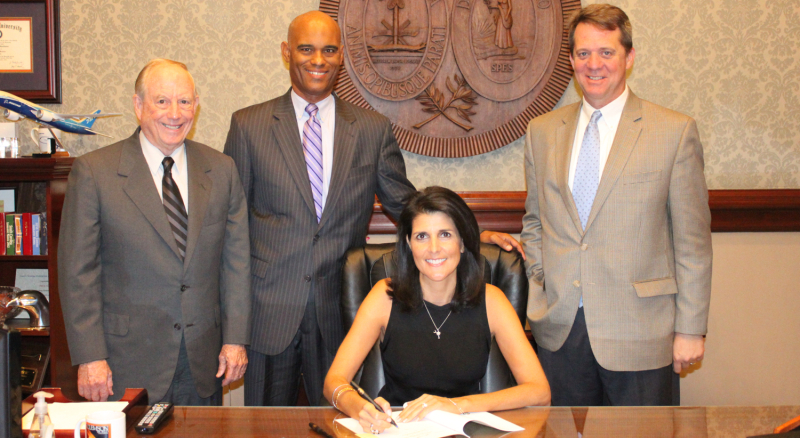 (From left, Ed Mullins, commissioner for the South Carolina delegation of the Uniform Law Commission, Thomas Mitchell, Gov​. Nikki Haley, and South Carolina Rep​. James E. Smith, Jr., primary sponsor of the UPHPA in the South Carolina House of Representatives, for the ceremonial signing of the legislation)

Here at the Property Law Prof Blog we love to highlight the great work of our fellow property law scholars. Today's post focuses on Thomas Mitchell (Texas A&M) and his work in the area of heirship property.

Thomas served as the reporter and head of a Uniform Law Commission (ULC) project of some years ago to create a Uniform Partition of Heirship Property Act (UPHPA). Prior to that he served on the American Bar Association’s Property Preservation Task Force that developed the proposal requesting the ULC to form a committee to draft an act addressing partition of property. The goal of the UPHPA is to preserve family wealth (in the form of real property) passed along from generation to generation. While wealthy families often engage in sophisticated estate planning to deal with issues of generational wealth transfer, those with smaller estates often use a basic will or die intestate.

Thomas' work has particularly focused on partition issues in the context of lower- and middle-income families where often the majority of the value of the estate is comprised of real property. Under state law, when an owner of real property dies intestate the property is transferred to his heirs as tenants-in-common. These new owners often find themselves in a vulnerable position due to the fact that any one of them can force a partition of the property. Real estate speculators often seize upon this opportunity by acquiring a small share of the property from one of the heirs in order to then be able to file a partition action and force a sale. In doing so, the investor can acquire the entire parcel for a price well below its fair market value. This often has the effect of depleting the family’s inherited wealth in the process.

The UPHPA seeks to address this issue by providing a series of simple due process protections: notice, appraisal, right of first refusal, and if the other co-tenants choose not to exercise their right and a sale is required, a commercially reasonable sale supervised by the court to ensure all parties receive their fair share of the proceeds. At this point eight states have enacted the UPHPA into law: Alabama, Arkansas, Connecticut, Georgia, Hawaii, Montana, Nevada, and (most recently) South Carolina. It is impressive to note that 4 of the 8 states that have enacted it are in the South, the region where it’s generally accepted that partition abuses have been the greatest as well as the region most people believed would be most resistant to enacting the legislation. Pictured above is Thomas was Governor Nikki Haley at the bill signing last week. The bill has been officially renamed the Clementa C. Pinckney Uniform Partition of Heirs’ Property Act in honor of the late pastor and Senator Clementa Pinckney, who was killed in the 2015 Emanuel African Methodist Episcopal Church shooting in Charleston.

At this time, Thomas and his supporters believe they are likely to get introductions in 2017 in the New Mexico and West Virginia legislatures and are the cusp of securing commitments to introduce it in Mississippi and Texas as well.

In an effort to get the UPHPA enacted into law, Thomas has testified before many state legislatures, published numerous law review and other articles on the topic (check out his Alabama Law Review article titled Reforming Property Law to Address Devastating Land Loss discussing the issue), made presentations to legal organizations and community groups, and more. He is just the second African-American ever to serve as a reporter for the ULC in its 124-year history, a period of time in which the ULC has drafted more than 350 uniform acts.