I am in recovery. 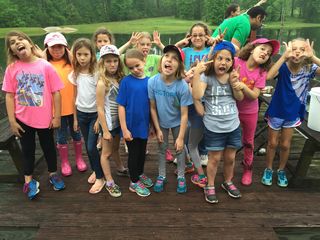 During the last weekend of April, I took my daughter and her Brownie Troop camping. Sure, thirteen little ones look cute standing on the dock making funny faces after fishing, but at 3pm when the heavens open and you are standing amid a rain storm with a group of screaming second graders, they are not quite as adorable. Or when 2am rolls around and the girls are like whac-a-moles—you get one in the tent in her sleeping bag and another one pops up. Again, not the precious angels shown here. 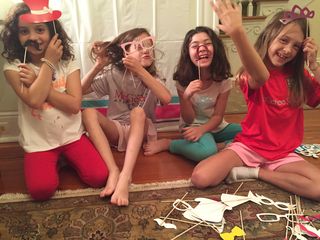 The next weekend (aka three days ago), my daughter had a sleep over to celebrate her eighth birthday. There were games, there were ice cream sundaes, there were high-pitched squeals. There was staying up until the wee hours of the morning to make sure the girls stayed down all night, and there was waking up before sunrise because, well, the girls were up and I like the downstairs of my house too much to let them have unsupervised control over it for any lengthy period of time.

While chaperoning these weekends of elementary school bliss, I realized that I could teach the better part of my 1L property class to the girls using the experiences they were having. It was a real life, in the moment type of class a la Jerry’s field class at the University of Idaho. It was, in the words of Tony the Tiger, grrrrrrrrrrrrrrrrrrrrrrrrrrrrrrrreat.

I started at the very beginning, asking “what is property?” The girls looked at me like I was crazy, but then, so do my 1Ls when I ask the same question. Are your thoughts property? Is your persona property? Is your body property? All of these questions were dealt with during my chaperoning weekends.

8-year-old #1: (high-pitched yelp) She’s touching me! She’s touching me!
8-year-old #2: (higher-pitched yelp) She started it! She touched me first!
Me: (after drinking a sip of beer) Everyone keep your hands to yourself. Your body is yours, though we don’t want to call your body your “property” as that has negative connotations. But you have full rights to exclude everyone else from your body, unless parts of your body or organs have been removed, in which case you have no rights to them. See Moore.
8-year-olds #1 and #2: (looking at me like I have two heads) Huh?
Me: Well, you see there was a guy in California . . . . (8-year-olds run off, having forgotten what they were fighting about and now sharing the common thought that I’m nuts, not unlike my 1L property students)

Next, I taught about the Tragedy of the Commons.

Me: (putting out four large, family-sized bags of potato chips that were sufficient to feed an army) Snack time!
All 8-year-olds: (gulping down chips like they have not been fed for days) Gimme! She got more chips than I did! (munch, munch, munch) I want more! (smack, smack, smack)
Me: Sigh. (drinks longer sip of beer) I will divide the chips into even amounts for you, otherwise you will overconsume the chips out of fear that someone else will get your chips, thereby depleting all of our chips, and leaving us with no more snack time resources. This is a good time for me to tell you a story. Gather ‘round everyone for a cattle-grazing tale by a man named Garrett Hardin . . .
My 8-year-old: (whispering) Mom, please don’t embarrass me.
Me: Siiiiiigh. (opens another beer)

Then we moved into what makes up the proverbial bundle of sticks of property rights by first looking at the right to exclude.

8-year-old #1: (in a whining voice because she has a belly ache caused by overconsuming chips) She’s laying on my sleeping bag and pillow!
8-year-old #2: (in an equally whiny voice) I like yours more than mine. Let’s trade.
8-year-old #1: I want mine! Make her give me mine!
Me: Everyone has to use their own sleeping bag. No one touch other people’s stuff. Your sleeping bag is your own personal, private property so you have the ability to exclude everyone else from your sleeping bag.
8-year-old #1: (whispering in my 8-year-old’s ear) What is your mom talking about?
My 8-year-old: (opens her eyes wide, glaring at me with that “please be quiet” look) Mooooooom!

Having multiple kids sleeping in the same tent naturally leads to a discussion about the right to include.

8-year-old #1: (tears streaming down her face) They won’t (sob) let me (sob) in the tent!
Me: Everyone in the tent come out.
Three girls come out, looking sheepishly.
Me: You can’t exclude anyone from the tent. Everyone gets the right to use the tent. The tent is like a public thing or a quasi-public thing. Everyone has a right to . . .
8-year-old #1: (no longer crying) Do y’all want to go fishing?
All 8-year-olds: YAY! (they run off)
Me: Sigh. (shotgun second beer)

Fishing brings us to a lesson in the rule of capture.

8-year-old #1: I caught a fish! I caught a fish! I caught a fish! (waiving around a fishing rod with a small bass hanging on the end, still stuck on the hook)
Me: Hold still and let me take the fish off the hook. (insert mild expletives under my breath as I get stuck by the hook while removing the fish) There! (throw the fish into the bucket that is holding all of the fish)
8-year-old #2: Ooooh! I want your fish! (sticks hands in the bucket)
8-year-old #1: She’s touching my fish!
Me: Don’t bother the fish. That’s her fish because she caught it. When you capture something that is a res nullius, like a wild bass, it becomes yours under the rule of capture. The rule of capture is really fascinating because . . .
8-year-old #3: We’re catching tadpoles over here!
8-year-old #1 and 2: FUN! (recently caught fish is dropped on the ground and jumps around, finding its way back into the lake before I can grab it)

Catching tadpoles with nets allowed for a lesson in future interests and, shocking as it may be, the RAP (or at least the fundamental ideas behind the RAP).

8-year-old #1: (to 8-year-olds #2 and 3) You can use the net now, but after y’all use it, you have to give it back to me.
8-year-old #4: I want a turn!
8-year-old-#1: I gave the net to 8-year-olds #2 and 3 and then I get the net back.
8-year-old #4: (looking at me) She won’t let me have a turn!
Me: (looking at 8-year-old #1) You can’t control who uses the net that long after it’s been in your possession. You can only control the use of the net for 21 minutes after your possession of it because otherwise you would be exercising too much long-term control over the net and for the good of all of us on this camping trip, we want the net to be more transferable and usable by lots of different people so . . .
8-year-old #2: People are going hiking! Let’s go! (drops net into the lake such that I have to wade in to grab it)

Eventually, the fishing, tadpole-hunting, and hiking came to an end and we commenced roasting weenies and s’mores. I brought with us some long roasting sticks and put them out for the girls to use, which prompted a good discussion on adverse possession.

8-year-old #1: (tugging on my shirt while pointing at essentially all of the other 8-year-olds) She took my roasting stick!
Me: (thinking “why did I agree to be the Brownie Troop leader?”) Are you sure it was yours?
8-year-old #1: (confidently) Yes! (pointing aimlessly at the table behind her) I put my stick on this corner of the table three hours ago and told everyone not to touch it, but she (again, pointing at the collective group) picked it up and has been using it to roast two hot dogs and four marshmallows.
Me: (taking a deep breath) She’s been possessing the stick for a pretty long time. I think the stick is now hers. After you adversely, physically, openly possess property for a long enough period of time, that property becomes yours.
8-year-old #1: That’s not fair.
Me: I know it seems unfair, but there are a lot of reasons we say the adverse possessor gets the property. It requires you, the true owner, to pay attention to your marshmallow roasting stick instead of just leaving it, unattended on the table. It creates stability in title so 8-year-old #2 eventually can be confident the roasting stick she’s using is hers and won’t be taken away. It encourages her to use the roasting stick and develop it, shape it, bend it, into the best roasting stick she can make . . .
8-year-old #1: Chocolate!!!! (runs off when a new box of Hershey chocolate bars is opened)
Me: Sigh. (realizes beer is not strong enough so opens up flask of bourbon)

Finally, we all learned about the virtues of easements.

Me: Okay girls, everyone get in their sleeping bags and close their eyes. It’s time to go to sleep.
8-year-old #1 moves her sleeping bag to be right in the pathway I’ve created for the girls to exit the tent
Me: Put your sleeping bag back where you had it. We need to leave a pathway for folks to get out of the tent.
All 8-year-olds in unison: (in a voice that says “I’ll do anything to stay awake a little longer, even listen to your crazy lectures”) Why?
Me: Well, someone may need to potty in the middle of the night, so we need to have an easement so y’all can exit the tent. When you have an easement, you cannot block the use of that easement because . . .
All 8-year-olds: Zzzzzzzzzzzzzz.

There you have it. Property 101 through the eyes of an 8-year-old. We didn’t quite cover everything—I haven’t yet figured out how to work mortgages into the conversation—but we covered a lot. The conversations didn’t go exactly as I’ve described above. The girls were not nearly this whiney, in fact they were all actually pretty good, and while I'm not a particularly cool mom, I am a cool enough mom to not mention Garrett Hardin to my daughter’s friends. But all of the general activities described above did occur and the girls had a great time, which may be more than I can say for all of my 1Ls. Who knows, maybe they even took away a few lessons in property law.

Sally, this was delightful! And just what I needed after slogging through the grading of 100 1-L Property exams. Thank you.

This is great (and funny)!

But who are the lives in being?

For an eight-year-old girls, the only person that matters is her, so one must measure off of her life/use.