A Look at the Latest Mortgage Foreclosure Data: On the Rise 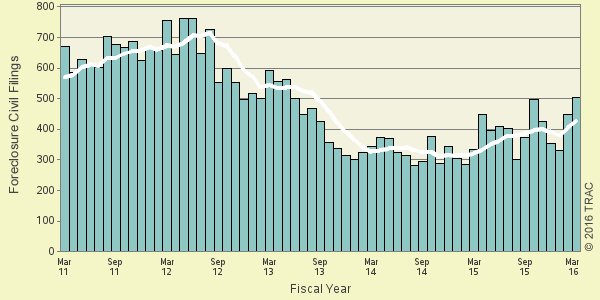 The Transactional Records Access Clearinghouse (TRAC), housed at Syracuse University, is a super helpful organization that I've used for a number of years now. The group issues TracReports that provide free monthly information on, among other things, civil litigation throughout the U.S. federal district courts. One item of interest that the group reports on deals with the number of new foreclosure filings each month. Check out this latest report:

The latest available data from the federal courts show that during March 2016 the government reported 505 new foreclosure civil filings. According to the case-by-case information analyzed by the Transactional Records Access Clearinghouse (TRAC), this number is up 12.7 percent over the previous month when the number of civil filings of this type totaled 448. The comparisons of the number of civil filings for foreclosure-related suits are based on case-by-case court records which were compiled and analyzed by TRAC (see Table 1).

When TRAC last reported on this matter, foreclosure lawsuits had declined from a peak reached in May and June of 2012 but seemed to have bottomed out in January 2014. Indeed, as can be seen in Figure 1, the monthly count remained relatively stable from that point until about a year ago. When foreclosure civil filings for March 2016 are compared with those of the same period in the previous year, their number was up by nearly one third, or 32.7 percent. Filings for March 2016 are still substantially lower than they were for the same period five years ago however. Overall, the data show that civil filings of this type are down 25.1 percent from levels reported in March 2011.

Relative to population, the volume of civil matters of this type filed in federal district courts during March 2016 was 1.6 per every million persons in the United States. One year ago the relative number of filings was 1.1. Understandably, there is great variation in the per capita number of foreclosure civil filings in each of the nation's ninety-four federal judicial districts. Table 2 ranks the ten districts with the greatest number of foreclosure lawsuits filed per one million population during March 2016.

Recent entries to the top 10 list were Vermont, the Northern District of Georgia (Atlanta) and the Western District of Kentucky (Louisville), which are ranked seventh, eighth and sixth, respectively.