Where Does All That Mortgage Settlement Money Go Anyway? 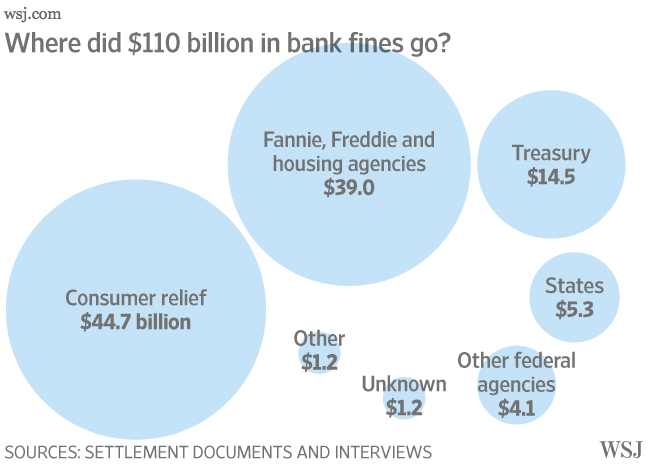 Late last week the Wall Street Journal published a story (behind a paywall) that many of us mortgage finance enthusiasts have been waiting to read. Since the 2008 crash various state attorneys general, the U.S. Department of Justice, and numerous federal agencies have taken aim at the fraudulent foreclosure, lending, and mortgage servicing activities of many of the nation's largest financial institutions. According to this WSJ story, the total amount paid by banks to date from mortgage-related litigation has been roughly $110 billion. To put that in perspective, the total amount of money allocated by Congress in connection with the Troubled Asset Relief Fund of 2008 (TARP) for purposes of  aided homeowners was $45.6 billion (out of the program's total $700 billion). The HAMP program (which was supposed to help troubled homeowners get loan modifications) was $30 billion of that amount. And, as an aside, most people know that HAMP was a miserable failure with very little actually getting spent on loan modifications. In fact, of the total 45.6 billion set aside in TARP for housing programs, as of the end of 2015 only $19 billion has actually been spent.

So if all this mortgage litigation was geared toward getting justice for homeowners, where did all that money go? Well...one would assume that it went to homeowners--those most hurt by these abusive practices. But if that's what you thought then you'd be wrong. As indicated below, a great deal of this money went to a host of different parties to fund activities far removed from the everyday struggles of the victims. Some of the funds went to fill gaps in state budgets, others went to pay for state fairs, while yet more went to subsidize the cost of local police forces. The Fiscal Times reports on the WSJ piece and breaks-down the distribution of proceeds as follows:

All of the $34 billion recovered by mortgage giants Fannie Mae and Freddie Mac for being sold fraudulent mortgage securities gets swept into the U.S. Treasury, by law. Some of the federal agencies receiving settlement funds also send those to the Treasury. So in fact, the biggest bubble should be the government’s general fund, with nearly $49 billion in proceeds from the settlements. * * *

The Justice Department also collected “at least $447 million,” according to the report, despite their office building not being under threat of foreclosure either. States received $5.3 billion, but had no obligation to deliver any of that to housing-related programs. In fact, well over half of the $2.5 billion given to states in the 2012 National Mortgage Settlement went to plug budget holes. And the Journal article finds that bank-settlement money built horse stables in New York and funded email accounts in Delaware.

As for that $45 billion bubble of “consumer relief,” this is where the chart is perhaps at most variance with the facts. These were not hard dollars, but credits given to banks for performing certain activities. Many of those activities had nothing to do with rescuing borrowers from foreclosure. Banks got credit for bulldozing homes, donating homes to charity and giving homeowners small amounts of move-out money — routine things banks do anyway for public relations purposes.

Nearly one-quarter of the “relief” in the National Mortgage Settlement came from short sales, in which the bank forgives the difference between the price a distressed homeowner can fetch for their home and the amount they owe on the mortgage. Short sales can be beneficial, but they result in the homeowner losing the home. More people lost their homes in these settlements than saved them.

Even the “relief” that allegedly went to homeowners doesn’t tell the whole story. Banks could get credit by “extinguishing” long-delinquent second mortgages whose real value was $0, since there was no chance of repayment. Banks got credit in the Independent Foreclosure Review settlement administered by the Federal Reserve for the total amount of the mortgage they modified. In other words, if they reduced the principal on a $500,000 mortgage by $1, they got credit for $500,000 of “consumer relief.” That distortion is included in this calculation. Far fewer homeowners benefited from these settlements that it would appear at first glance.

It should also be emphasized that the top-line number of $110 billion in “penalties” doesn’t resemble what the banks actually had to pay. Most of the settlements were tax-deductible, reducing the total value by billions of dollars. Banks reduced principal balances on loans they only serviced and didn’t own, paying their fines with other people’s money. They could get HAMP incentive payments for loans they modified as part of the settlements. Banks even got credit in some settlements for issuing loans in low-income communities, a money-making activity (I’ve referred to this as akin to a bank robber being sentenced to open a lemonade stand).

The findings in the report are startling, but not entirely surprising. Considering how few of the funds earmarked for housing relief under TARP actually helped homeowners-in-distress (or were even spent at all), it's not a huge surprise that the government has not been very effective in distributing the proceeds from these various mortgage settlements.

There are some interesting comparisons to be made here with regarding to how other large-scale settlement funds have been used in the past. For instance, consider the 1998 Tobacco Settlement between the country's four largest tobacco companies and 46 state attorneys general. Under the settlement the defendants agreed to make continuous payments to the states in connection with the medical costs they incurred from the health hazards of smoking. The funds from this settlement have gone to pay for educational and health-related programs, but not without criticisms of the money's long-term handling. More recently (and closer to home) we can look to the handling of funds from the BP oil spill. The $20 billion settlement is earmarked to, among other things, go to state and local governments for their economic loss claims, for habitat restoration and wildlife conservation, for water quality enhancements and recreational opportunities, and for deposit into a reserve fund for future spills. The effectiveness of this distribution plan remains to be seen.

The bottom line is that in order for a settlement of any large scale wrong-doing to be effective the voices of the victims and those who advocate on their behalf must be heard first and foremost. Judging from the way in which the billions in mortgage settlement funds have been spent so far, those voices seem drowned out.