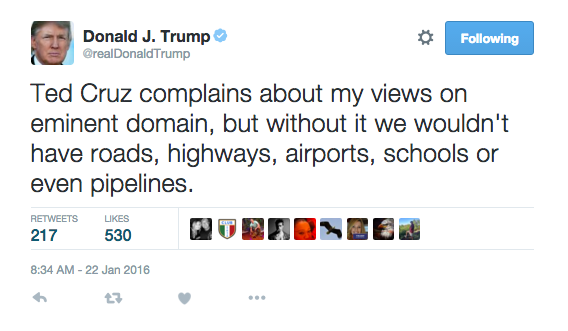 As promised, today we begin looking at presidential contenders and their statements regarding property rights. Lots of media coverage today is focused on the GOP battle to—depending on your political preferences—either crown Trump the party nominee or stop him from putting an albatross around the Republican Party’s neck.  So today we’ll focus on the man everyone else is focusing on today, Donald J. Trump, otherwise known as Mr. Eminent Domain.

Trump has made it no secret: he loves women, he loves the poorly educated, and he loves eminent domain. Here is an excerpt from a 2015 National Review article:

“I fully understand the conservative approach, but I don’t think it was explained to most conservatives,” Trump said in an interview with Fox News’s Bret Baier that aired yesterday. “Nobody knows this better than I do, because I’ve built a lot of buildings in Manhattan and you’ll have twelve sites and you’ll get eleven and you’ll have the one holdout, and you end up building around them. I know it better than anybody.”

Trump’s position on eminent domain has not evolved over time like some of his other positions, by his own admission, have. In 1998, one of Trump’s holdings, Trump Plaza Associates, was a plaintiff in a lawsuit in New Jersey regarding eminent domain. In Casino Reinvestment Development Authority v. Banin—which occurred before Kelo—Trump and the Casino Reinvestment Development Authority sought to take private property in Atlantic City to build a hotel and casino. Being before Kelo, Trump lost and the private landowners got to stay. (As a side note, the Banin case demonstrates the age-old rule that everything has a price. Three landowners stood up to Trump, turning down the state’s offer to take their property for $700,000. Eight years after the litigation ended, the landowners did sell the property to Trump for an alleged $2,000,000.)

Ilya Somin (George Mason) had an interesting article in the Washington Post regarding Trump’s view and history of eminent domain. Suffice it to say that Trump believed in eminent domain twenty years ago and he believes in it today.

Not all of the candidates were as excited about Kelo as the Donald. Assuming there are still five GOPers and two Dems after tonight’s results come in, we’ll continue this post on Friday with a look at what other presidential candidates have said on the topic. Until then, everyone can make the Fifth Amendment great again. Or keep it great, which I guess is more in line with Trump’s position.