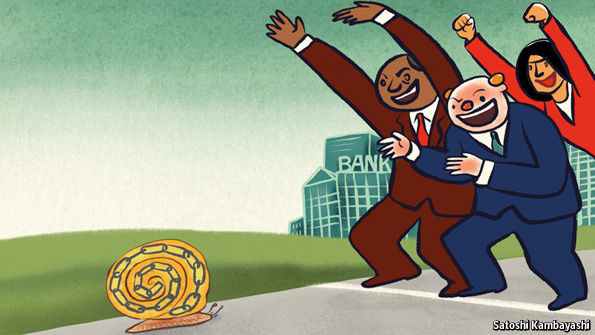 It's safe to say that much of the Bitcoin mania has settled down over the last few years, but that doesn't mean that there's nothing more to discuss. While most commentators and policy advocates state (and I believe rightly so) that Bitcoin and other cryptocurrencies will never truly come to displace (or even significantly compete) with fiat currencies, the true value that can be derived from the Bitcoin system is in fact the technology that underpins it: the blockchain. Joshua Fairfield (Washington & Lee) makes this case very compellingly in his recent article, BitProperty (give it a read!).

Now, before I go any further let me say that an explanation of how the blockchain works would take some serious time and even my best attempt would likely leave much to be desired. But lucky, like so many things in life, there's a YouTube video that explains it all! Take a look:

So why does any of this matter? Well, there's been a recent and strong interest by banks and financial institutions in how the blockchain system might be used to track ownership interests in property. The Economist did a story this past week about what some of these firms are up to:

It is easy to see why bankers get excited about distributed ledgers. Instead of having to keep track of their assets in separate databases, as financial firms do now, they can share just one. Trades can be settled almost instantly, without the need for lots of intermediaries. As a result, less capital is tied up during a transaction, reducing risk. * * *

Besides, embracing the technology allows big banks to appear innovative. For the most breathless evangelists, it holds out the prospect of liberation from all the dross that has accumulated in the financial system, from incompatible IT systems to expensive intermediaries. “For many, the blockchain is the Messiah,” says Gideon Greenspan, the founder of Coin Sciences, a blockchain startup based in Israel. * * *

[T]echnical hurdles can be overcome only with a high degree of co-operation between all involved. But this is not a given in the highly competitive world of finance. Some efforts are already under way. More than 40 banks now have a stake in R3 CEV, a startup meant to come up with shared standards. Similarly, firms including IBM and Digital Asset Holdings have started the Open Ledger Project to develop open-source blockchain software.

The Open Ledger Project may have trouble combining the bits of code its members contribute. Such problems will slow adoption, notes Tolga Oguz of McKinsey, a consultancy. Moreover, most projects are still “proofs of concept”. Only a few services have gone live. A dozen banks are using a firm called Ripple to process international payments cheaply. In August Overstock.com, an online retailer, announced a “smart-contract” platform, as did Symbiont, another startup. In January NASDAQ, a stock-exchange operator, launched Linq, a service that allows companies to issue debt and securities. It also plans to initiate a blockchain-based e-voting service for shareholders in firms listed on its exchange in Estonia.

Then there are more specialised services. Everledger uses a blockchain to protect diamonds by sticking data about a stone’s attributes on it, providing proof of its identity should it be stolen. Wave, another blockchain startup, encodes documents used in global supply chains, reducing the risk of disputes and forgeries.

More applications will pop up this year and next. Prime targets will be self-contained markets with complex products, many participants and convoluted procedures. One example is syndicated loans, which can involve dozens of lenders and which can take as long as a month to negotiate. Symbiont recently teamed up with Ipreo, another fintech firm, to automate such loans using smart contracts. Another tempting target is trade finance, which still requires lots of paperwork to travel around the globe along with the goods being sold.

For property law scholars, the emergence of the blockchain comes at an interesting time. There's a recent and fascinating article by Abraham Bell (Bar Ilan/San Diego) and Gideon Parchomovsky (Bar Ilan/UPenn) titled Of Property and Information that advocates for a renewed scholarly interest and debate on the importance of registries. As they note, "In the past, discussions of registries used to be a core topic in property classes and a focal point for property scholarship. In recent decades, registries have lost their luster for scholars, and their discussion has been relegated to the innermost pages of property textbooks. The reason for this is that registries are widely considered the domain of legal practitioners, not of theorists."

I agree with Bell and Parchomovsky and applaud their work on this topic. To that point, it strikes me that the move toward a distributed ledger system for the recording of interests in property has the potential to breathe new life into the academic exploration of the role that registries and information play in property law. And this move toward a "trustless ledger" system (HT: J.A. Fairfield) is not limited to merely intangible personal property like securities or credit rights.  Rather, some countries are actually looking to move their entire paper-based land registry system to a blockchain model. Honduras is already in the process of working with a Texas company to build a permanent and secure land title registry system using blockchain technology! The possibilities are endless and ripe for scholarly commentary. More to come in this area, for sure!