This past weekend, weather and stream flows cooperated enough that I could justify spending a day chasing steelhead. The high winter flows do challenge my already limited angling skills, so I spent the day searching for any kind of structure or rocks that could make the river smaller and more approachable—at least from a fly fishing perspective—and give me a slightly greater than zero chance of finding a fish. I finally found what I was looking for, immediately behind a sign declaring “Private Property.”

Two characteristics largely define the Interior West—public lands and aridity. This combination makes for some complicated land use conflicts. In an arid environment, both people and animals congregate on the same land—land near water—and the public lands landscape affects our ability to disperse by limiting land available for human settlement. Thus, despite the millions of acres of public lands in the West, much of the land use conflict occurs not on public lands but within the private landscape where we congregate.

Private western lands are private precisely because they were the most productive or attractive, and in many ways they provide the best wildlife habitat or ecological services. In some cases, they also provide the best recreational opportunities. While the public’s perception of the Interior West might focus on federal lands issues, the private lands are an increasingly significant source of both conflict and opportunity.

And lost in the stories of the West’s public lands are the thousands of examples of private landowners not only protecting or restoring their land, but also allowing the public to hunt, fish, and recreate on private property.

In the past year, while wandering around Idaho, I have squeezed through gates, walked across farm fields, followed “secret” trails below cabins, and parked along private logging roads. In each case, I was crossing or using private property to find places to fish. And in each case, I was doing so with permission of the private landowner. The two photos at the top of this essay were taken on neighboring parcels near a small stream just southwest of Yellowstone National Park—I respected the requests of both and enjoyed a memorable day of fishing with my brother. I have also spent literally hundreds of hours running, hiking, and mountain biking on publicly-accessible private forest lands near Moscow, Idaho.

In one sense, surprisingly, this notion of public “rights” in private places is embedded within western culture. The state of Montana guarantees all residents the right to use any stream that is subject to recreational uses, regardless of the ownership of underlying lands. Idaho is slightly less permissive, in a formal if not practical sense, providing that all streams capable of floating a six-inch diameter log or being “navigated by oar or motor propelled small craft” is a public highway available for fishing, boating, or other recreational purposes. Somewhat unexpectedly, Colorado—despite being arguably more progressive in some areas than other western states—has what might be the most restrictive stream access regime, potentially allowing private landowners to completely prohibit anyone from passing down “non-navigable” streams, whether they touch the bottom or banks or not (this might be an understatement, but the issue remains somewhat contested in Colorado).

These examples might seem minor, parochial, or insignificant in the broader public lands context. But two of the greatest conservation successes in the West were the result of private landowners acting to protect public rights. When people park along the roadside at the Cathedral Group viewpoint in Grand Teton National Park, what they are viewing—the Grand Teton and neighboring mountains—was originally protected by an Act of Congress in 1929. But the land they are standing on where most visitors spend most of their time, down in the valley floor, was quietly and somewhat secretly purchased by John D. Rockefeller, Jr. and later transferred to the federal government (with some significant opposition) to expand the park. Across the Tetons in Idaho, the most famous stretch of a world famous trout steam—the Railroad Ranch reach of the Henrys Fork—flows through the old hunting and fishing retreat of the Harriman and Guggenheim families. In 1977, Averell and Roland Harriman donated the 11,000-acre ranch to the state of Idaho for use as a state park, providing for permanent public access to one of the world’s great fly-fishing destinations.

These stories, and my own experiences, came to mind this week when I received a call from a researcher investigating how to manage amenity-driven population growth in the rural West. She asked if I had any ideas for tools that would work to balance private and public interests, and my immediate (and admittedly cynical) reaction was that nothing would work—not until some fundamental change occurred in how the rural West perceives private property.

But immediately upon saying that, I thought of the “private property” sign I encountered while chasing steelhead. The bottom of the sign contained two additional admonitions. Not the expected “survivors will be prosecuted,” but rather the following: “please clean up after yourself” and “48 hour maximum stay.” This sign, on a private ranch at the end of a quiet, bumpy dirt road next to a famous steelhead stream, was a welcome sign.

Stories of private landowners offering public access to their lands might be more common outside of the western United States (in Wisconsin, for example, the state claims 25,000 miles of groomed snowmobile trails open to the public, most of them on private lands). But in the West, the stories of private landowners too often lean the other direction, focusing on those that seek to exclude rather than share. They thus overlook the fact that there are also stories of western landowners who have already accepted that cooperation—even with respect to their private lands—should be a fundamental characteristic of the rural West.

These are small stories, to be sure, but they are a confirmation that in some places in the rural West, different perspectives and attitudes are emerging (or in fact, were always there) on the relative rights of the public and private with respect to our land. And those different attitudes might allow for new approaches to developing the proverbial “society to match the scenery,” as long as we are willing to recognize them. At a time when stories of western lands are focused on the selfishness of a few, we should acknowledge that these stories of sharing are just as common.

And so taking advantage of this one example last Saturday, I walked past the private property sign to where I knew (ok, hoped) a steelhead would be waiting—a steelhead that would not be waiting for me on public land. 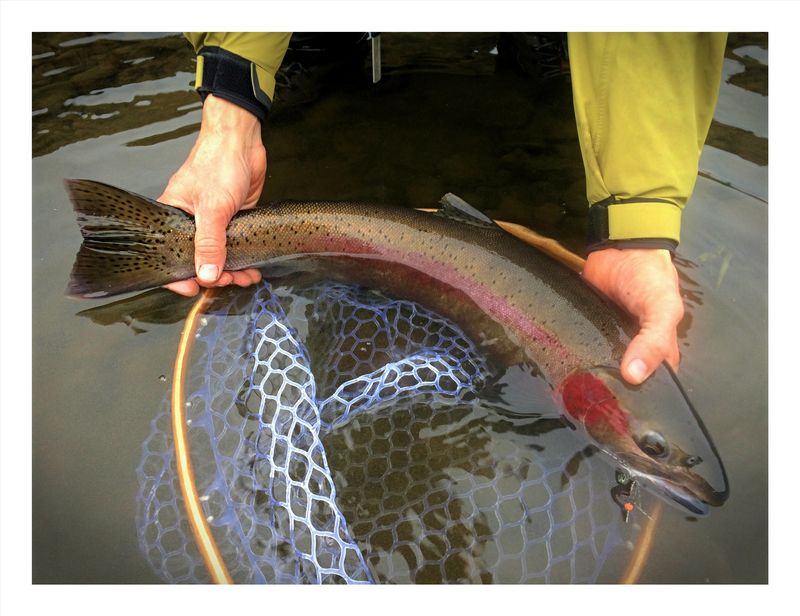