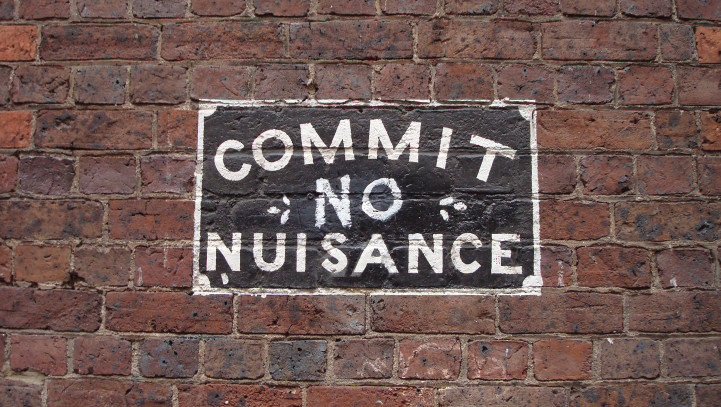 ProPublica recently came out with a story detailing how NYPD officials are using nuisance law to kick individuals out of their homes, largely based on groundless criminal claims that are ultimately dismissed in court. In at least 74 cases of nuisance eviction that were studied by ProPublica in partnership with The Daily News, residents agreed to warrantless searches of their dwellings (sometimes on an on-going basis) in order to be allowed to return to their homes. More importantly, the vast majority of these nuisance actions are falling on minorities. Over an 18-month study period, 9/10 homes targeted for nuisance abatement were in minority communities. The article notes that ProPublica "identified the race of 215 of the 297 people who were barred from homes in nuisance abatement battles. Only five are white."

This story raises some very interesting legal issues for property law professors in teaching nuisance principles. At the turn of the 20th century, nuisance law began to yield to zoning and land use restrictions, which were viewed as superior methods for regulating competing, adjacent land uses. In fact, in many cases zoning rules can preclude or at least diminish the validity of nuisance claims. For an excellent historical article on the progression of zoning and nuisance law in the U.S., click here.

The way nuisance law is being wielded in NY raises a host of policy and legal issues, spanning from fair housing, criminal procedure, constitutional law, and beyond. Here's an excerpt from the ProPublica article:

The nuisance abatement law was created in the 1970’s to combat the sex industry in Times Square. Since then, its use has been vastly expanded, commonly targeting apartments and mom-and-pop bodegas even as the city’s crime rate has reached historic lows. The NYPD files upward of 1,000 such cases a year, nearly half of them against residences. . .

A man was prohibited from living in his family home and separated from his young daughter over gambling allegations that were dismissed in criminal court. A diabetic man said he was forced to sleep on subways and stoops for a month after being served with a nuisance abatement action over low-level drug charges that also never led to a conviction. Meanwhile, his elderly mother was left with no one to care for her. . .

The NYPD has embraced nuisance abatement actions as part of its controversial “Broken Windows” strategy of aggressively pursuing low-level offenders to prevent more serious ones. . . Sidney Baumgarten, the former city official who commissioned the drafting of the nuisance abatement law in the 1970s, said it is now being abused. He is alarmed by the sheer volume of cases, especially those aimed at households in which no one has been convicted of a crime.

“I think it’s wrong. I think it’s unconstitutional. I think it’s over-reaching,” he said. “They’re giving up their constitutional rights. And why? Because they’re afraid they’re going to be evicted from their home, with their children. There’s a certain amount of compulsion, and threat and coercion, by the very nature of the process they’re using.”