Housing in a Time of Expanding Crisis @USFLaw

This past Friday I had the pleasure of participating in a symposium on Housing for Vulnerable Populations and the Middle Class: Revisiting Housing Rights and Policies in a Time of Expanding Crisis, hosted by the wonderful faculty and law review folks at the University of San Francisco School of Law (and a special hat tip to our very gracious host, Tim Iglesias). The timing of this gathering couldn’t have been better. 2015 was a busy year in the housing world as SCOTUS upheld the validity of the disparate impact theory under the Fair Housing Act and HUD issued its significantly updated regulations on the obligation to affirmatively further fair housing. Moreover, cities and local governments are being looked to more than ever to solve major and seemingly intractable issues around housing, spurring a host of new policies, programs, and initiatives. The impressive participants of the USF symposium (coming from practice, government, non-profit, and the academy) explored these and related issues, including potential solutions to pressing problems of housing. Here’s an overview of what the panelists had to say:

What’s the matter with housing?
Rachel Bratt (Harvard Joint Center) kicked off the day by giving an overview of the nation’s current housing woes. She noted that the increase in income inequality over the last 20 years, combined with disinvestment and misinvestment of public resources, has been at the core of the affordable housing issue. She also described how political spending has played a role in further entrenching existing housing interests (in 2015, $234M was spend on real estate/finance lobbying, second only to healthcare). Bratt also explained the uneven distribution of federal housing benefits to the wealthy and the continued persistence of concentrated racial segregation. Rosie Tighe (Cleveland State-Urban Affairs) followed by describing the particular housing problems facing so-called “shrinking cities” (those places in an intense population-decline). She noted that the issue for these cities has more to do with poor quality affordable housing, rather than quantity. Tighe described the failure of low-income housing tax credits to meet the needs of these locales, and discussed the need for more scattered-site developments in these areas, while recognizing the financing and property management challenges inherent in such developments. Peter Dreier (Occidental-Poli Sci) rounded-out the discussion by pointing out that the current political discussions around the presidential election have focused much on wages and other issues, but not at all on housing. He described some reasons for the absence of attention to this important area, and drew the strong connection between household over-all health and housing.

What’s the matter with our current solutions?
Chris Odinet (Southern) started the discussion by describing some current efforts by states and local governments to deal with the fall-out from the housing crisis and on-going issues of blight and abandoned property. He then explained a number of recent federal court cases and acts taken by the FHFA that have significantly frustrated these efforts and also seriously call into question the ability of states and local governments to be innovative in dealing with issues of housing when federal programs are involved. Michael Allen (Relman, Dane, & Colfax) discussed the Fair Housing Act and the new “affirmatively furthering” regulations. He went into depth on contemporary disagreements between affordable housing advocates (who support more affordable units) and fair housing groups (who support integrated housing, and advocated for a way to reconcile their views under the auspices of these new HUD regulations. John Infrana (Suffolk) followed by describing the types of housing in and changing household composition of many cities. Despite these changing demographics, however, housing has not kept pace. In connection with this, Infranca pointed to the many possibilities that micro-housing and accessory-dwelling units (ADU) provide in the way of meeting this need. He noted that ADUs allow for greater economic diversity and can better align with demographic trends, but noted current legal barriers to them such as occupancy requirements and zoning restrictions. Marcia Rosen and Jessica Cassella (both of the National Housing Law Project)) concluded the panel by discussing the current state of the public housing program in the U.S., noting that there are currently 1.2M units (and ever-declining). She described HUD’s recent efforts to give public housing authorities (PHAs) a financing tool to rehab and rebuild these properties through the Rental Assistance Demonstration Program (RAD). This program essentially allows PHAs to convert their public housing stock into section 8 funded housing, and to combine section 8 with tax credits and other forms of debt and equity financing to fund the project. Cassella stated that although the program has great potential in terms of revamping old and decaying public housing properties, there are draw-backs in the way of transparency and long-term funding stability.

What are some new solutions?
For this final panel, John Emmeus Davis (Burlington Community Development Associates) gave an overview of community land trusts (CLTs)—currently over 280 exist nationwide—and their successes across the country. He noted that these types of entities are usually most successful in communities where there would otherwise be no affordable housing available. He noted the ability of CLTs to empower communities, protect tenants, and provide street-level land reform. Andrea Boyack (Washburn) followed by noting the current lack of rental stock compared to the growing demand across the country. She pointed out that in 2015 over half of the population of the U.S. is renting, with an annual demand of 300K new rental units per year. She followed by describing some current statistical trends in American homeownership and posited a number of ways in which cities and states in particular can seek to achieve solutions to these major housing problems. Lastly, Lisa Alexander (Wisconsin) discussed the the human right to housing, not through the lens of federal law, but rather through the ways in which localities across the country are building legal structures that provide many of the rights associated with a right to housing. She noted that market participation has been important to this process, and she used the “tiny homes for the homeless” movement and community control of vacant land as examples.

You can watch each of these presentations by clicking on the youtube video above. Participants, moderators, and USF Dean John Trasviña (former HUD assistant secretary for fair housing) are pictured below. 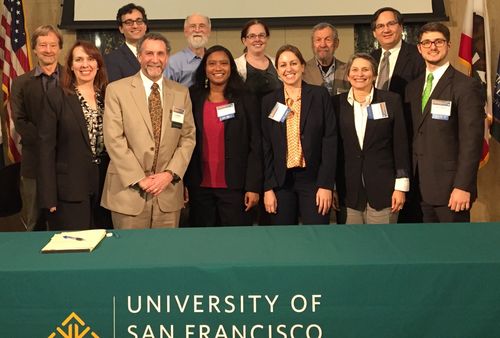