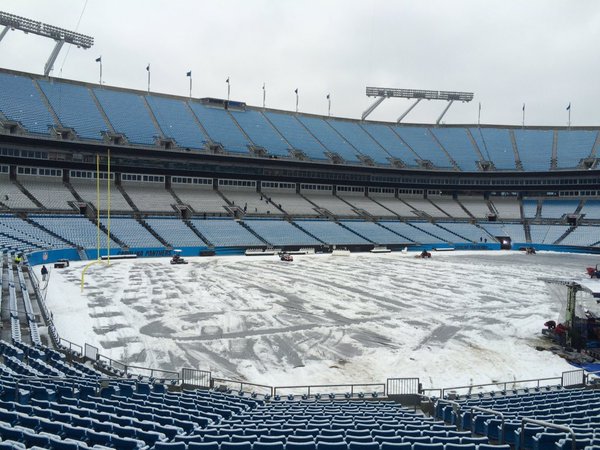 As an avid football fan, the end of January means one thing: the Super Bowl! My beloved Saints were out before the playoffs even began (though for those of you who teach Trusts and Estates, there are some interesting trust issues continuing to impact the team’s owner). But the lackluster Saints’ season has not stopped me from enjoying the playoffs.

While watching the pregame show for the NFC title game, there were numerous clips of snow being shoveled out of the Bank of America Stadium. Being born and raised in Louisiana, this is an odd sight. When I was in kindergarten, it snowed half an inch. We got off three days from school because my hometown of Baton Rouge had no means of dealing with the snow. The world of southern Louisiana is simply different than that of Charlotte, North Carolina.

Seeing the snow had me thinking about everyone who was, and remains, affected by last weekend’s blizzard and, of course, property law. Having lived in the District for a number of years in college and thereafter, I remember being vaguely aware that, as a lessee, I had some duty to shovel the snow from the sidewalk. Turns out the general recollections I had were right. D.C. Code § 9-601 requires that “[t]he owner of a residential or commercial property that fronts or abuts a paved sidewalk shall, within the first 8 hours of daylight after the ceasing to fall of any snow or sleet, remove and clear away, or cause to be removed and cleared away, snow or sleet that is in front of or abuts a building or lot of land to provide a path that is the entire width of the sidewalk, up to 36 inches wide.” This duty can be delegated to a “tenant, occupant, lessee, or other individual by written agreement,” hence why shoveling snow wound up in my lease. Not only does an owner or agent thereof have the duty to shovel snow, you can be fined if you don’t! See D.C. Code § 9-606 (providing for a fine of up to $25). Boy is this Louisiana girl happy the snow police didn’t patrol too regularly the 3800 block of T Street!

This had me wondering how snow was treated in other jurisdictions, so I did a little digging through snow-related statutes. Some states and municipalities follow the D.C. idea of requiring owners of property to remove snow from the sidewalks abutting the owner’s property. See N.J. Stat. 40:65-12 (allowing governing bodies to pass ordinances requiring owners to remove snow from sidewalks); S.D. Cod. L. § 9-30-5 (same); Conn. Gen. Stat. § 7-163a (same); Wilmington, DE Code § 46-418 (requiring occupant, lessee, or owner to remove snow from half of the sidewalk); Englewood, CO Code § 11-3-2 (same). Some of these jurisdictions impose fines for failure to comply—e.g., failure to remove snow in Wilmington, Delaware will get you a fine of $1 per linear foot of uncleared sidewalk, see Wilmington, DE Code § 42-417(a)—and at least one jurisdiction has even arrested an individual for failing to shovel his sidewalk. See Murray v. City of Sioux Falls, 867 F.2d 472 (8th Cir. 1989). Some jurisdictions impose broad duties on landowners to remove snow, e.g., Detroit, MI Code § 50-8-26, while some jurisdictions relieve neighboring owners of any liability to third parties who injure themselves on the sidewalk so long as the owners attempt to remove snow, e.g., 745 Ill. St. Ch. 70/2. Bottom line: every jurisdiction deals snow removal a little differently.

This brings me to property law—every jurisdiction does it a little differently. Sure, there are general principles, but states’ and municipalities’ enactment of those general principles is all a little different. The lead article in the current edition of Property and Probate highlights this with regards to adverse possession law in states east of Mississippi River. How boundary lines are established varies from jurisdiction to jurisdiction. Rules governing servitudes are state specific. To borrow from the late Tip O’Neill, all property law is local.

General principles regarding property law are undoubtedly important, but their local application cannot be forgotten. Just like in football. General principles are important—both the Broncos and the Panthers need to block, pass, run, kick—but the way each team applies those general principles will determine who takes home the Lombardi Trophy on February 7.