No More Snow Chairs in Boston? 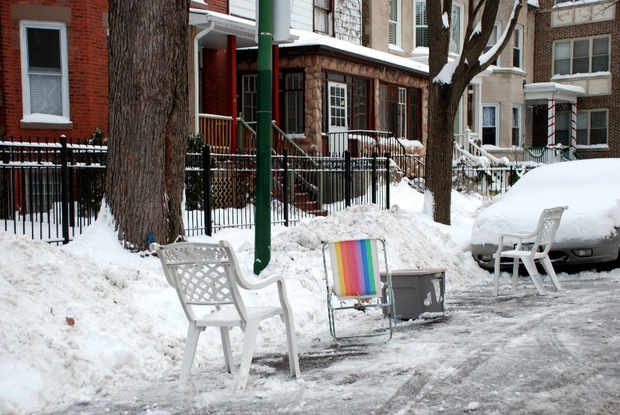 Kriston Capps hates hates hates the practice of saving spots after a winter's snow, and she details one neighborhood's attempt to stop it:

This winter, Boston's South End neighborhood embarks on a bold experiment in social engineering. With the mayor's blessing, The Boston Globe reports, the neighborhood has banned the popular practice of "dibs."

[...] The administration of Boston Mayor Martin J. Walsh recognizes space-saving as a "guideline," despite the fact that this guideline is enforced by vandalism.

But now, South End, which may have learned of the practice from the fearsome vigilance of South Boston residents, is turning a page. "We Don't Do 'Dibs' Here," read posters hanging in South End now, sounding as much like an advisory notice to South End residents as to hapless visitors who may be trying to find parking there.

It's hard to imagine that any neighborhood association can succeed (in this case, the South End Forum) where even mayor fears to tread. Former Mayor Thomas M. Menino accepted the practice of space-saving, although his administration limited it to 48 hours from the end of a snow emergency. Which is weird, when you think about it: a city official acknowledging that, for two days after a snowstorm, citizens will key one another's cars over parking spots.

Listed below are links to weblogs that reference No More Snow Chairs in Boston?: